Comments on Construction. Some minor fit issues with the sides and ends but nothing major. My kit had a  flaw in the casting of one side which was easy to fill. Other than that flaw the casting is quite crisp. At least one other report of poorly cast pieces in one of these kits has also been advised, hopefully no others are still in circulation

Other Comments. All doors and hatches are cast shut. I added some rungs made from wire onto the sides, door handles, and grab handles on the turret roof.

Its reported that 6 heavy scout trains were operational late in the war, each had 2 of these artillery cars, as well as infantry cars and command cars which are basically the same hull, minus the Panzer III turret. These heavy scout trains also had anti-aircraft wagons and Panzertraeger cars with demountable Panzer T-38s attached. 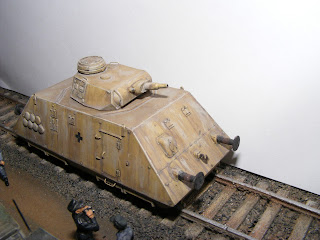 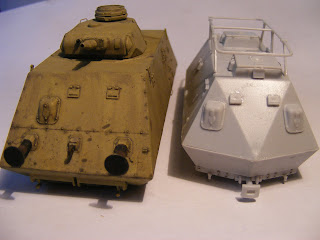 Comments on Construction. No fit issues. Frame aerial needed a scrape to remove a cast line around its edges. Kit lacks the double row of rivets around the bottom of the hull, and the headlight ports at each end, and door handles. These were all added in the build, and an aftermarket set with these parts is available for those not wishing to make their own. I also cut open some of the view ports

Other Comments. Four light scout trains were operational late in the war. Each train was made up of ten of these cars. The trains could be split into smaller sections, the minimum being two cars (for mutual protection & mobility should one break down or become disabled). The cars carried also carried a small infantry component. 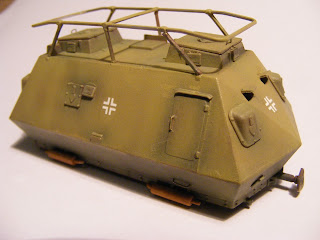 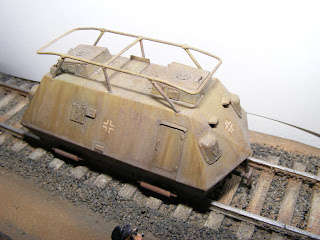