I had seen this kit on the web, and was pleased to see it stocked in my Local Hobby Store, so picked one up.  I'm a fan of french WW2 armour, and given the wide variety of french armoured vehicles that existed in that era, as a whole french armour (and softskins) really are very under represented in small scale in plastic.

Its well known that the germans inherited large numbers of french armoured vehicles in 1940 and put them all to use. Some went to german allies in eastern europe, some went to the balkan regions on anti partisan & security duties, while others remained in France on garrison duties. Numbers were still in France in 1944 after the D Day landings.

In the box. In the box are two sprues of parts sufficient to make up two tanks. One set of brass parts, one sheet of decals, one instruction sheet. The parts are well cast, and flash is virtually non existent. Two options for main armament are provided for each tank. Two german style turret cupola options are provided with open and closed hatches for each tank. One rounded turret cupola option is provided which looks to be the original french style cupola - nice if you want to build one in french service, though no decals or painting options are provided if you choose to go that way. 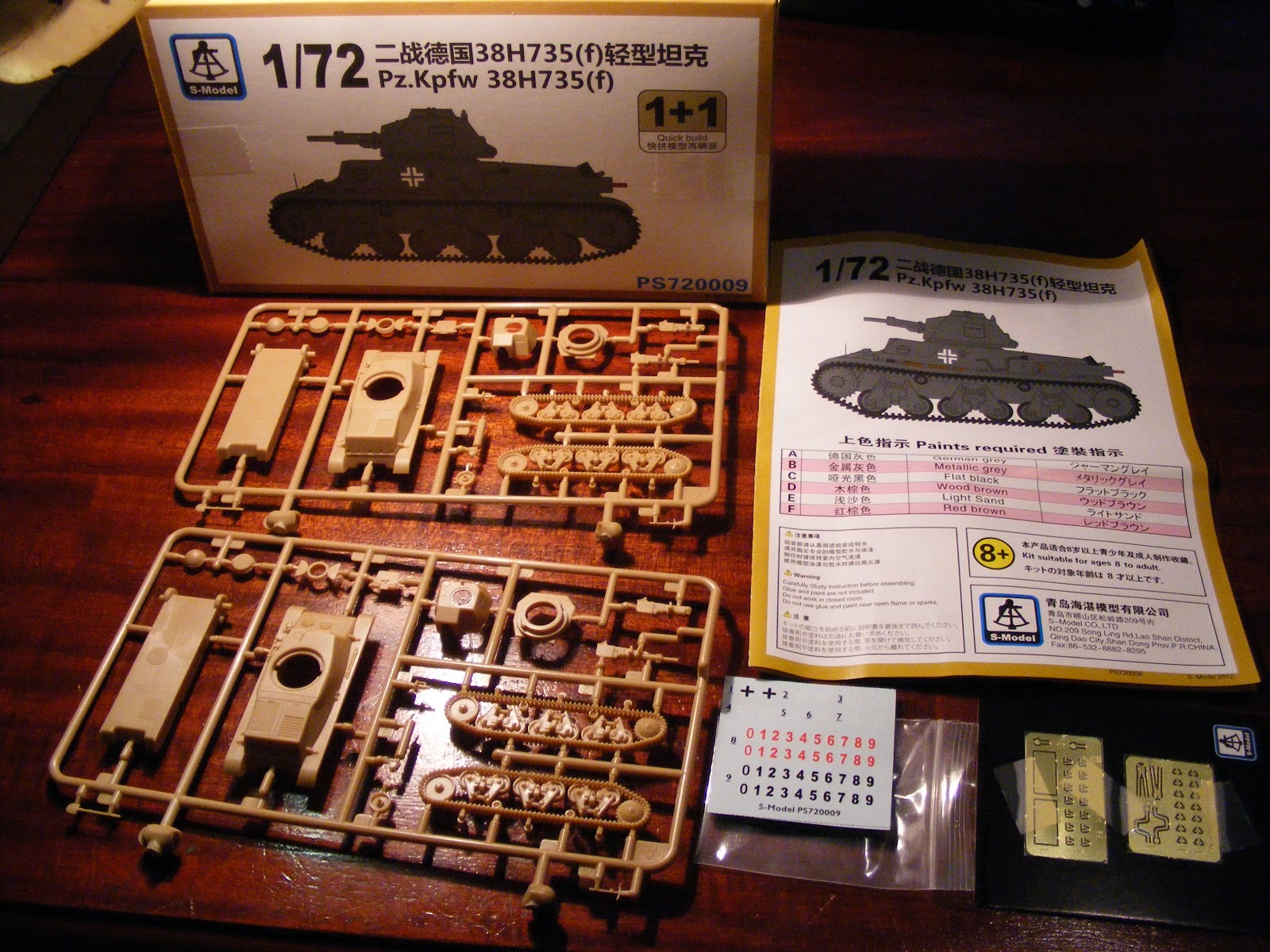 Scale. I don't often measure vehicles for scale, but in this case I checked the web for length and width. Assuming the published data is correct this vehicle scales very well to 1/72 scale, length is correct and width is perhaps 1 mm less.

The build so far. The build is very easy and everything fits very well (but is not finished).  The rear hatch hinges nicely, so can be open or closed, the hatch does not have to be fixed in place. Both barrel ends are already open, so no need to drill them out. The tiny letters 'HOTCHKISS' are cast on the bow of the vehicle.The body shell has a texture to it (it is not smooth) which gives it a kind of cast metal patina. 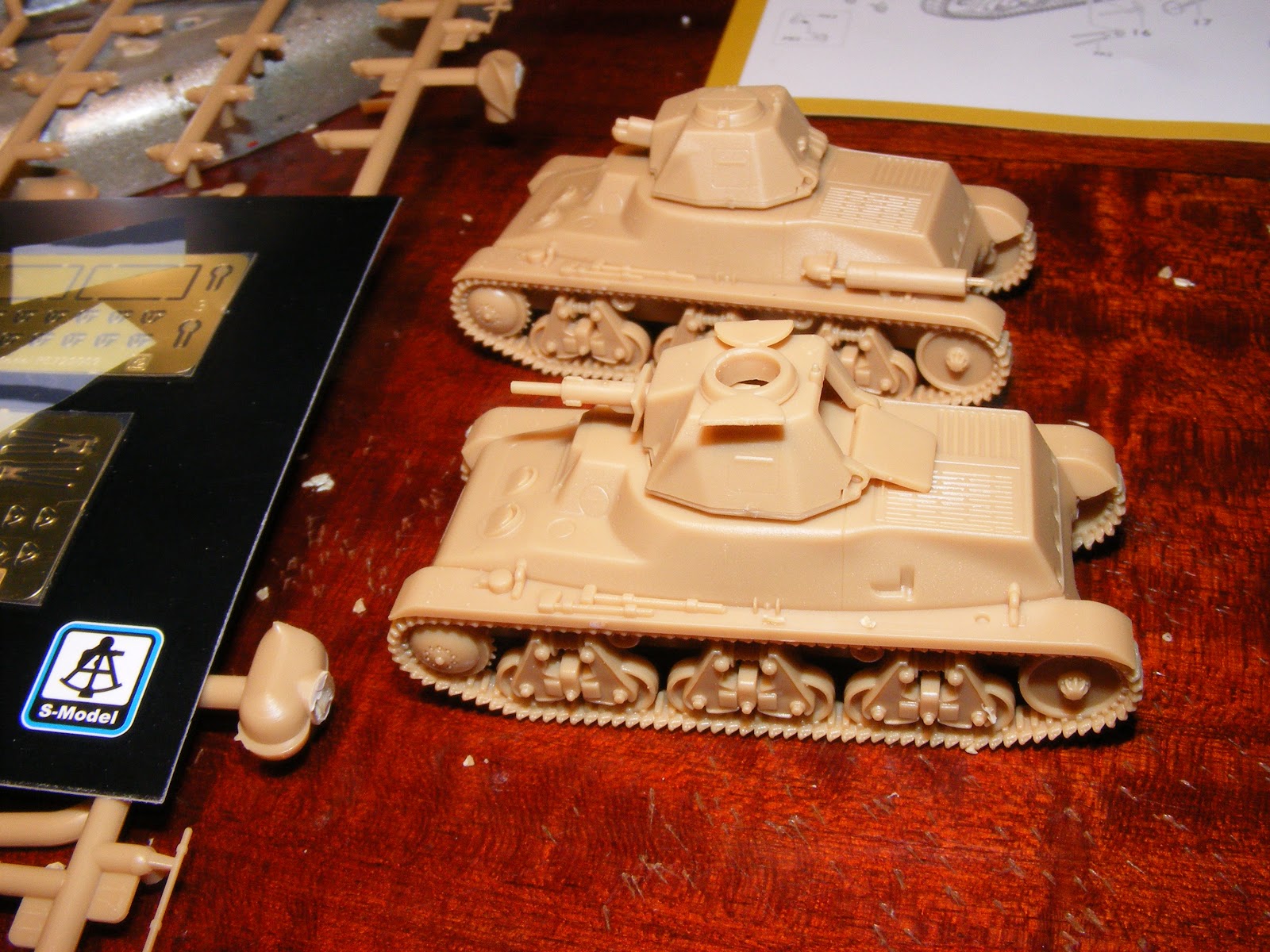 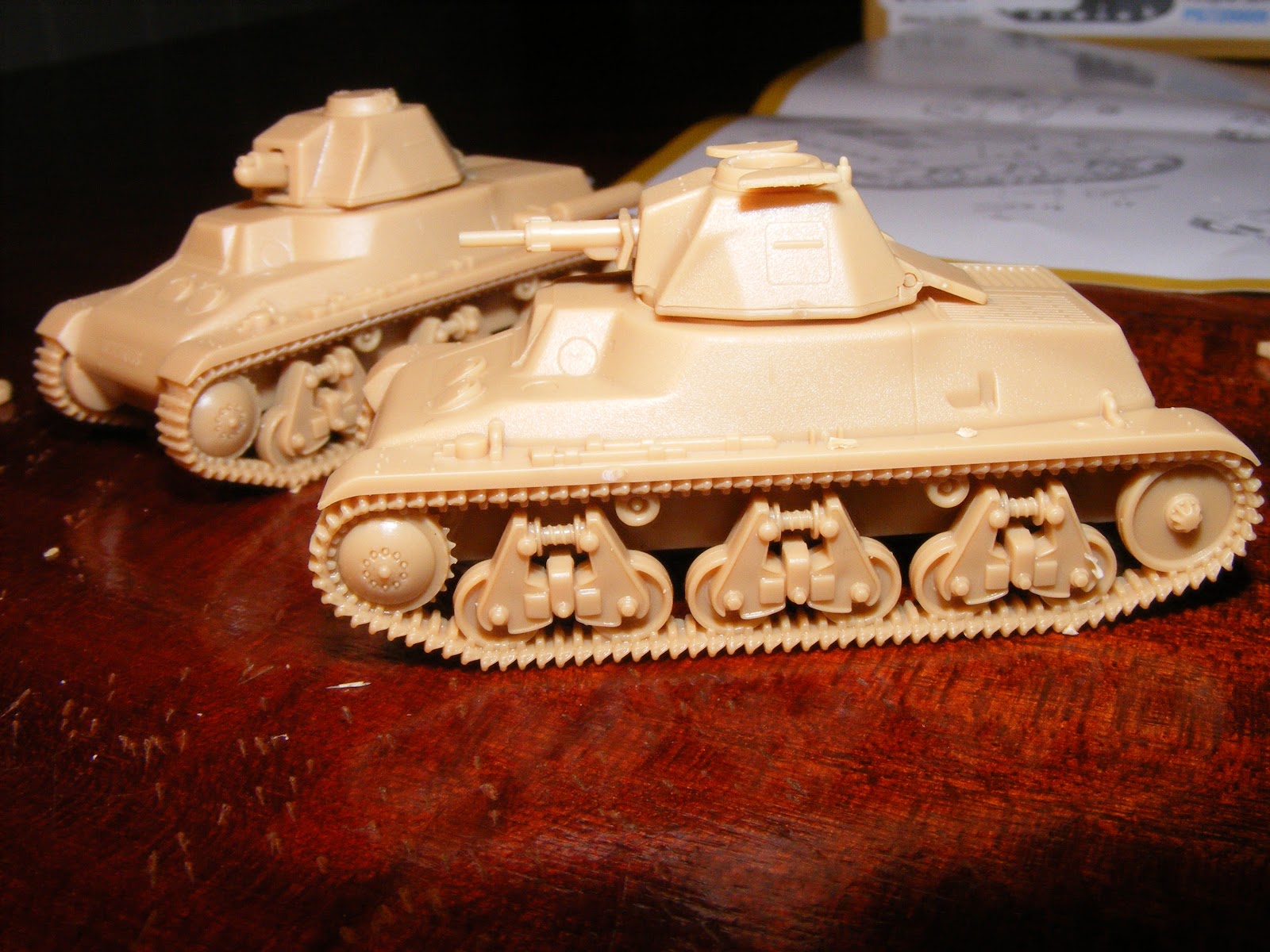 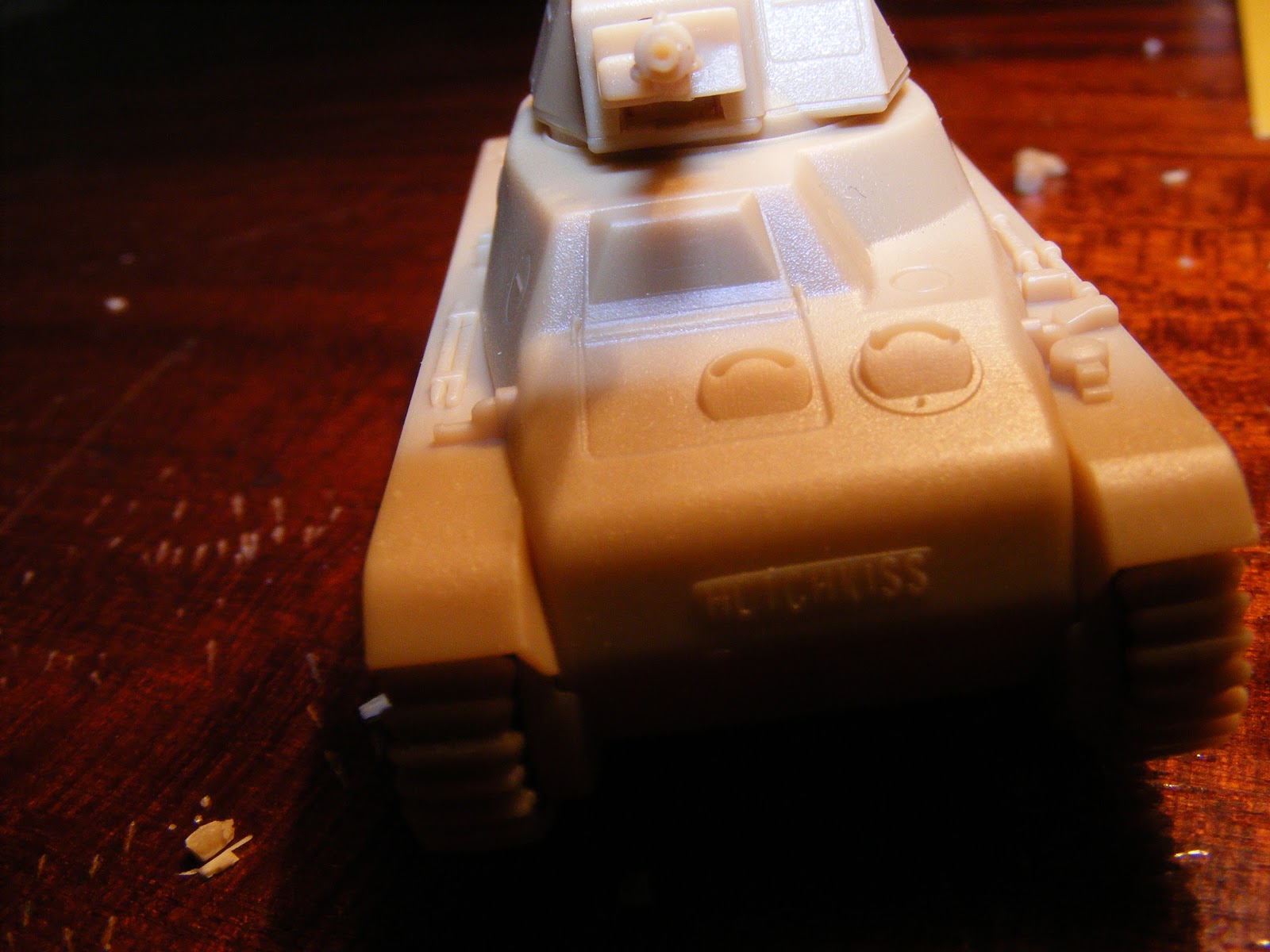 Update 22 December 2012. I have now attached the front and rear etch towing hooks and shackles, and also the hook and shackle on each side. These are very tiny and were the most time consuming part of the build, and are held in place with a tiny droplet of liquid CA glue, applied with a tooth pick. The etch covers for the exhaust muffler were also rolled and affixed. 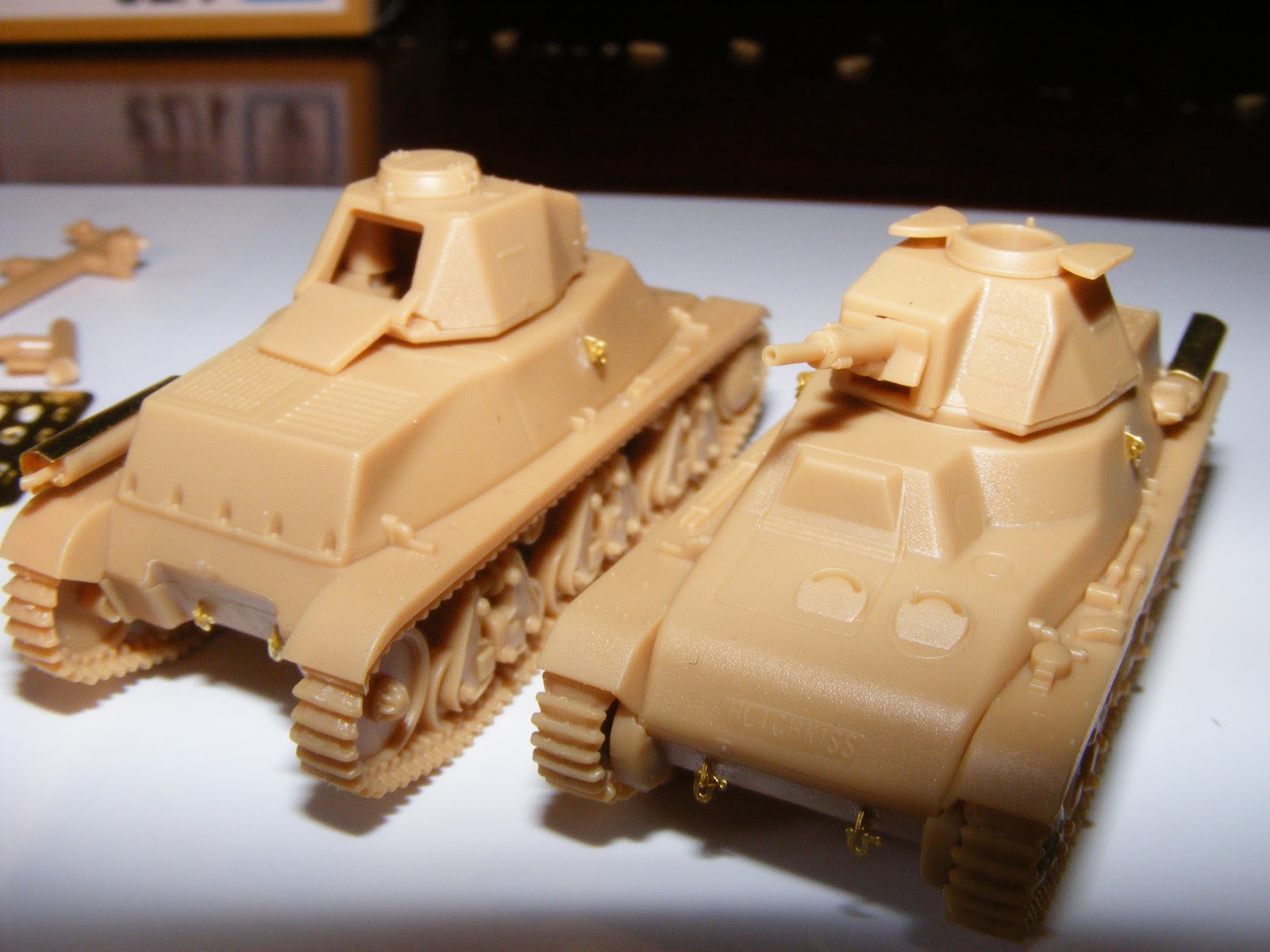 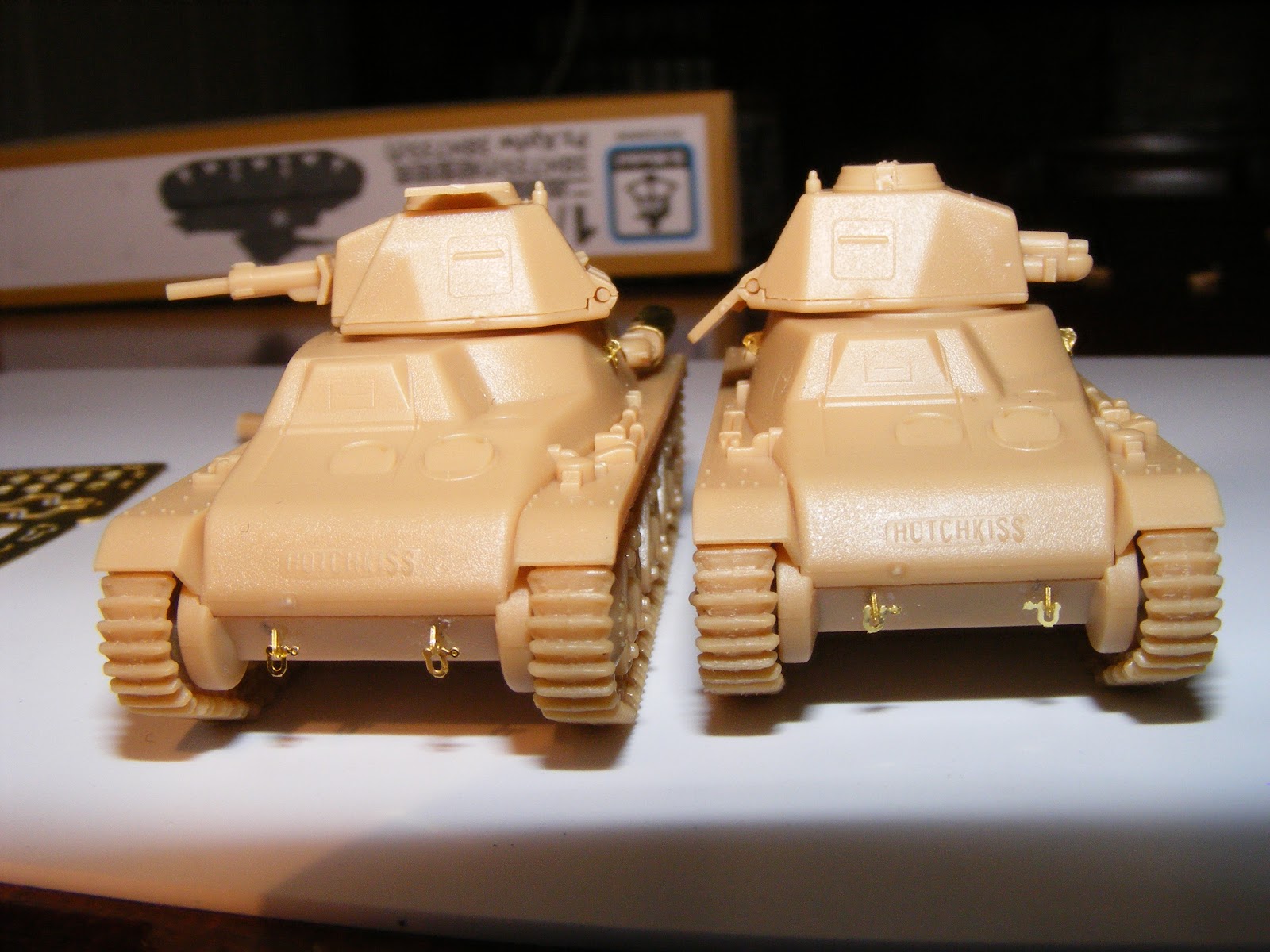 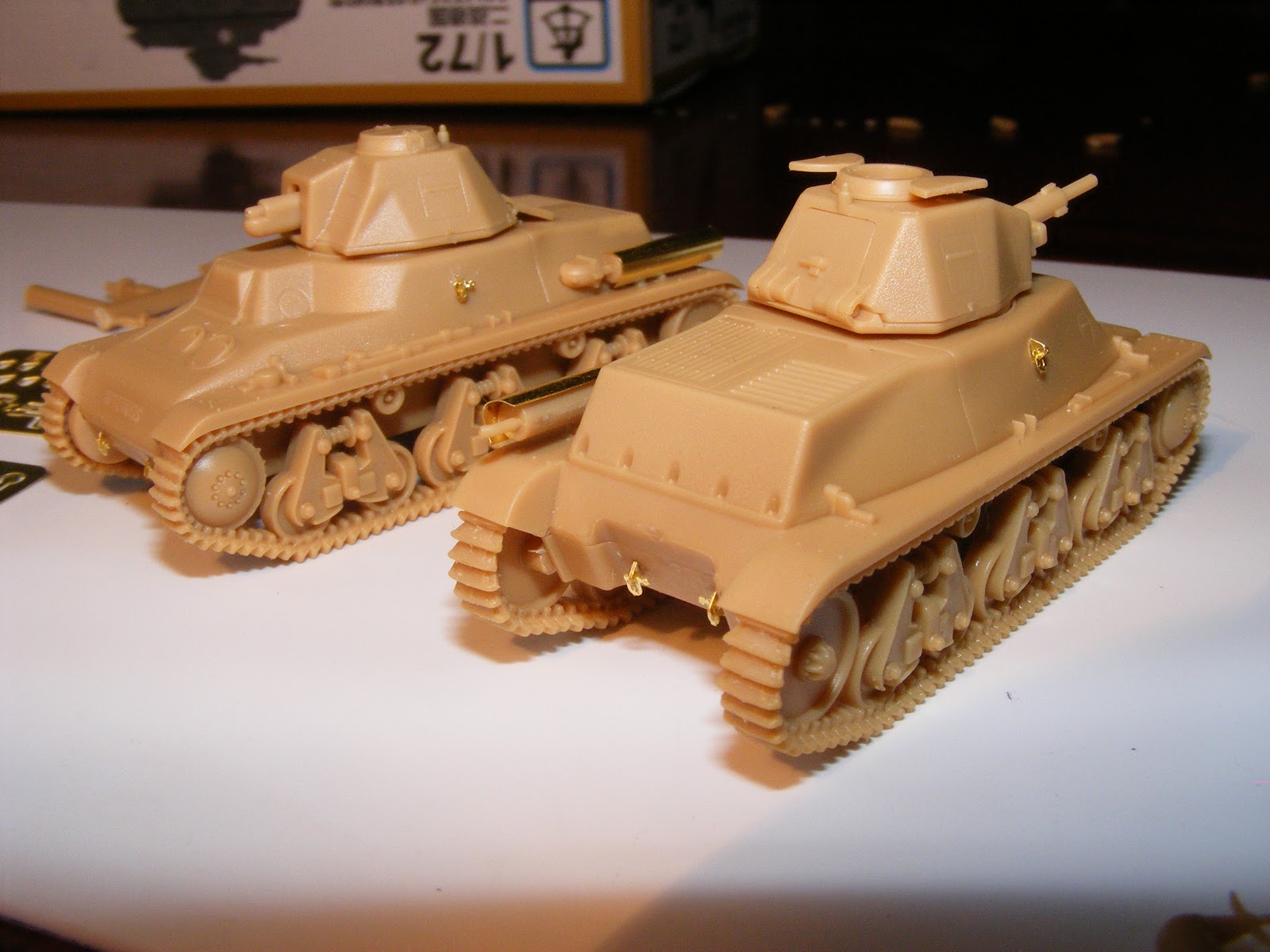 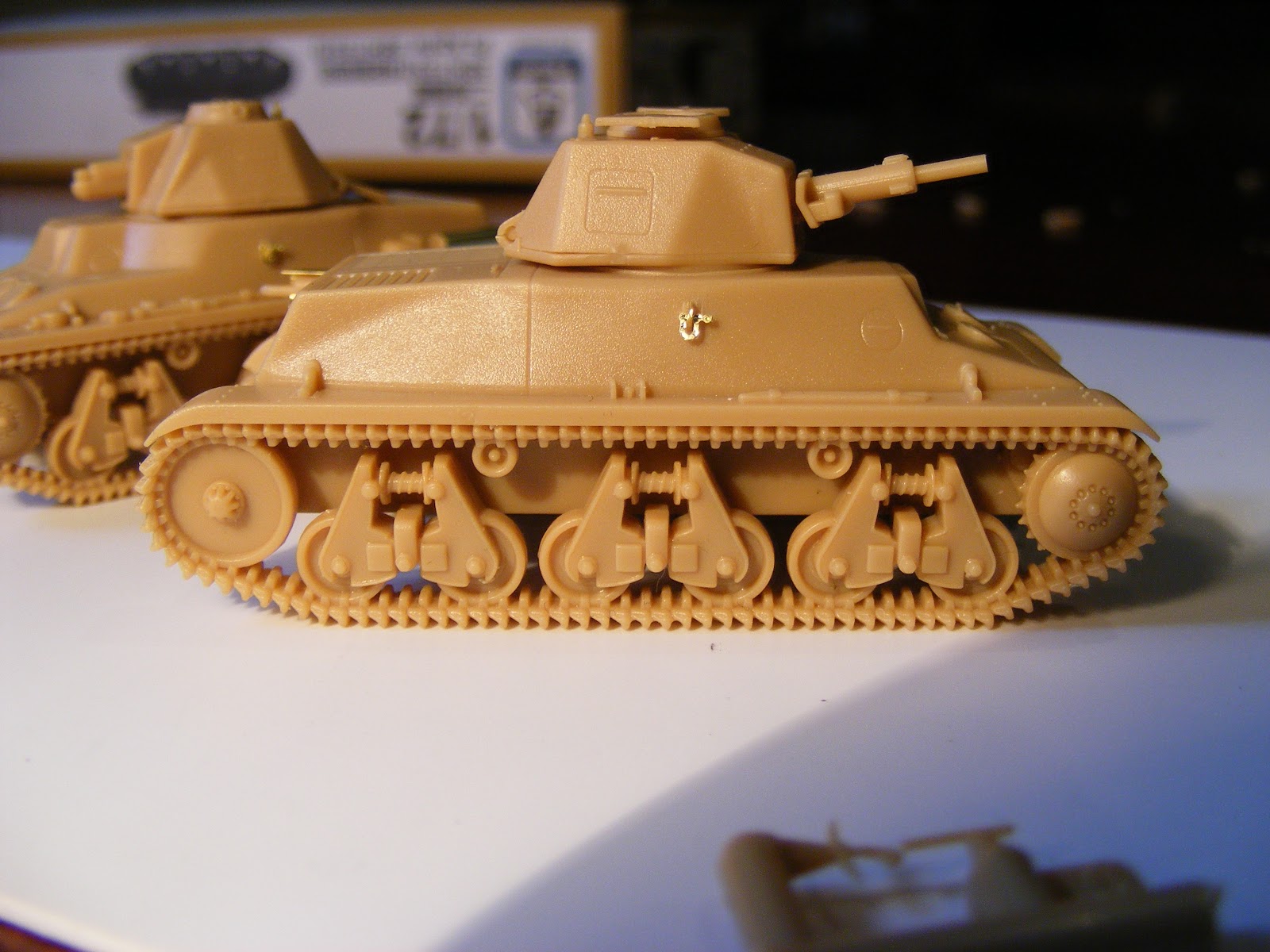 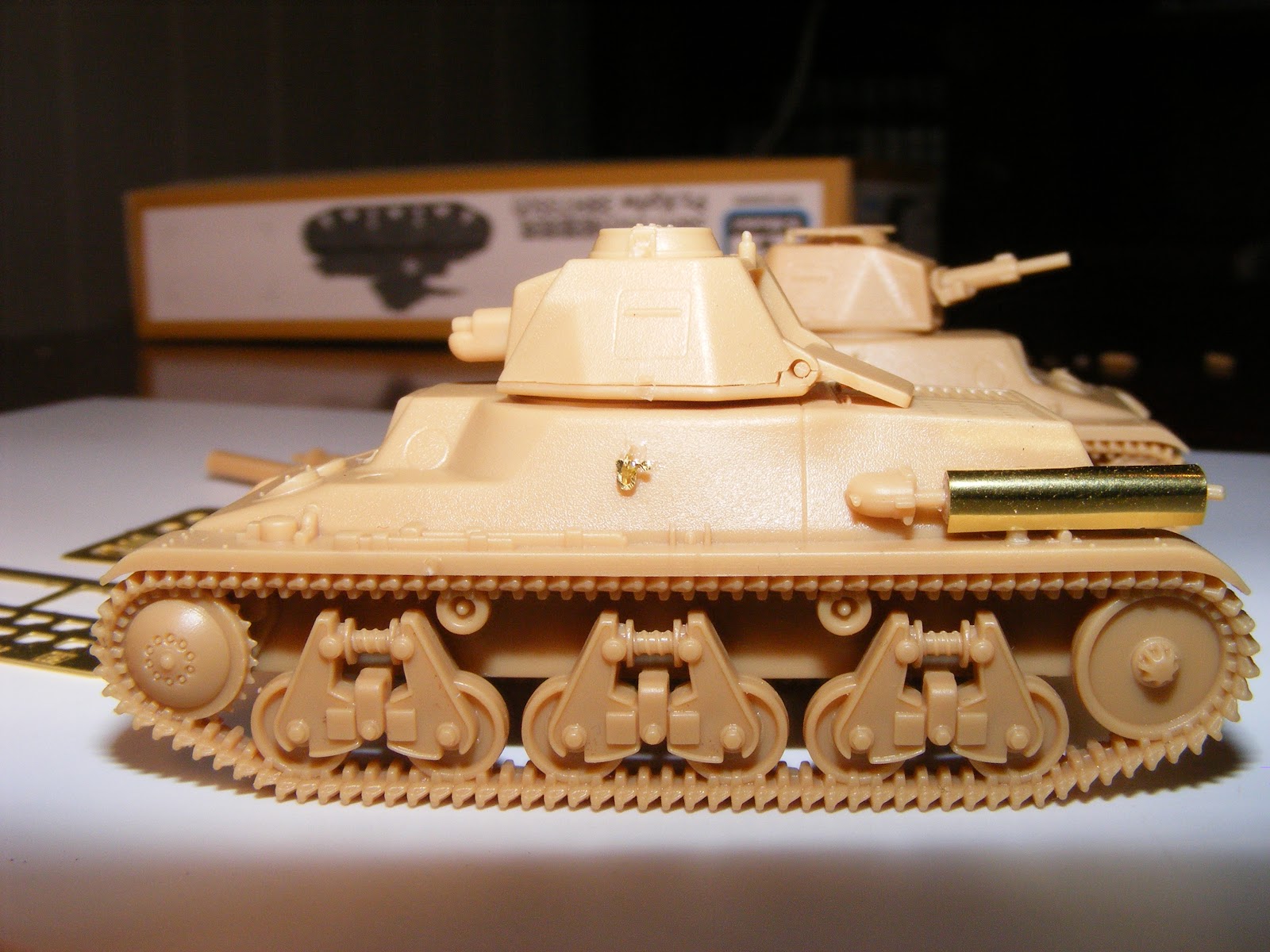 Below are tanks almost ready ready for paint. The tools and a few other parts won't be added until painting is finished as they will get in the way. 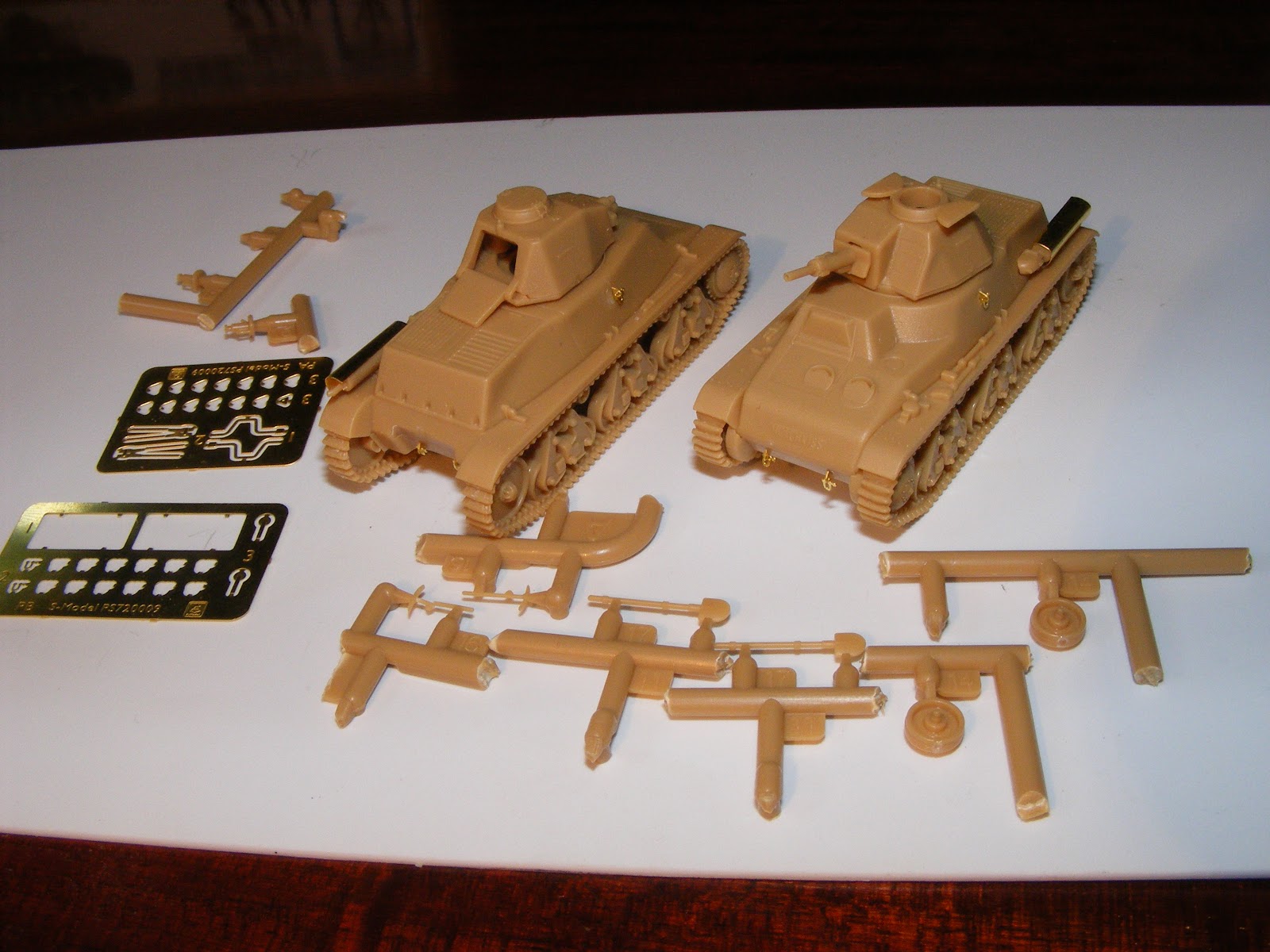 Below are the spare parts left over - open and closed german style cupola and hatches, french style cupola, and long and short 37mm guns. 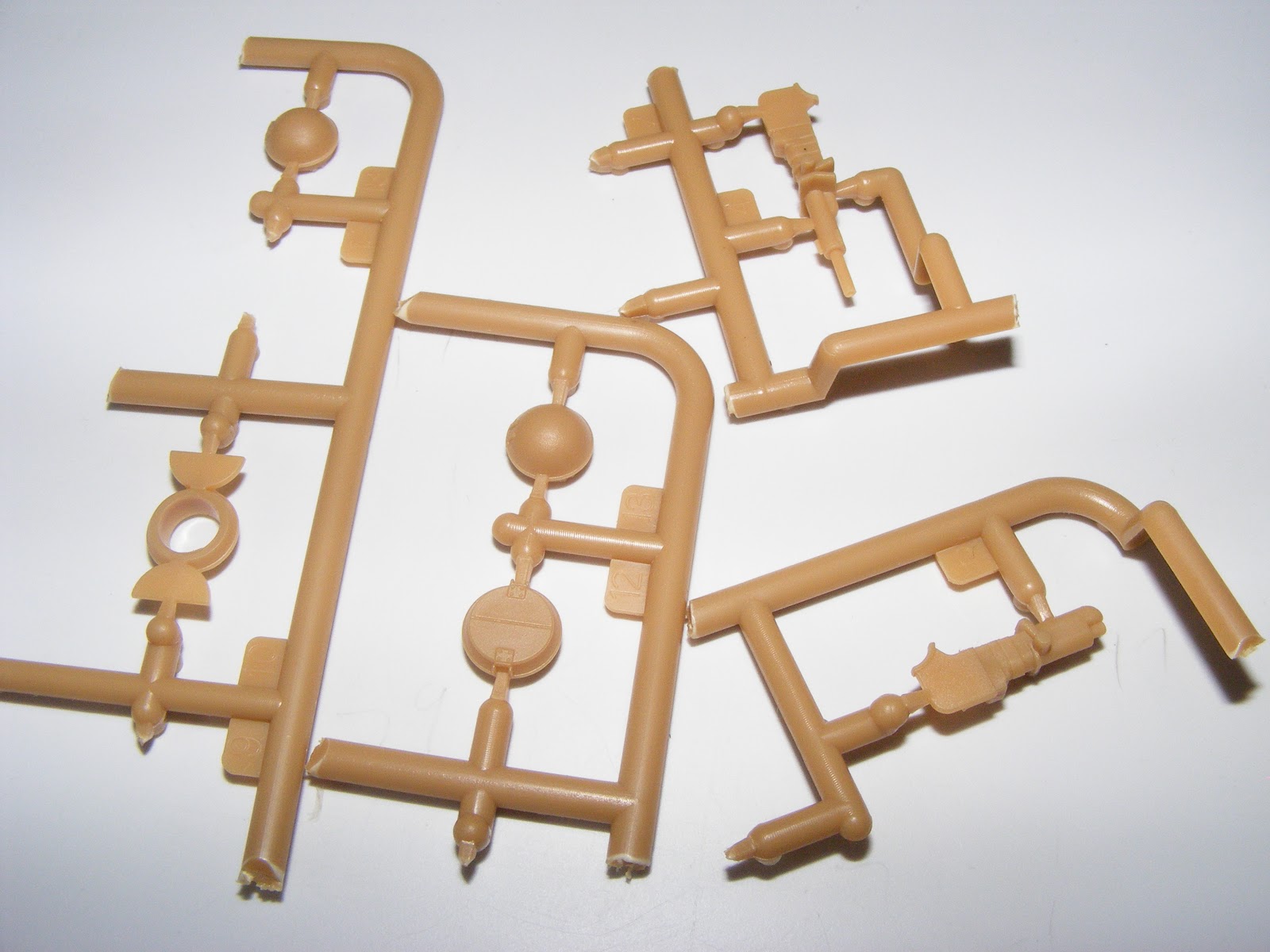 Next up I need to apply a tiny amount of filler around the turret join, and the front and rear hull join, before painting.

Update Sunday 03 February 2013. Both tanks were given a light pre shading with Tamiya Flat Black, and left to dry for a few hours. Each was the lightly sprayed with Humbrol Enamel Matt 94, heavier on the upper surfaces, to create some contrast in shading as occurs in natural sunlight. A few hours later a lighter shade, Humbrol Enamel Matt 148 was lightly applied to the upper sufraces over the Matt 94.

Next day I did a very light wash all over with watered down "Devlan Mud" which is a Citadel acrylic wash. This bought out some details as some detail is very lightly cast. Tracks were brush painted with a 00 brush with Vallejo Panzer Aces 'Track Primer" 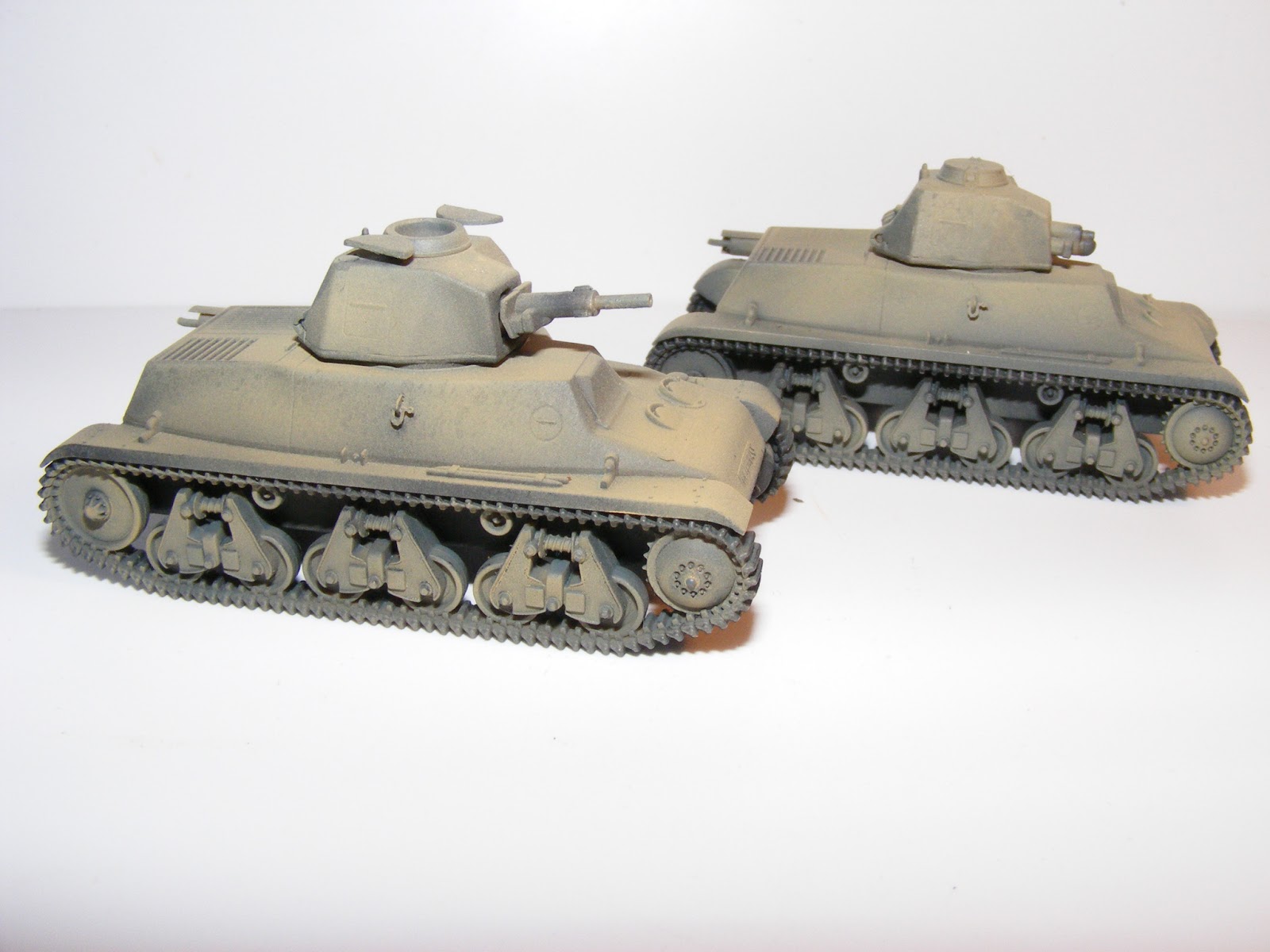 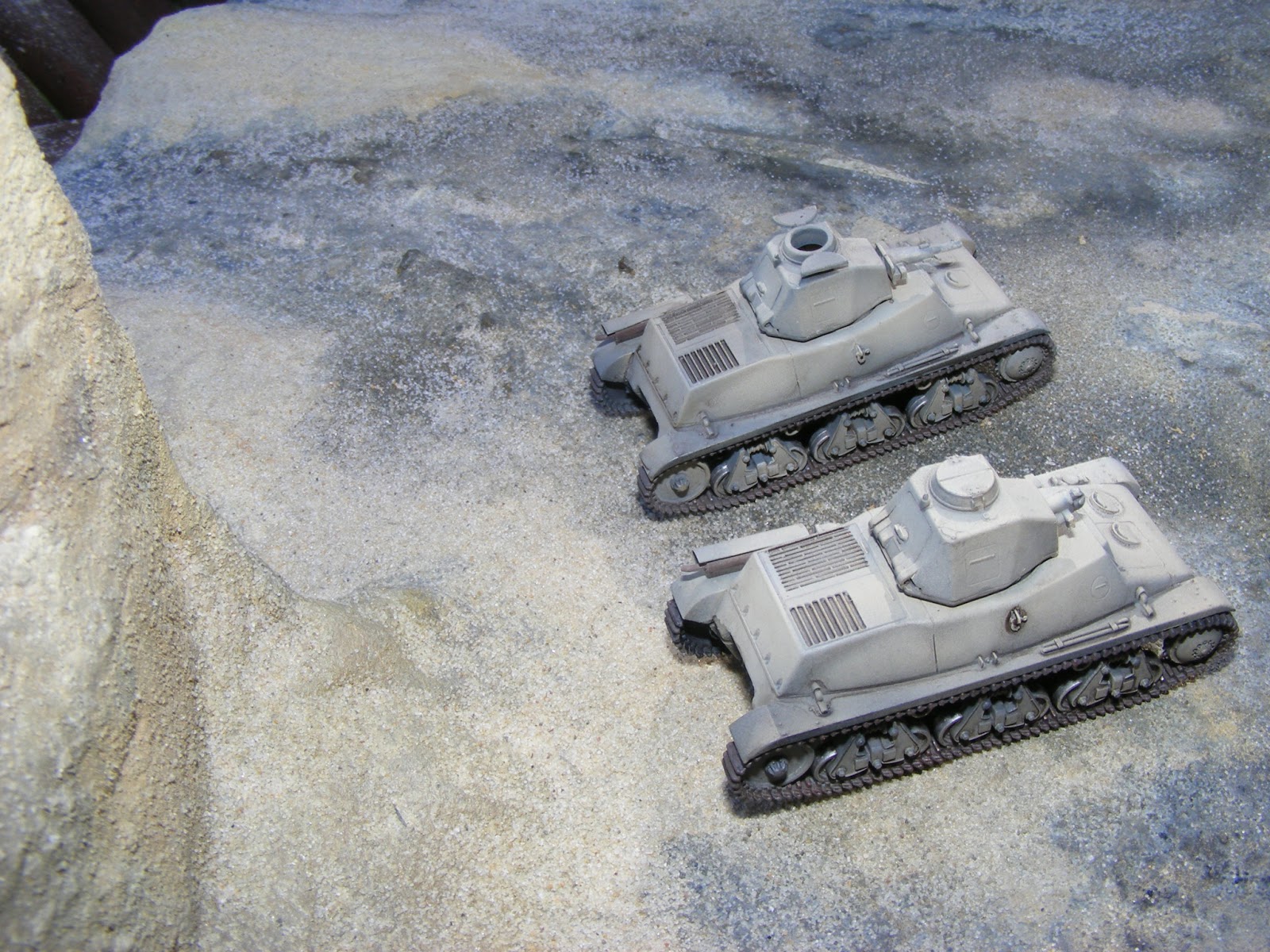 Update 20 February 2012. I have these close enough to completed. They could maybe use a little dust or muddy splashes but for now they are finished.

I added the jack and spare wheel but did not add the shovel, pick, crank handle or wire cutters. Period photos show these tanks frequently did not carry these tools when in german service.


Things to look out for

1) the join lines of upper and lower hull and upper and lower turret halves. These joins can't be seen with the Mark 1 Eyeball, but if you take macro photos you will notice the joins.

2) the tow hooks and U bolts at each end and on each side are etch - very tiny and very easy to lose. You need CA glue to affix these, and tweezers and a steady hand. A few spares are provided in the kit which as great, I used my spares, to replace ones lost while painting.

Final Comments. These are a great pair of tanks. 4 geramn cupolas (open and closed) and 2 french cupolas, 4 tank cannon, and a good range of numerals on the decal sheet. The hinged rear opening hatch on the turrets is another nice touch.

Two outdoor shots below were taken against the evening sky. 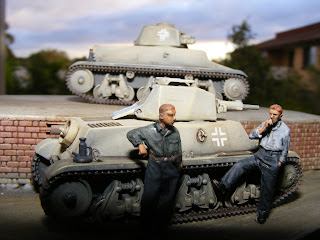 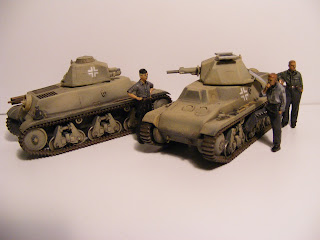 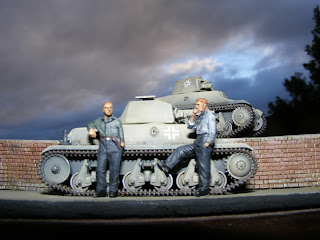 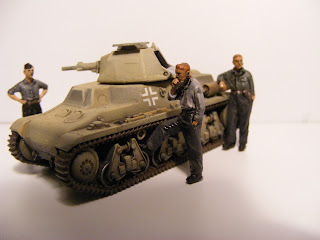 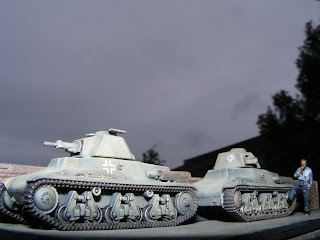 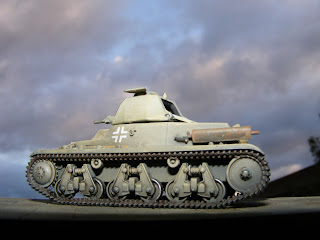 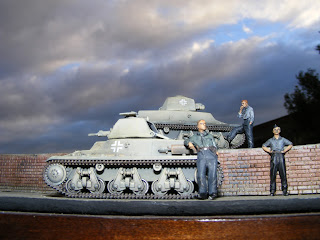 Posted by Neil Lyall at 4:03 AM No comments: