About this post. I have been working on this kit for a few weeks, but had not got around to starting a post for it, though I took many 'in progress' pictures to put in the post once it was started. However the SD card that the photos were on became corrupted and I cannot view or retrieve any of the pictures ! That will be a lesson to me about delaying starting a new post, so this build/review lacks the usual 'in progress' pictures.

About the subject. I won't discuss the history of "Karl" as that information is easy to obtain. There are plenty of reference books on the Karl, as well as numerous pictures on the web. Wikipedia has a short history of the 7 Karl's built. I will mention differences where it relates to the kit.

About the kit. Several sprues in this kit (see Henk of Holland site which has scans of the instructions which include the sprues). A set of 'rubber band' style tracks, a set of springs for the gun recoil as well as a small metal rod.  This kit allows any of Karls numbered 3 - 6 to be built. Karls numbered  1 - 2 had a visibly different road wheels, as well as having 8 wheels per side, Karl 3 - 6  has 11 roadwheels per side. Anyone wishing to build Karl 1 - 2 needs to buy Hobbyboss kit 28904 "Initial". Decal sheet in this kit for Karl number 3,4,5 & 6.

About the build. Almost all  parts are well cast and clean - very little flash or cast lines to remove, though a little of this work was needed on some parts. Almost all parts are engineered to be a good fit without need for filler or sanding. One exception were the parts that hold the gun to its carriage - parts F25 and F26. I found I had to sand and enlarge the circumference of these a little to get a good fit. The tracks are a good, if somewhat tight fit. I carefully gently stretched the tracks to add a few millimeters to allow track sag to be gained. Period photos show quite a bit of track sag. The tracks were joined with liquid CA glue, and this was brushed on the upper road wheels and toothpicks were wedged in place around them to ensure the tracks held their sag while the glue dried.  The kit provides parts for the long barrelled and short barrelled versions (known as 040 and 041). References advise that the barrels were interchangable, though it was a heavy workshops job to change from one type of barrel to the other. The short barrel was 600mm wide, the long barrel was 540mm wide. The long barrel fired a lighter round, but at higher velocity. The mesh grille next to the drivers compartment is not very well cast, the mesh being too thick. I improved it but it would be better replaced with mesh. The metal springs are hidden inside the gun casement. Karls spent most of the war in their barracks in Germany, only being sent out for specific operations on a few occasions during the war. For this reason I have chosen to paint this one in a fairly neat and clean appearance.

Overall impression. A good kit, this opinion based on little clean up of parts needed, almost everything fit well, clear instructions how to assemble. Would have been nice to get one each of the rounds for the 040 and 041 barrels, to sit on the rear loading cradle. This kit does not need advanced skills to get a good result, and period photos show a variety of paint schemes can be chosen. 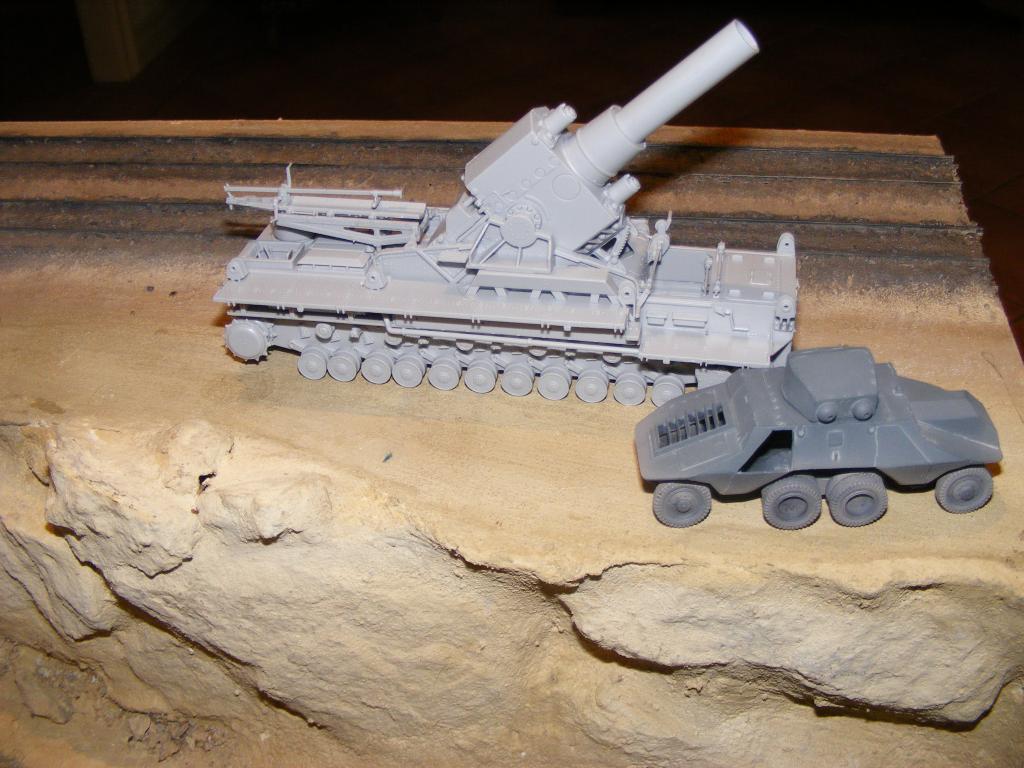 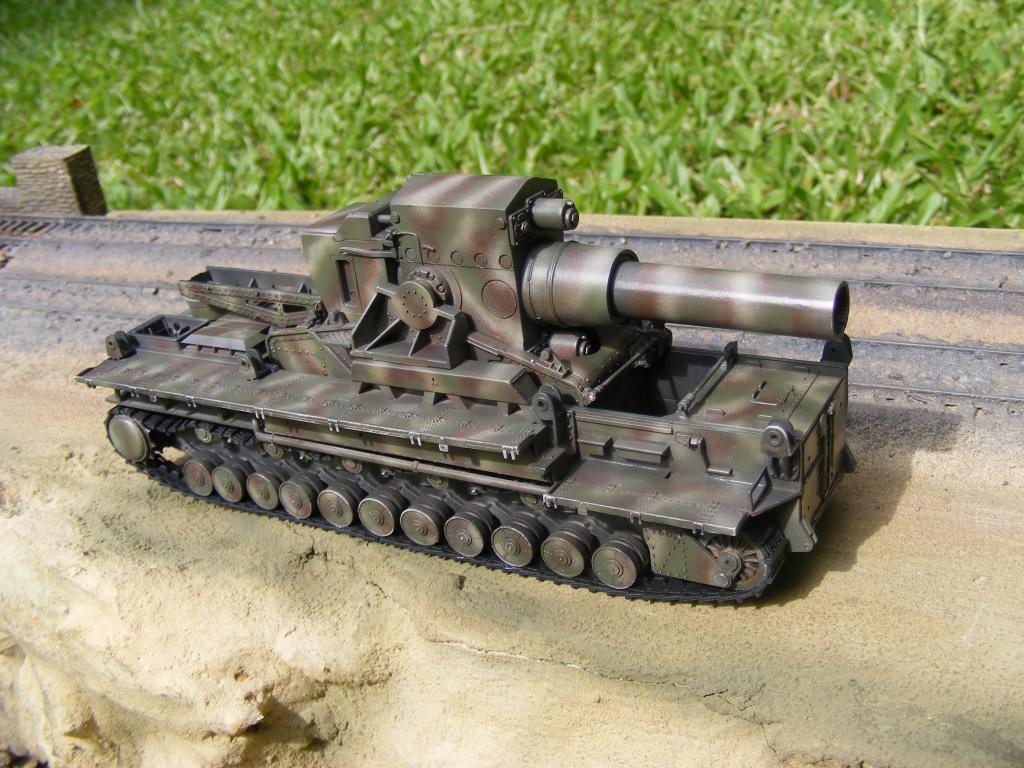 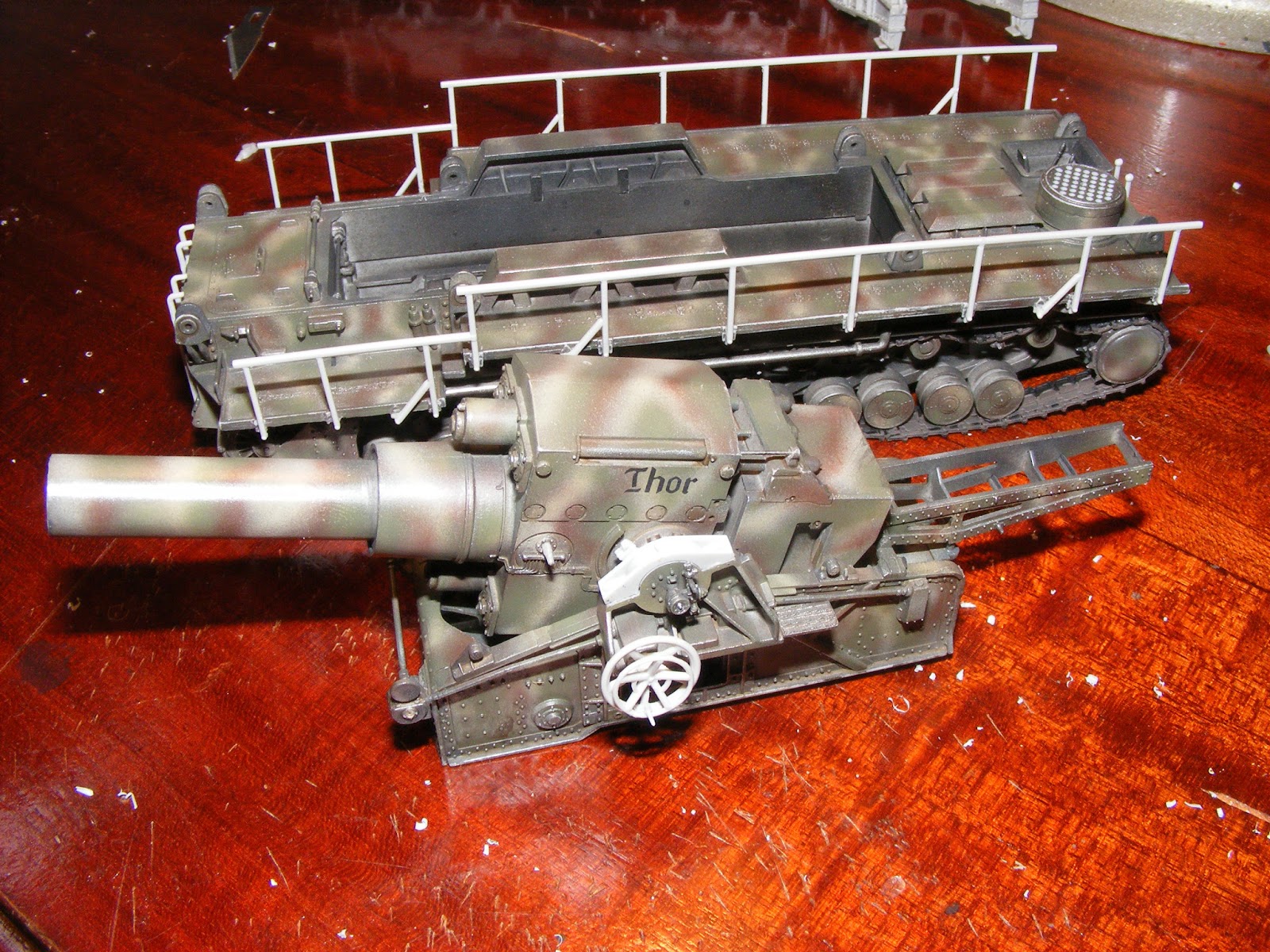 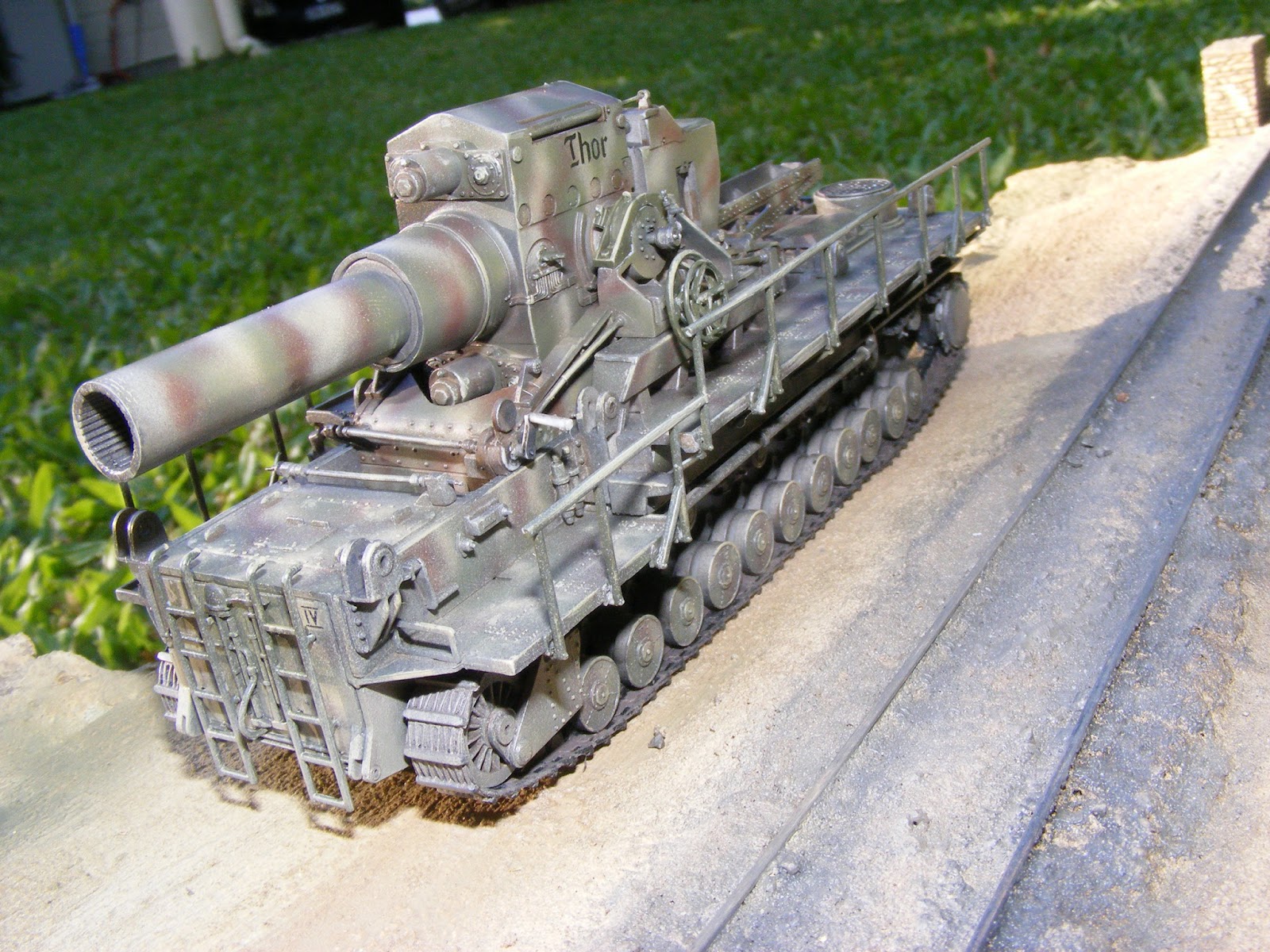 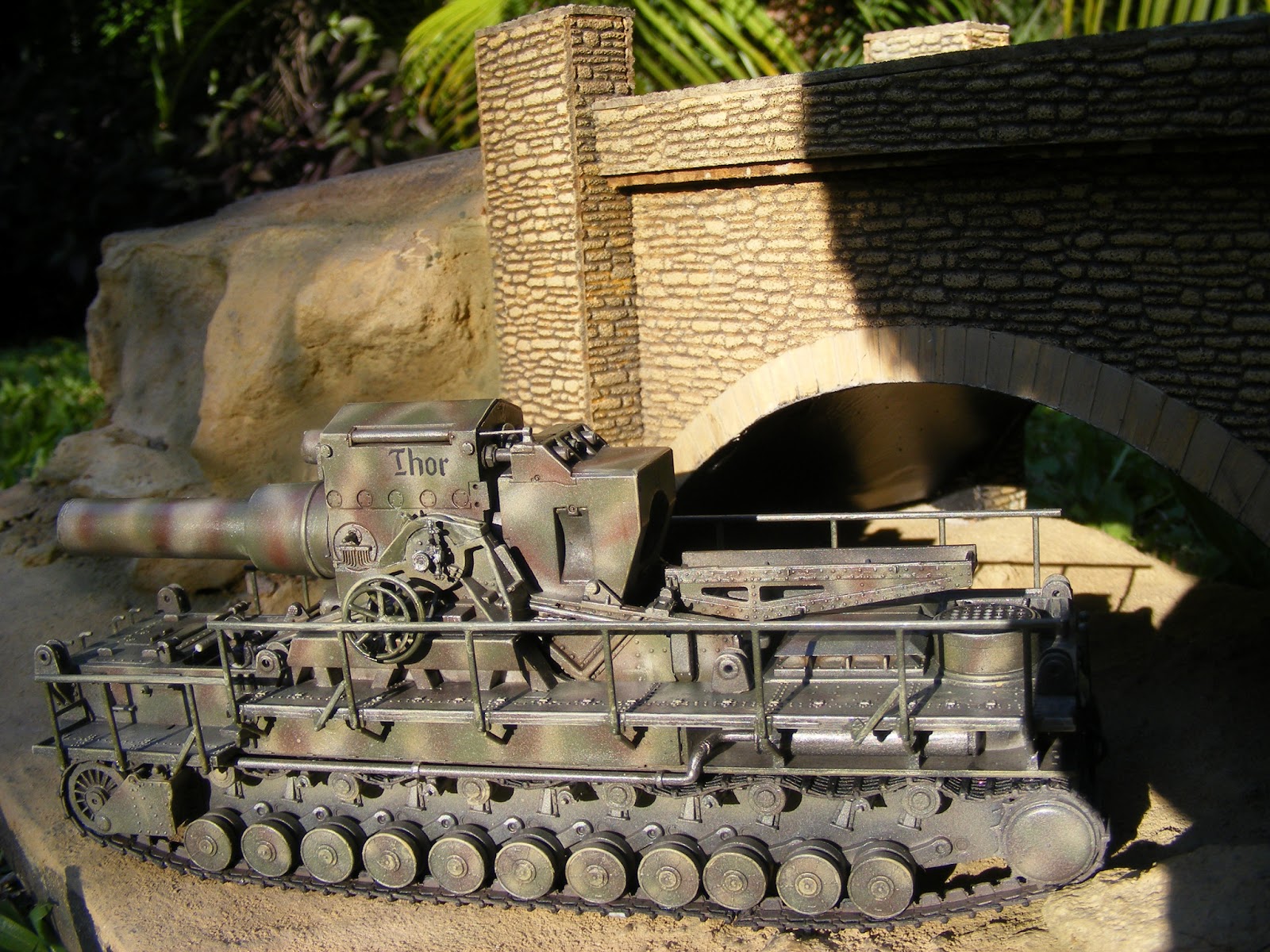 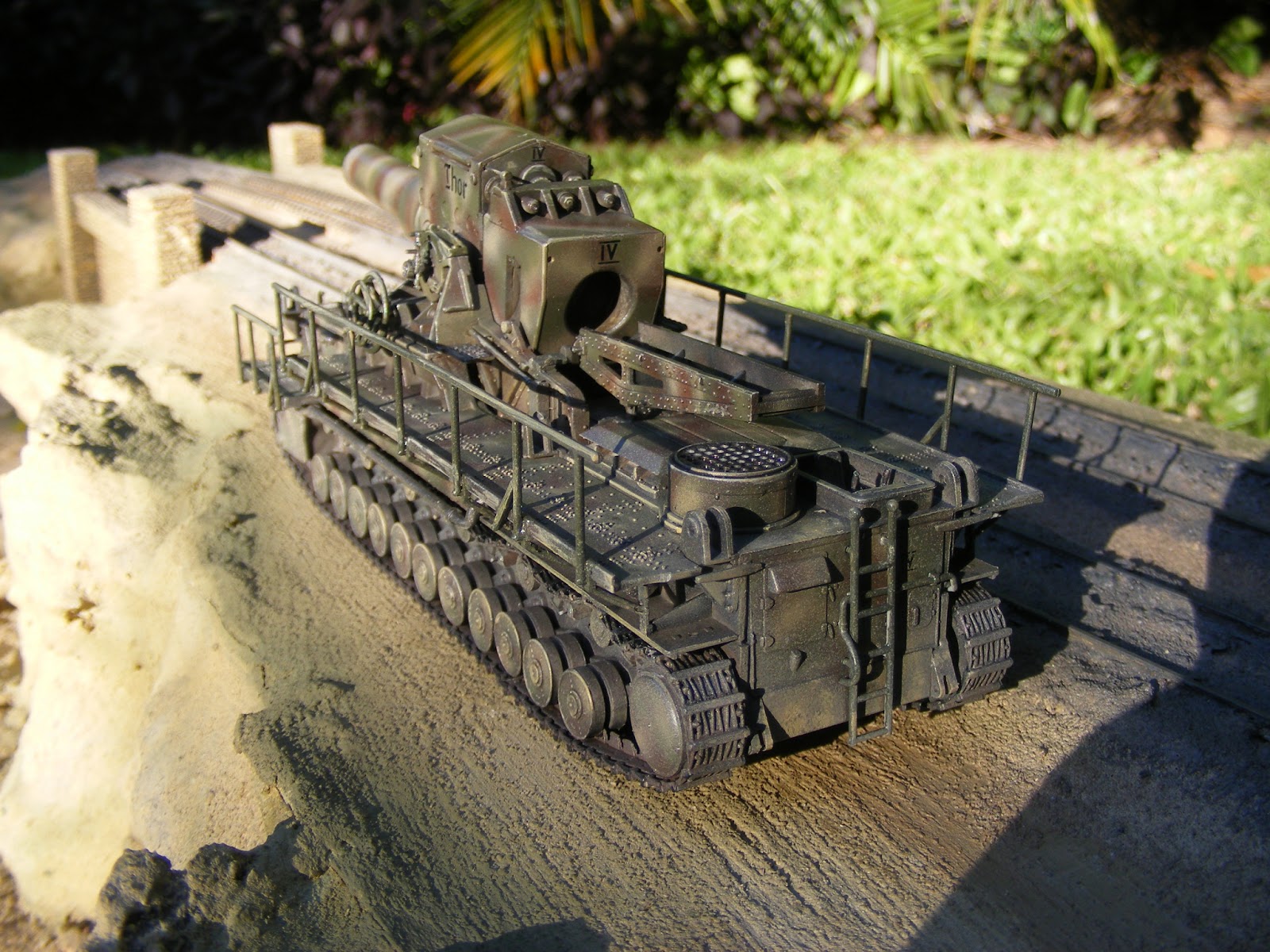