This is another kit I bought soon after it was released, with the intention to build it promptly, but some years have passed, with the box gathering no attention, only a light coat of dust. I decided a week ago it was time to get this bizarre looking vehicle built.

Brief History. 14 ADGZ were inherited from the Austrian army and another 25 were produced in 1942. The Encylopaedia of German Tanks labels this vehicle as a "Polizei-Panzerkampfwagen ADGZ".

These vehicles were very lightly armed and not suitable for front line use. From 1942 these vehicles were used to fight partisans in eastern europe, particularly in the Balkans.
Despite the relatively low production numbers of these vehicles, quite a lot of period photos exist. Photos indicate these were in use in dark grey and dark yellow paint schemes, as well as winter whitewash in snow season.

In  the box. 4 sprues of parts, one set of instructions, one small sheet of decals. 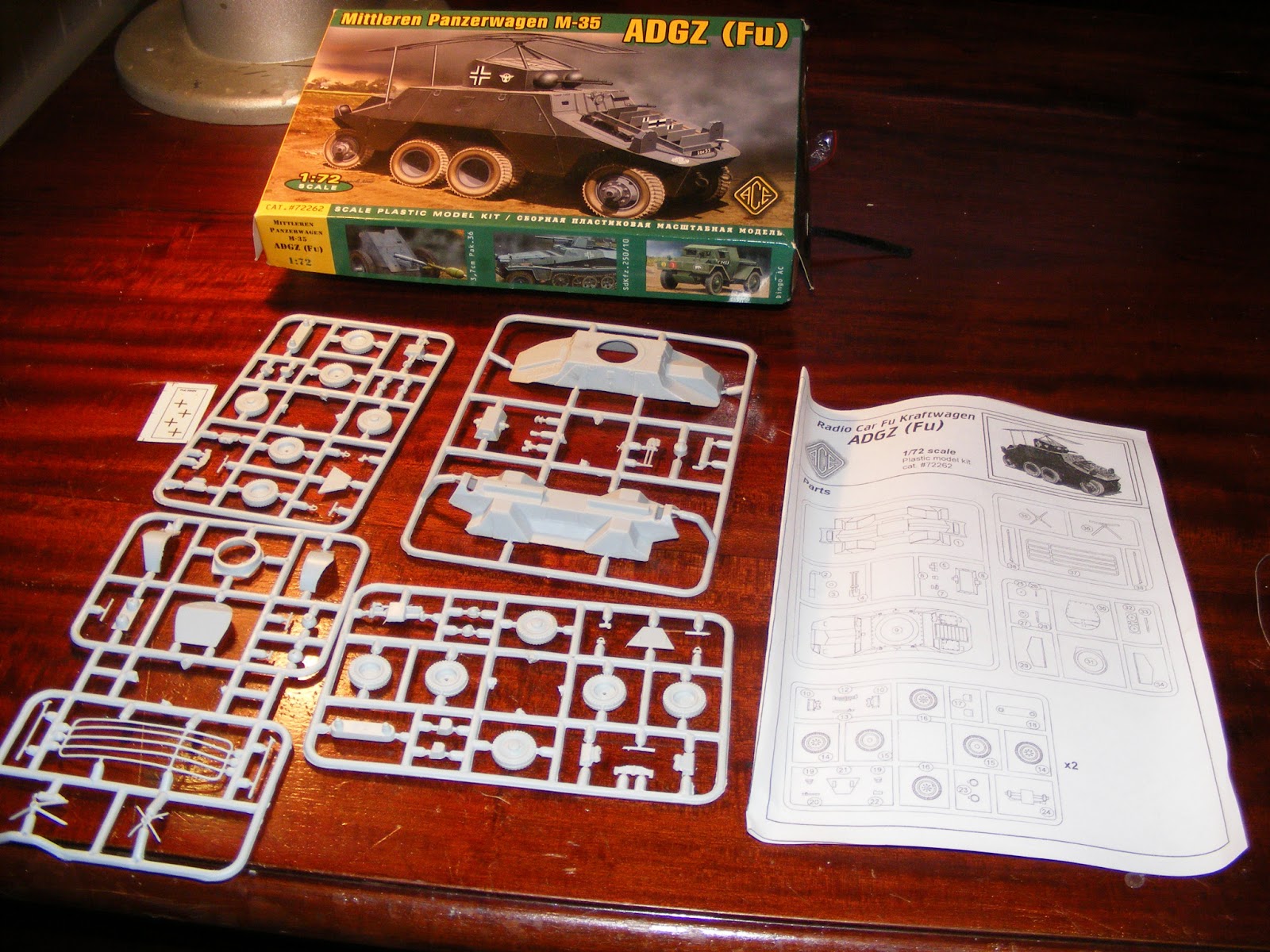 There was a fair amount of clean up of parts, as occurs with short run kits. Most parts had cast lines, and the suspension/axle areas needed the most work.

Having read a review I expected the worst with the joining of the upper and lower hull, and with irregular axle level between the front and rear end wheels and the middle sets of wheels.  I found the wheel sets sat evenly when I test fit the wheels, perhaps over zealous clean up of axle areas can create uneven axle heights, in any event, happily I did not experience this problem. So onto joining the upper and lower hulls.

I also decided to clean up the join along the top and bottom halves of the hull after joining them, rather than before, so as not to damage the angled joint, which would be hard to fill and sand back to the correct angle. Again I did not experience the problems I read in a  review, the join was fine, just a tiny irregularity on one side had to be cut off along the join line to get a good tight fit, provided pressure was applied. I applied liquid cement and kept  heavy pressure on the two halves for some time to get a good tight bond, having done that there was just a little flash to sand around the join and no filler needed. Most pleased with that easy win.

The four parts to the turret needed a small amount of filler on the rear join and a tiny amount on the top on one side. The front panel of the turret had a lot of scraping and sanding to get a neat fit. 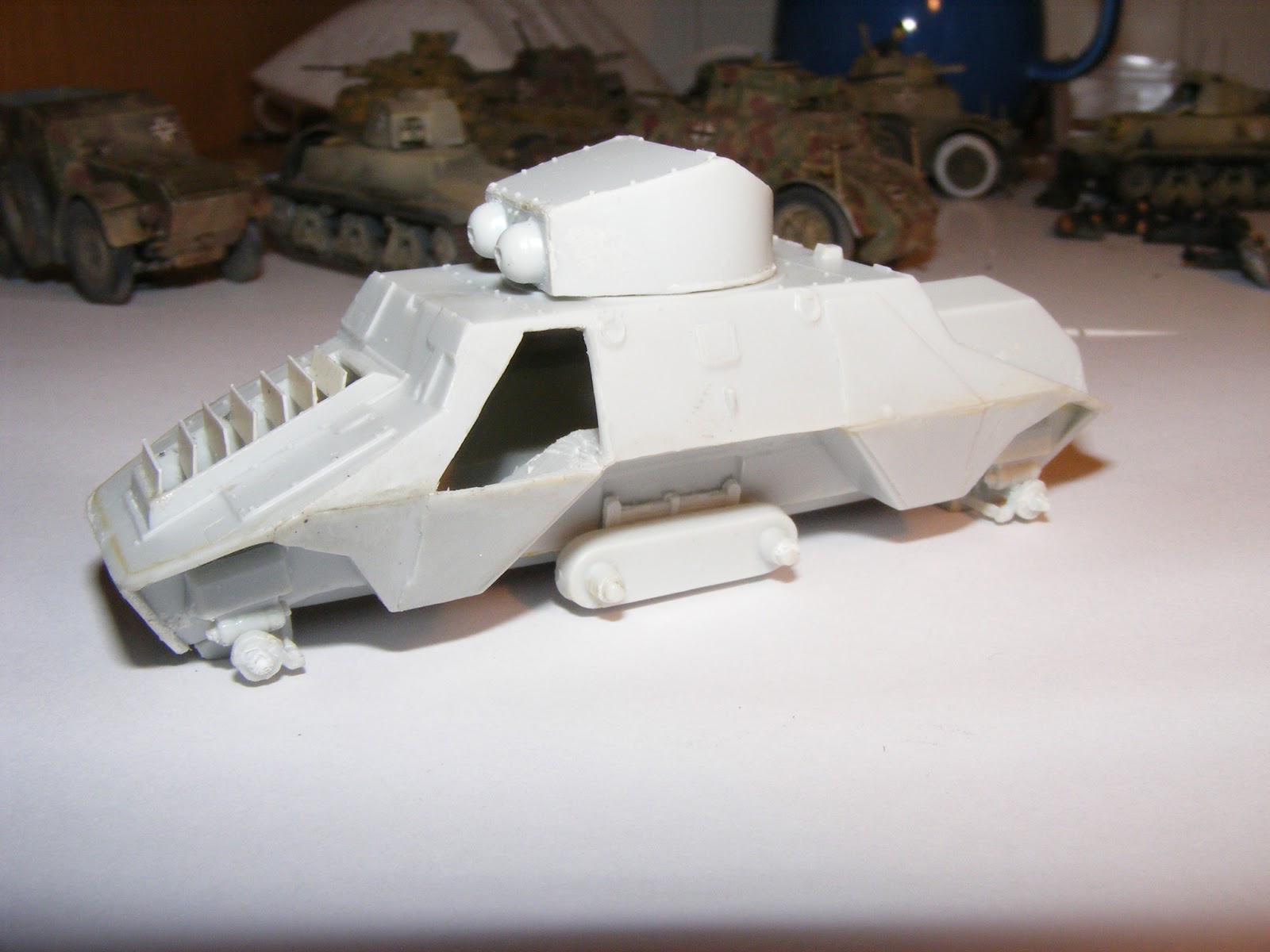 Then the start of a paint job, prior to fixing small details such as lights, as I find these get in the way when painting and small details are easily broken in the handling on the way to final assembly, so I usually add these last, and no change to that strategy with this build. 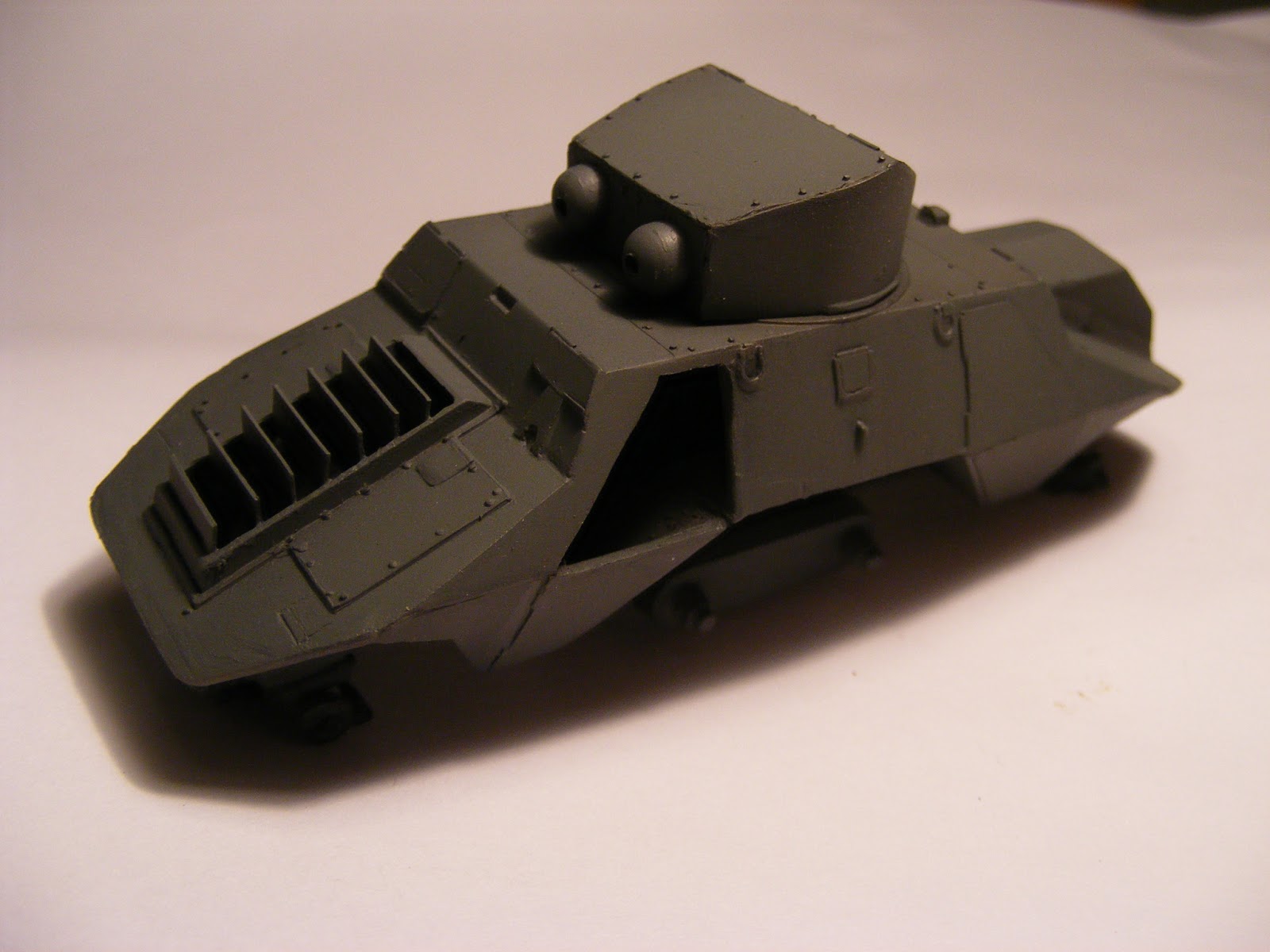 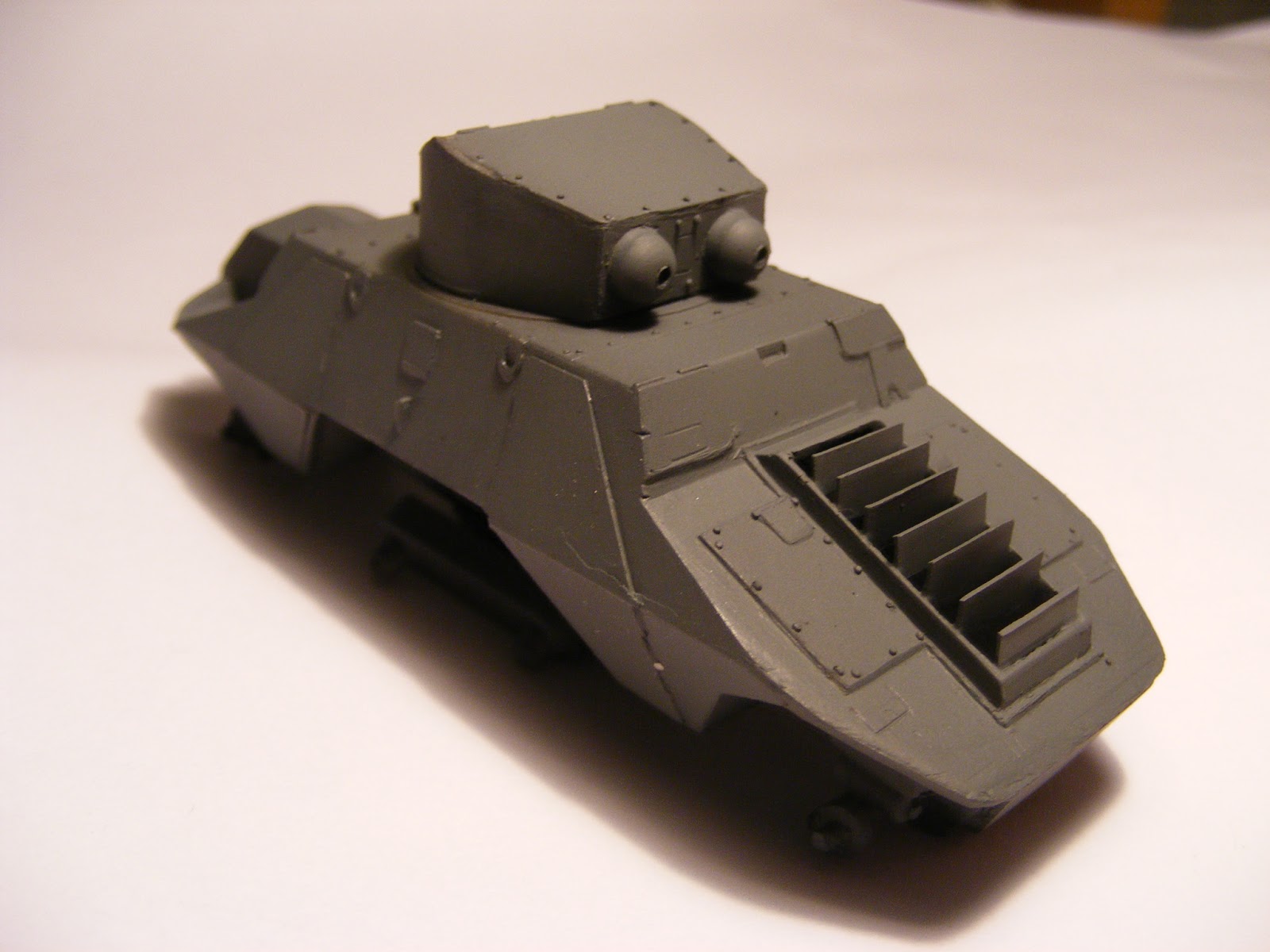 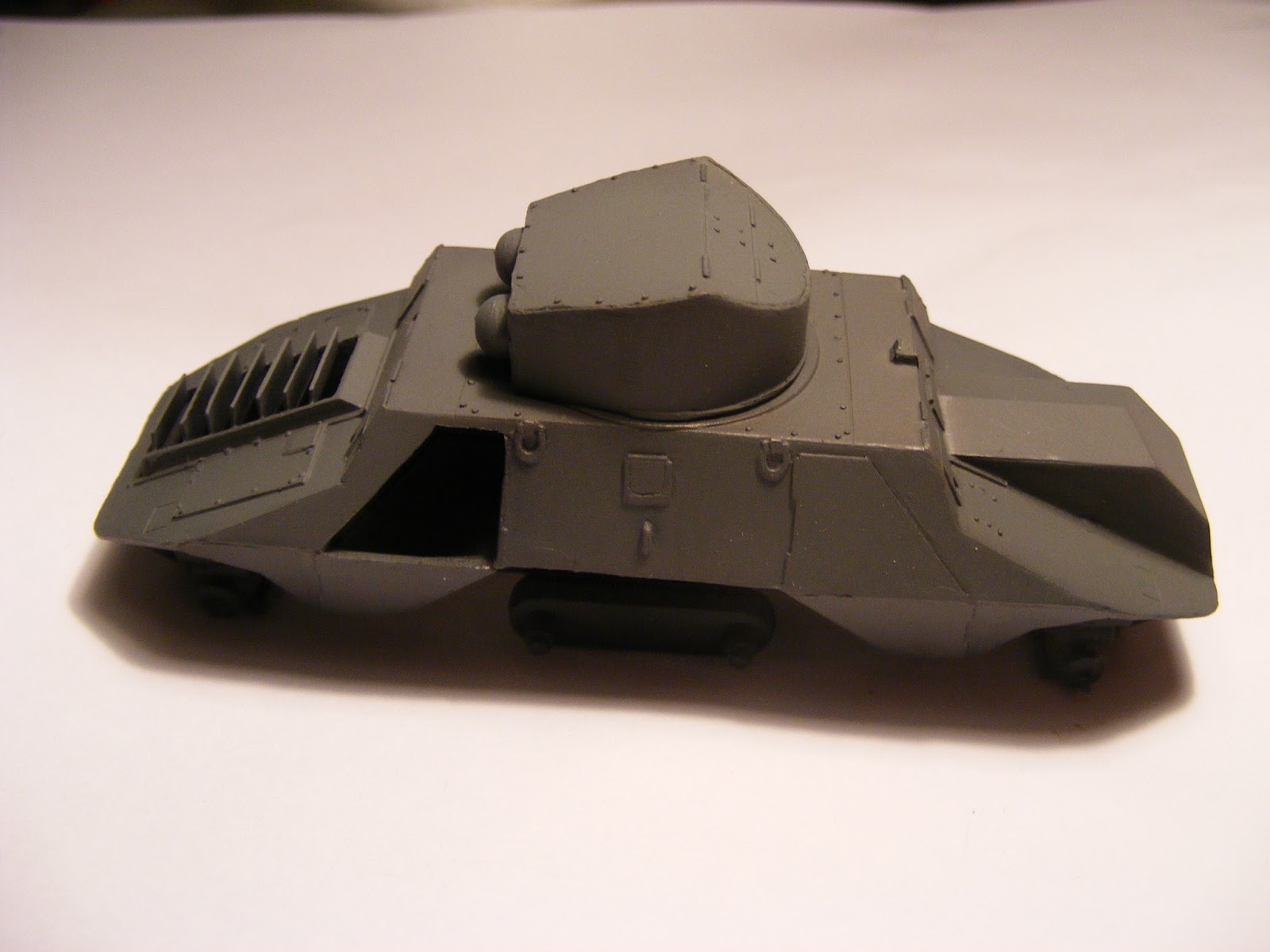 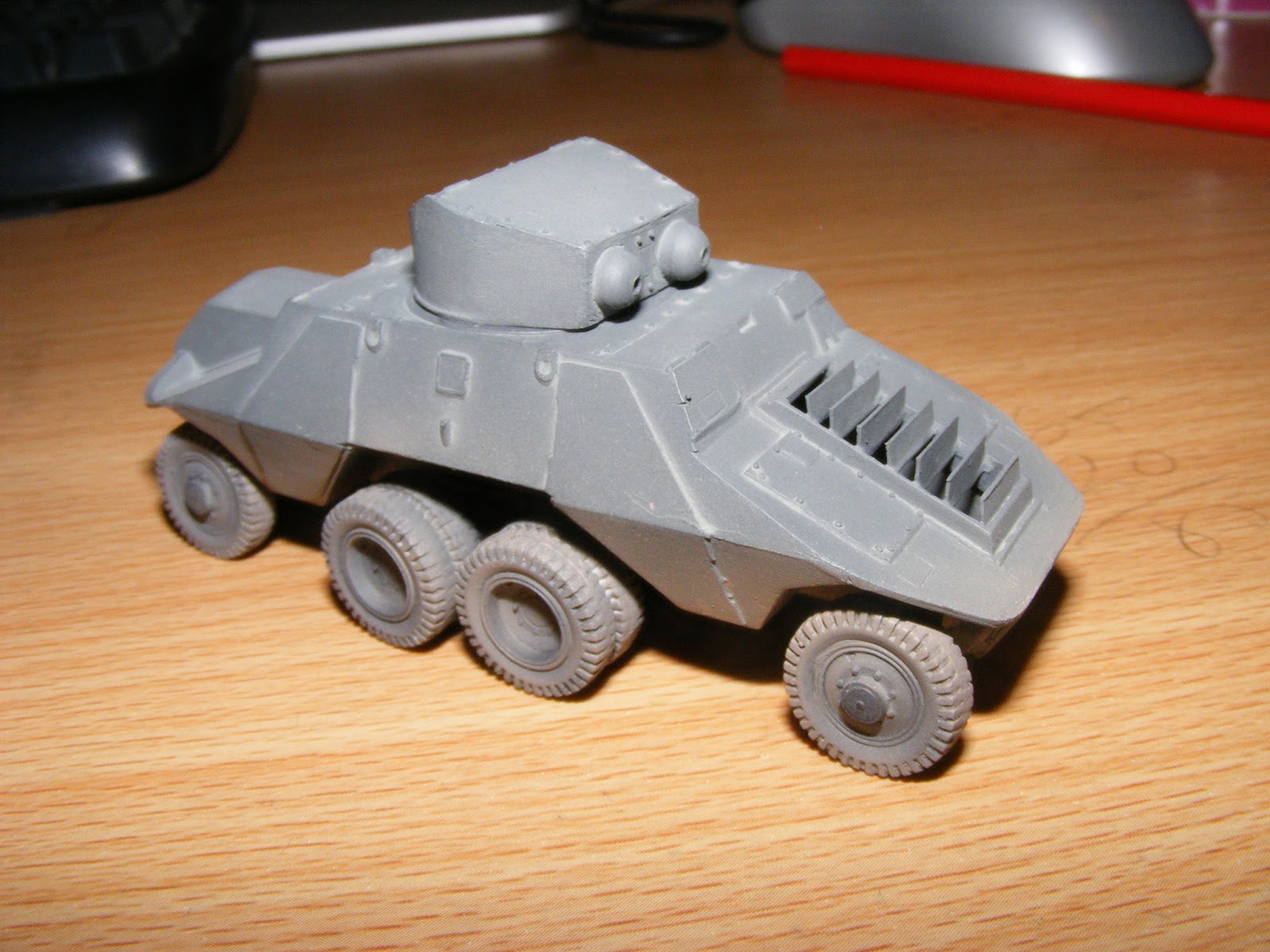 Update Sunday 28 April 2013
This one is now very close to complete. I have left some small parts off, which may be added later, these being the two shovels, number plates and turn indicators. At this stage I also have not added the 'bedframe' aerial. The aerial is quite well cast, so would take little time to attach it. Door handles added from bent pieces of copper wire, open door made from plastic card, cut to shape. 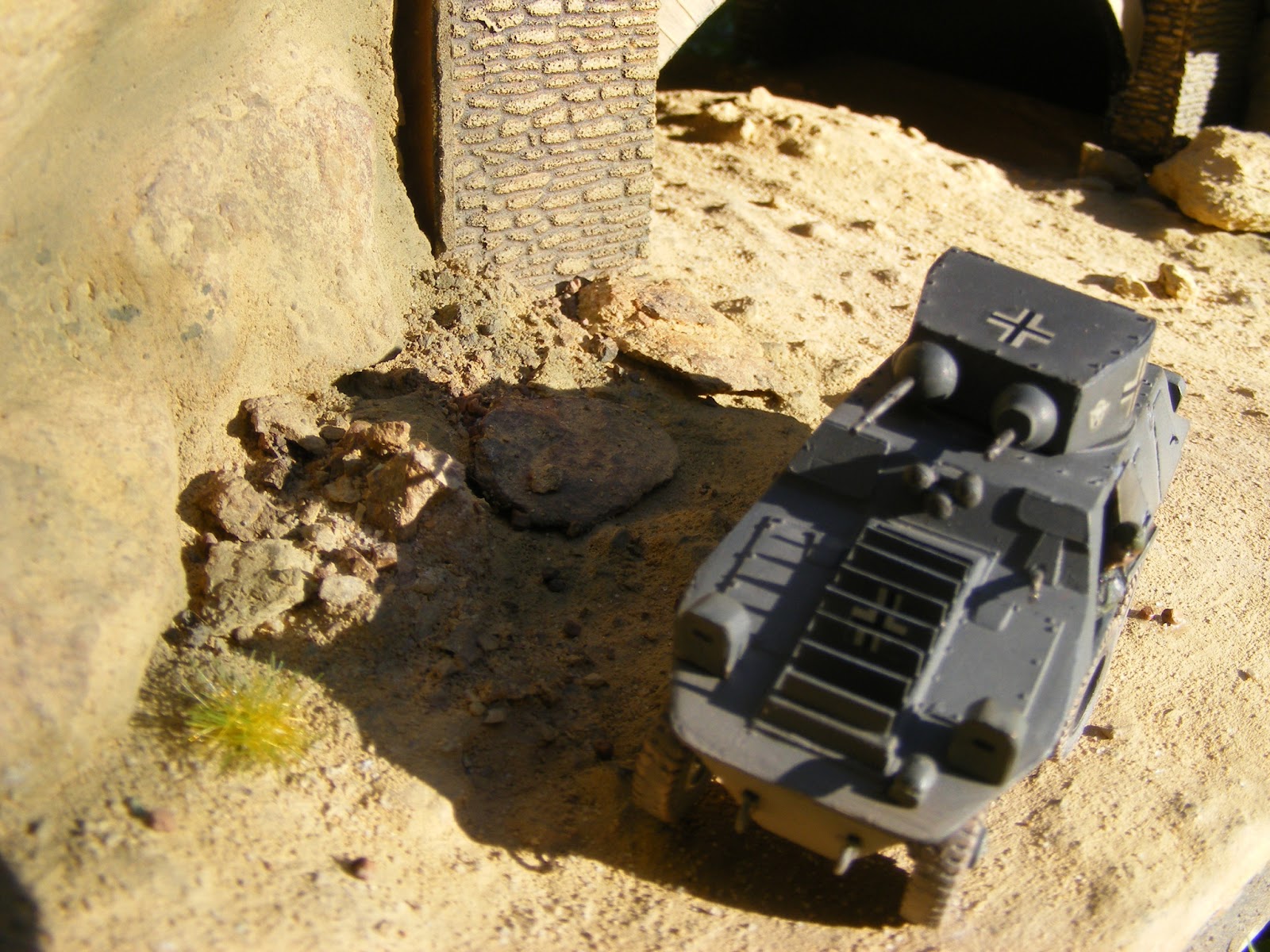 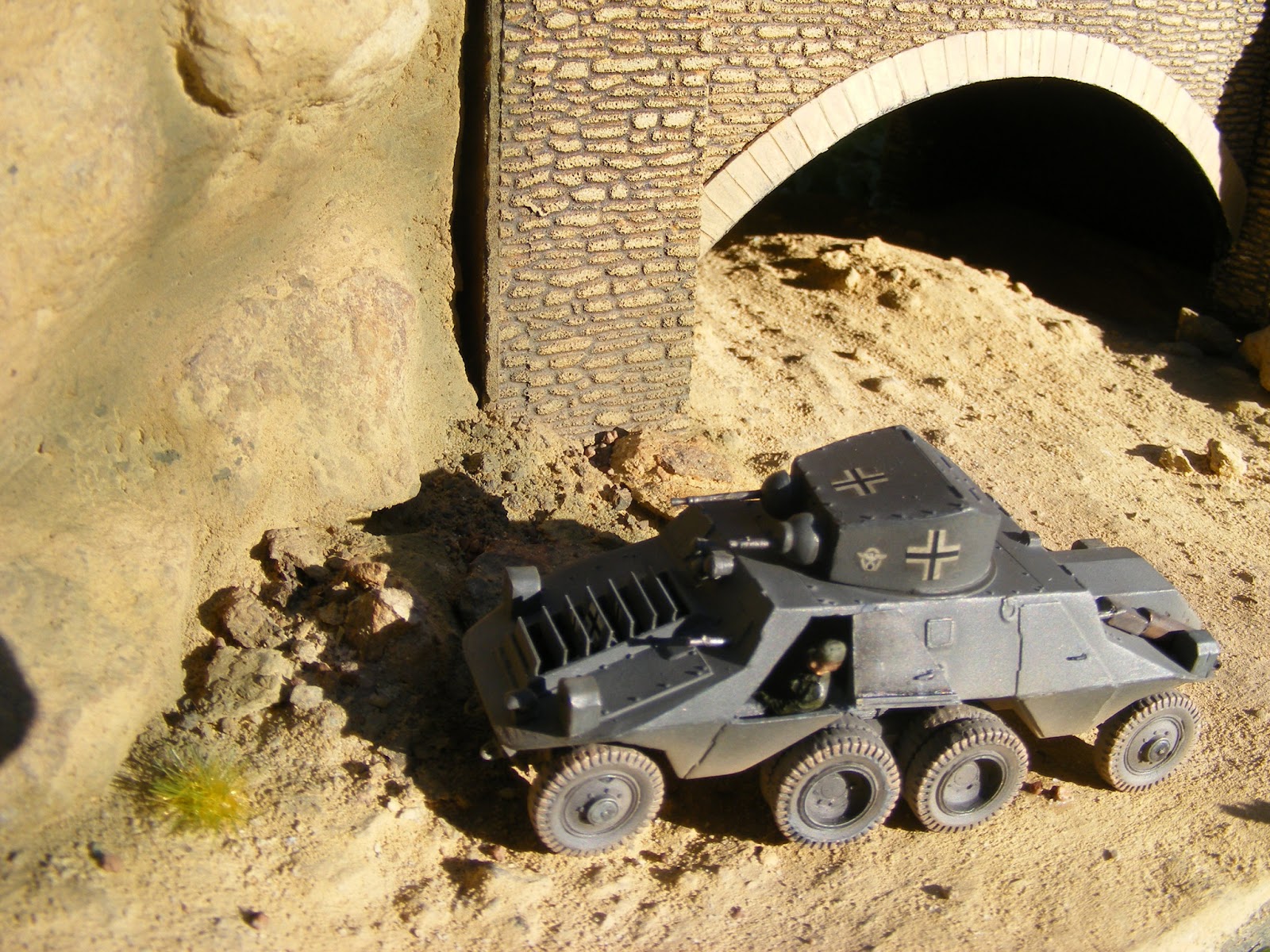 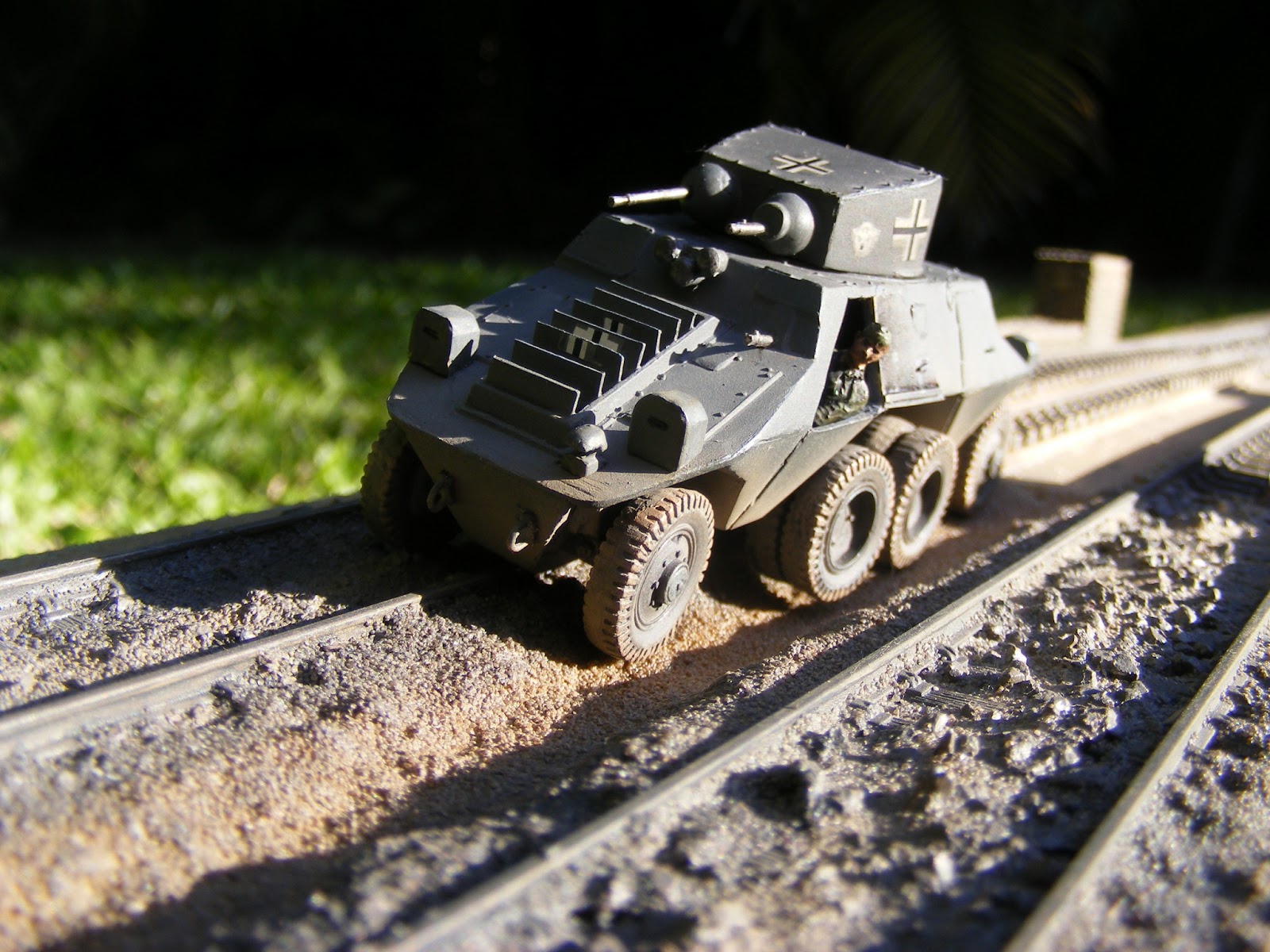 Update Sunday 05 May 2013. I decided to lighten the paint job. Period photos show these vehicles in what looks to be dark yellow, as well as dark grey, also winter white wash. I used Hobby Color acrylic H79 dark yellow, lightened with a little white.Still need to tweak the finish a bit but here is the progress so far. 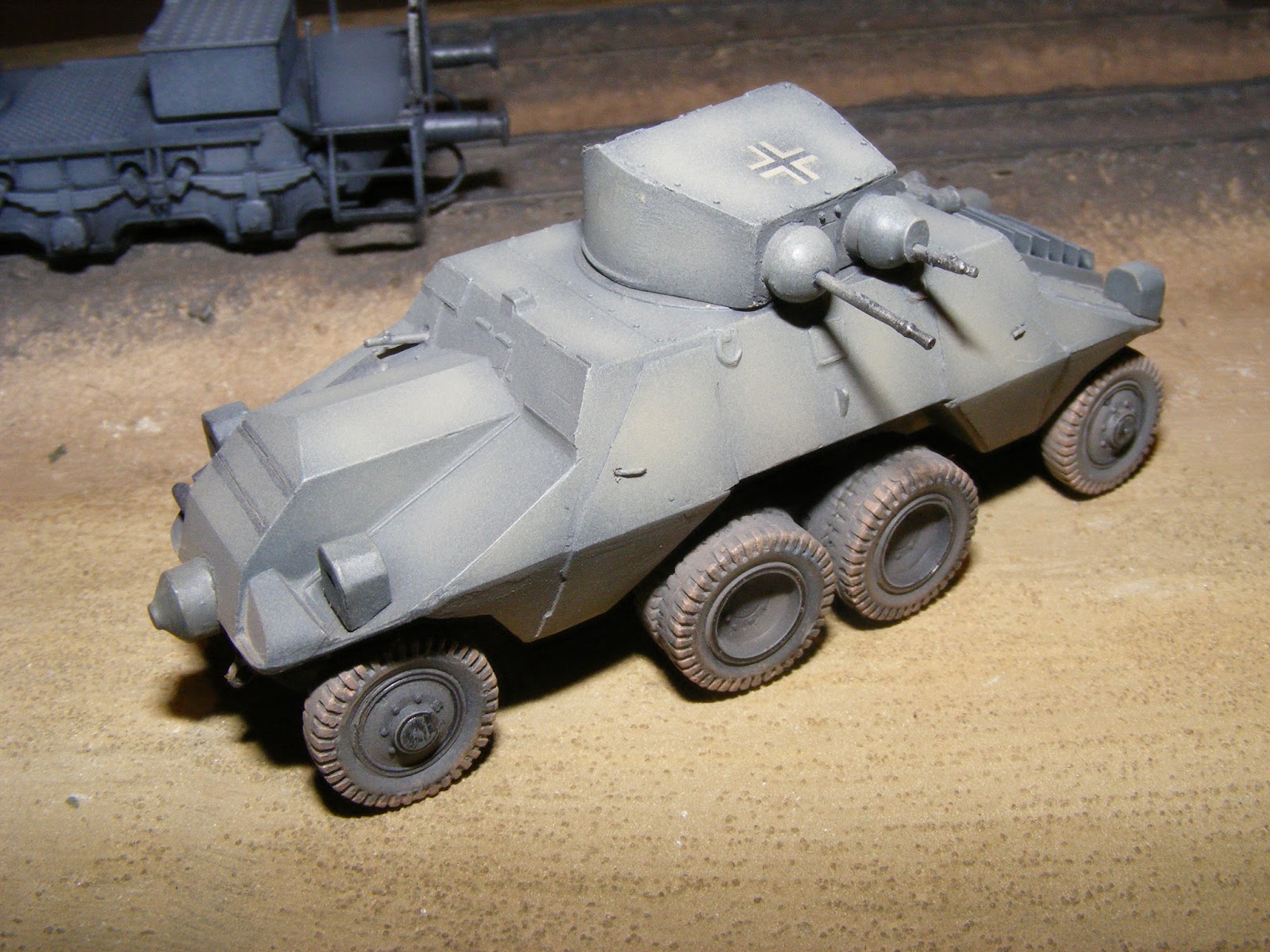 Posted by Neil Lyall at 4:39 AM No comments: