Comments on Construction. No issues  with the build, all quite straightforward and easy. Parts specific to this captured version are a german Panzer III cupola on the turret roof and a rack for extra ammunition on the rear of the hull. Also a rack and set of jerry cans. Some detail has been simplified.

Other comments. The foot rungs are cast as solid tabs on the turret - I cut these off and replaced them with bent wire, drilling tiny holes with a micro drill bit to affix them. I also made what appear to be 'track hangers' on the turret sides by bending wire, and affixing the same way as the rungs, as photos show these were added to the turret sides. Also in the period pictures, lengths of tow cable are wound around these hangers.I used the rubber tow cables that come in the kit, looping them around the hangers. The tracks are a single length of rubber. To make them a little longer to obtain some realistic looking track sag, you can gently stretch the segments at intervals. I grasp the track with both thumbs and forefingers, side by side and gently pull about a millimetre or so until I feel the track give a little. The key here is to be very gentle, or you will stretch the track out of shape or worse, tear it. With gentle pressure at regular intervals along its length, you can add a few millimetres to the length without changing its appearance. Slit view ports were made on each side of the turret with a micro screw driver blade, sharpened with a file, to make a neat rectangular hole. 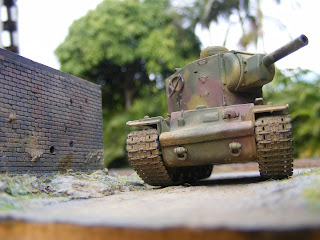 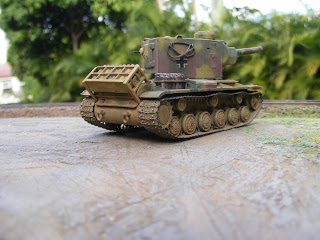 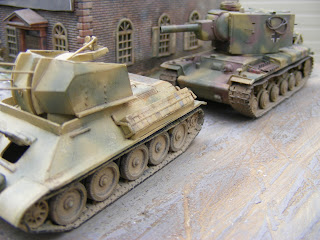 While on the KV series I may as well add the others I have, also from Trumpeter. Many soviet tanks fell into german hands from 1941 onwards, and when they were in running condition, and as long as they could be kept running, these were always put to use.


Next is Trumpeter kit 7230 KV-1E Ehkranami tank. The 'Ehkranami' refers to the additional armour bolted to the turret for improved protection. These modifications were reportedly done in a Leningrad factory.


Comments on Construction. As with Trumpeter's KV-2, this was a straight forward build, that presented no complications or problems.


Other comments. I built this one to match a period photo of one of these in german hands. The crew hatches can be modelled open which was a big help. I also needed to remove the lid off one of the equipment boxes on the mudguard, which then involved thinning the sides of the box, and I also needed to buckle the mudguard to match the picture. Final touch was to replicate the impact damage on the turret armour and find some decals for the turret. This conversion was easy and a lot of fun to do. 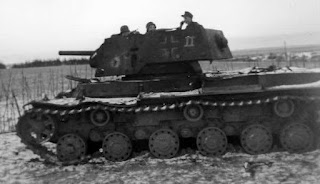 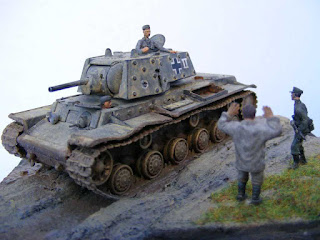 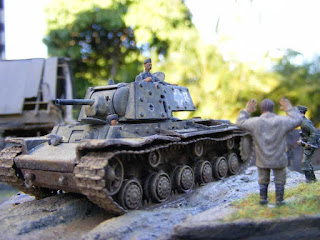 And now another KV-1, another from Trumpeter, kit 7232 KV-1 Model 1941. Again this one built from a photo of one in german hands, with the unusual difference that it has no front sprocket, and damage that suggests a mine, and has Panzer III or IV tracks on it. The claim is that this one was used as airfield defence by the germans, the makeshift tracks allowing it to be towed, as lacking a drive sprocket it could not be driven.


Comments on Construction. Again, as above, these Trumpeter kits are quite easy to put together. The tracks were donated from a Trumpeter Stug.


Other Comments. As with last build I had to open up a tool box, and have the lid open, the inside walls of the box were thinned & a lid made from plastic card. The build also needed to have a rear engine hatch open, which comes moulded shut. I drilled this out & used the driver's hatch, as the underside detail would be visible from the rear, and made a new drivers hatch from card. I also draped a tow cable over the back engine deck as per the original photo. The damaged mudguard was made by cutting away the front of the guard from the body, then twisting and bending it into a similar shape, & sanding it to make it thinner. The mudguard supports are solidly cast on, with all the KV bodies, I cut these off and replaced with slender evergreen rod, to make them look more like the real thing. The axle for the sprocket was a piece of evergreen rod. 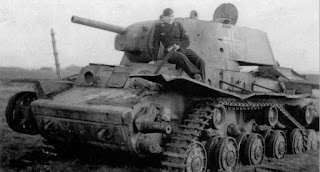 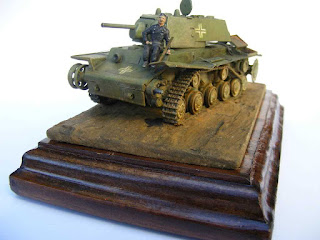 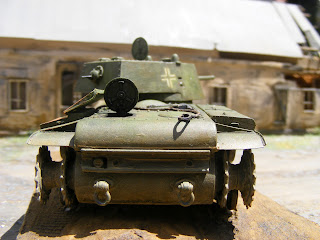 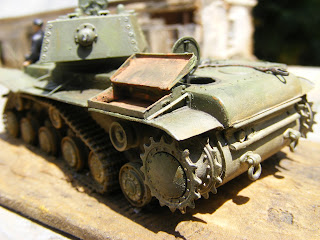 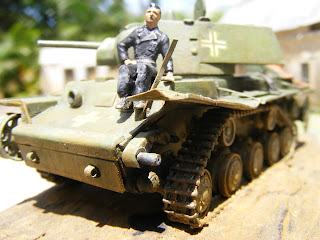