Comments on Construction. This was quite a straightforward build, virtually from the box. I used Tulle (a gauze like material) for the metal mesh behind the windows. All photos of these vehicles show that mesh was behind the windows, possibly as a safety feature should window glass breakage occur. I painted this one to match a late war photo of an abandoned Granit ambulance.

Other comments. No interior details in the ambulance body, no engine compartment details. I added an exhaust system, muffler being a piece from the spares box, and the tubing being fine solder, which is about the right thickness, rounded, and bends readily to replicate exhaust tubing. Leather tie downs added to the canvas cover are small pieces of spare brass etch. 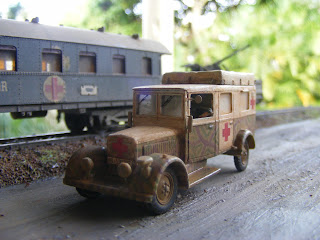 
Comments on Construction. Very crisp casting of parts, and general good fit of parts. Includes full engine and gearbox though bonnet can't be opened, it is cast shut. Choice of standard metal cabin or einheits (late war) driver's cabin. Very enjoyable build. The step below the cabin door is cast as a solid piece with the einheits cabin, this was cut off & replaced with wire.


Other comments. If you build this kit with the einheits cabin & compare it with the MAC einheits cabin Opel truck, there are obvious differences in size & shape of the cabin and engine compartment, and in the ground clearance of both vehicles. Looking at war time pictures, the MAC kit looks to be correct. These trucks were made by more than one manufacturer, so perhaps the Academy version represents a different plant's offering, or perhaps this kit is more representative of  the metal cabin version, as a whole. Still a very nice looking model. One glaring error with either version is the radiator grille - it has too few spokes in it, whereas the MAC kit has the correct number of radiator spokes. 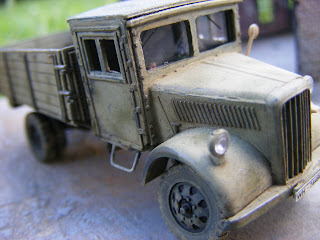 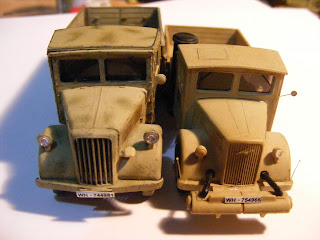 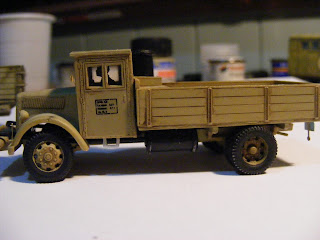 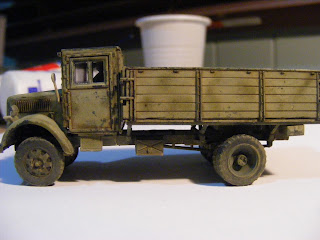