Having built the GAZ-42 last week, I was keen to keep on with the GAZ theme. These trucks will be useful for a large diorama currently in the planning stages. So I dug into my stash and dusted off the box that contained this kit.  It stated in the instructions that around 100 trucks were armoured by the Izhorsk plant in Leningrad & several were captured and used by the Finnish Army.

The kit comes with a towed Flak-38 to represent one of these captured trucks. I already used the Flak-38 on a BP-44 Flakwagen, so this build is only about the Armoured Truck.

I also intend this truck to be in russian service, not a captured finnish truck.

The kit. This truck parts are common to all the MW GAZ-AA kits, the difference being the inclusion of parts for the armour for the cab and the cargo tray. The build is quite straightforward, other than having to scrape cast lines off most parts, and having to be very careful removing smaller parts from the sprues. There is often some difficulty assessing where exactly to affix some parts due to no locating marks, and not very clear instructions.

The armoured cab replaces the regular cab, and though the interior cab detail is on one of the sprues, the instructions don't suggest fitting them, as they are totally enclosed (unless you decide to open a cab door) in which case they may be partially seen, though the inside will be very dark. I opted to build the cab as was, and did not attempt to open any doors. The cab parts are a so-so fit. A light application of filler was needed along the joins and careful sanding of these joins is needed, after the putty had set. The front radiator vents had a large sink mark which needed filling, and the side armour for the tray had to bent a bit into the correct angle before they could be attached.

Only enhancements were to add some rivets to the metal cargo tray brackets, and handles on the doors, made from stretched sprue. I also replaced the longitudal beams under the cargo tray with evergreen strips as the kit parts were not very well shaped. The plastic parts are quite brittle, & even larger parts can break easily.

I also had to file away at the inside edges of the mudguards to allow the nose of the armoured cab to fit neatly in between. The sanded edges can't be seen unless the model is upside down.


Below are kit parts ready for final assembly, cab has already had filler applied to all joins 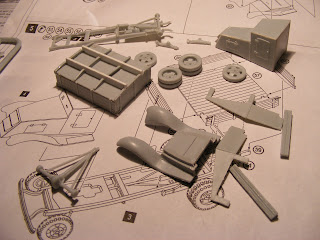 Underside of vehice, does not differ from other MW GAZ AA trucks 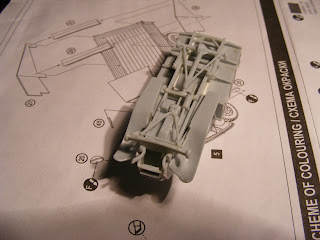 Rear view of truck, showing how armour does not fully protect rear of vehicle, and one of two 'benches' mounted in the cargo tray. 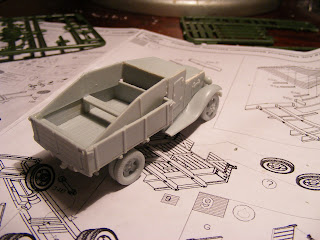 Front view of truck, filled areas can clearly be seen, MG came from a UM kit, as has slightly better casting than what comes in this kit. Stretched sprue door handles not mounted yet in this photo, nor rivets on tray brackets. 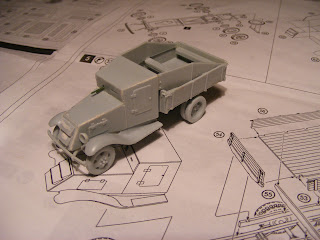 First spray application. Next job is to refine joins with sanding and filler before further work on paintjob, washes, weathering and dust can be done. 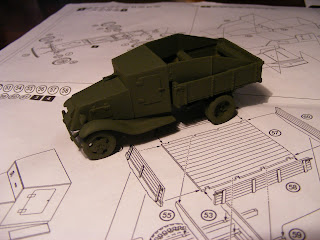 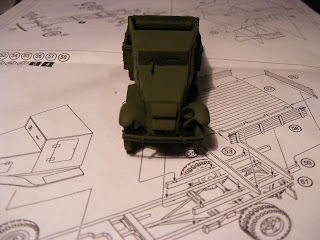 Update 05 August 2012. Today I sprayed Humbrol Enamel 226 lightly on some panels to create a slight contrast between the darker green (Revell Matt 68) that the vehicle was base coated in. This was after tidying up the edges of the bonnet and cab roof which needed another sanding, and a tiny dab of putty, then some more sanding. Headlights attached to the body with wire. 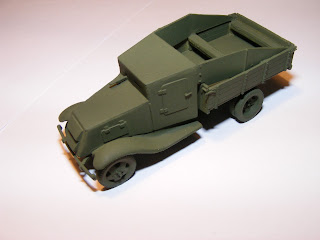 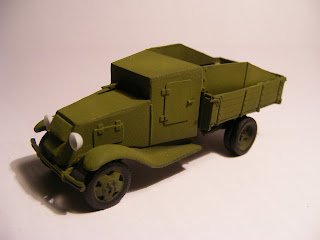 Update 08 August 2012. Vehicle has now been given a wash with 'burnt umber' artists oil paint diluted in thinners. This has created some interesting brown highlights around some detail, which can look like grime, grease, dirt, dust, or rust, depending how much oil paint you add to the mix

Below pic shows how the wash has created subtle brown highlights around door edges, engine hatches and front ventilating louvres 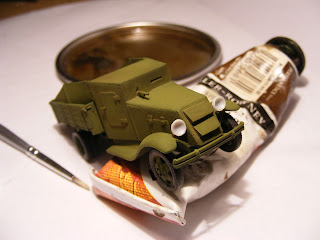 Side View again illustrating how the brown wash creates a slightly grimy look, and highlights details, at the same time (click image to enlarge) 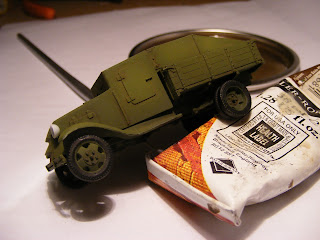 View of the rear area. The back tray was not given an overspray of Humbrol Matt 226 over the Revell Matt 68 basecoat. This was because I wanted the tray to be darker, as it would not get as much natural light as the flat metal plates of the cab. Timber braces/seats in the rear painted with Modelmaster 'Wood' flat enamel 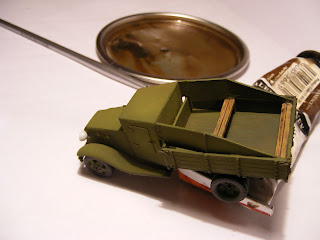 Update 12 August 2012. Progress continues with a light spray of mud on the undersides.

Below picture shows the GAZ-AA to the left, and the GAZ Armoured truck to the right, with the paint used to spray the light coat of watery mud to the undersides. I like the level of detail on the undersides. 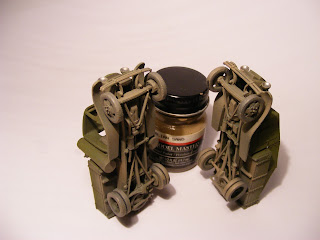 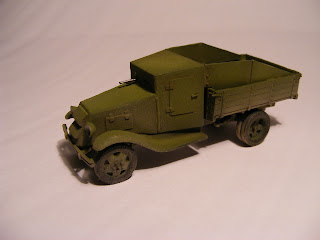 Update 26 August 2012. Vehicle has had more spray of muddy water splashes, mainly over the frontal areas. Built from the box, the only addition being door handles made from stretched sprue, and rivets added to the metal straps that brace the wooden cargo tray. The machine gun hatch cover was made from plastic card, as the one moulded onto the piece was sanded off when refining the joins of the cabin

Below are pictures from various angles 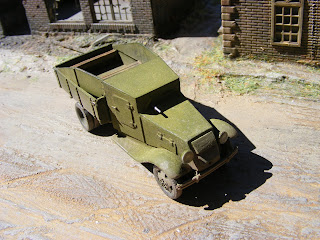 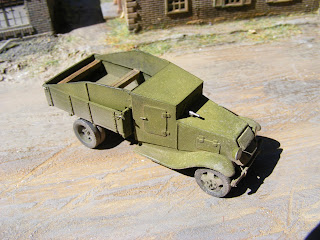 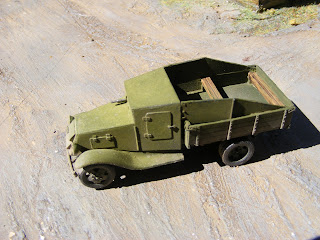 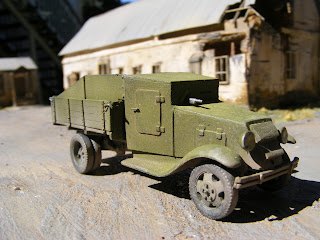 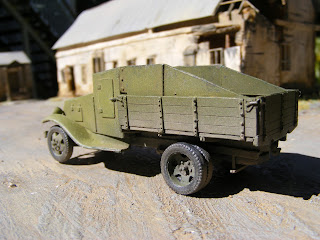 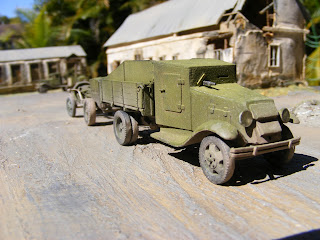 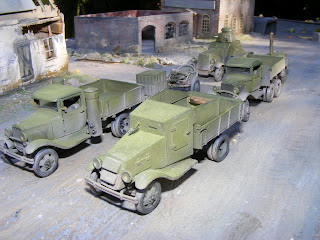 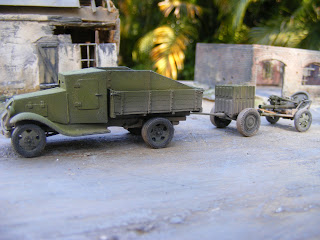 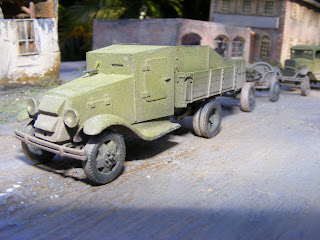