Hello. This was a great choice of release from Dragon, as the range of Passenger vehicles is under represented in 1/72 scale. With two in the box, this is also great value.

Kit Construction Comments. This kit is very good. Except the rear doors are incorrectly shaped. Period photos show that the vehicle had rectangular rear doors, whereas this kit has sharply angled shaped doors. A few period photos seem to indicate that angular shaped doors may have existed, but the consensus of opinion is that the side doors (which are angular shaped) could be removed & hung on the back, over the rectangular doors, and misinterpretation of these photos has led some to assess that some vehicles had angular rear doors. The reason for allowing  the removal of the side passenger doors & stowing them out of the way, would be to allow quick exit and entry to the vehicle, and also make the exit and entry quieter - which could be important in some tactical situations.

Parts are cast to a high standard & everything fits well together. The only other concern is that the sides are cast quite thick & there is no internal detail on the inside of the doors, not even the door outline. This does not matter so much on this kit as it has a canopy to disguise both these issues.

A small brass etch fret is supplied with non slip tread for the internal floor. Its a bit overscale, but if in true scale would be near impossible to see the tread, I see the overscaling of the tread as a reasonable compromise. As this vehicle has a canopy cover, and the floor is unseen I test fit them, but then took them out, to be placed in the spares box.

I decided to sand the rear panel flat, and then used 20 thou plastic card to make a new rear panel, scribing the outlines of the door into the plastic card. I then added hinges made from card and stretched sprue and a number plate and tail lights made from card. This was really not hard, less than 30 minutes work.


I also cut off the mudflaps from all 4 mudguards as these were cast very thick, and replaced with plastic card cut to size. Also the front tow hooks are oversized compared to photos, I sanded these down as much as I could.


The canopy is cast in clear plastic which makes it easy to paint up before attaching to the body. I used Lifecolor acylics hand painted with a 00 brush around the side window panes, and a larger brush over the top. I painted the vehicle in Floquil yellow enamel as a base coat, then a light overspray with Lifecolor Sandgrau to lighten it up a bit, and the detail was picked out with Citadel acrylics Badab Black wash

This vehicle builds into a beautiful model, regardless of the issues I mentioned. 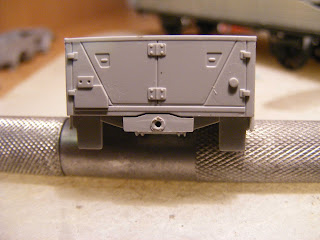 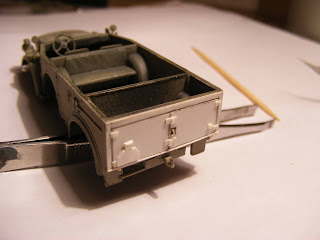 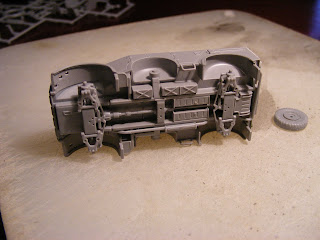 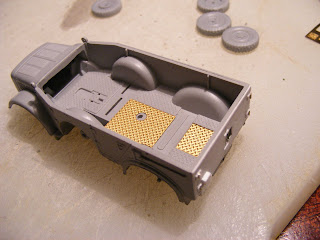 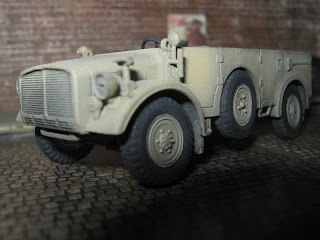 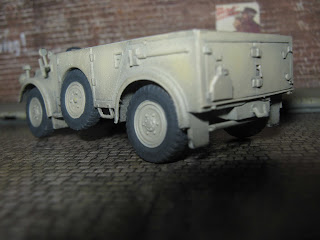 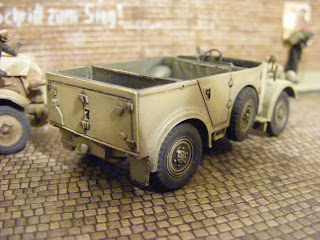 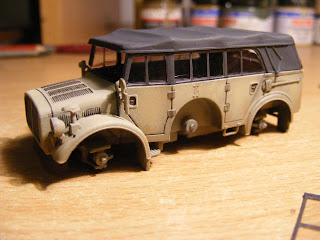 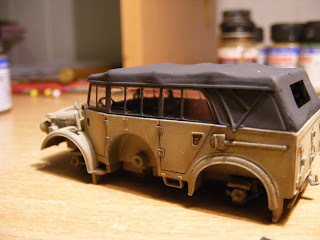 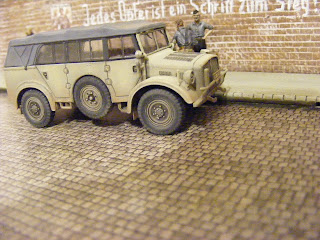 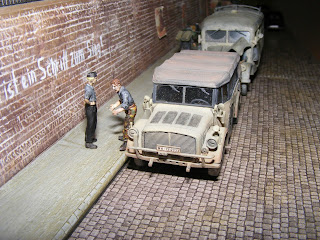