Hello. Another interesting kit with possibilities. These wagons were made between 1920 & 1940, and numerous pictures exist with them in both german & russian use during WW2. These wagons were used to transport all manner of military equipment including trucks and tanks (up to 20 tonnes loading), also were used to mount AA weapons on by both sides, and as a basis to build armoured rail cars on, and as leading wagons on Armoured trains to detonate any mine devices. Also photos exist of this wagon type being used to carry russian prisoners.

As per usual, I used a fresh exacto blade in my knife and a vegetable chopping board to neatly remove all etch parts, to ensure parts remained flat & undistorted.

The link and length couplers are the only let down on this kit as the links are etch and too flat looking. I built them up with layers of liquid super glue to improve the shape and this improved their appearance. I also built up the face of opposing buffer faces with some filler, to make one face at each end convex, as both are etch and flat, whereas one each end should be convex. The kit supplies some brass wire to make the braces for each side, but I substituted this for brass rod, as my wire was a bit bent and very hard to get it true straight again. Stretched sprue lengths could just as easily be made and used instead. Underside detail is basic, with no detail of the brake pipes and air reservoir which should be there, but this detail, even if it was there cannot seen when model is turned upright.

These wagons could be painted green or red, and in various stages of weathered conditions. I chose a paint job where the paint had weathered back to bare wood, & the metal work was rusted.

Sides can be attached in the up or down position. Locking handles are not supplied in the kit for the sides, these could easily be made from wire, I haven't made locking handles yet, but have made wire foot rungs at each end from fine wire bent to shape drilled holes to fit them & superglued them.

Altogether a straight forward and uncomplicated build that returns a good result without many hassles. 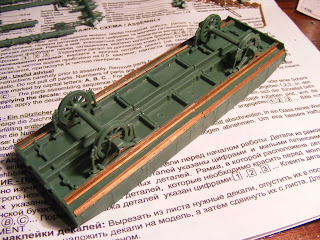 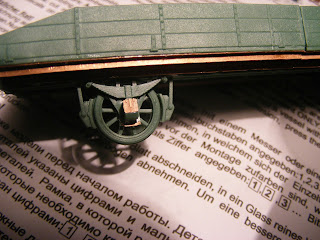 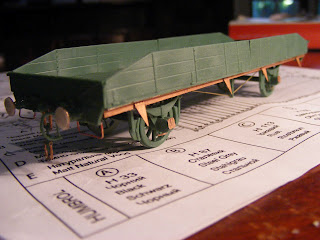 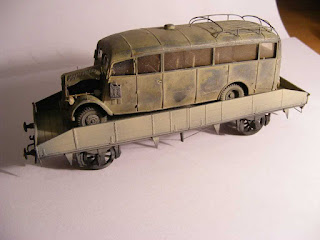 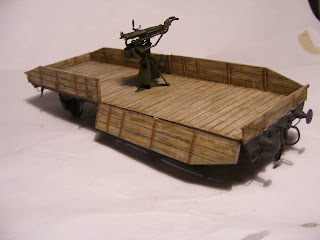 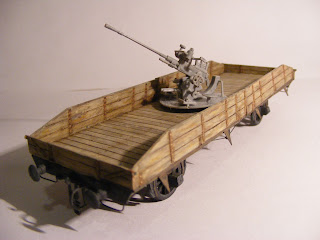