ACE kit 72267 Leichter Schutzenpanzerwagen UNIC P-107 U-304f. Another german conversion of a captured french halftrack, in this case converted to a light infantry carrier, about equivalent to a Sd Kfz 250 in load capacity

Kit construction comments. Some minor join issues with the body, easily dealt with by a little filler and sanding. I also sanded around the open top of all 4 sides to make the armour appear thinner, as in reality these vehicles were lightly armoured. 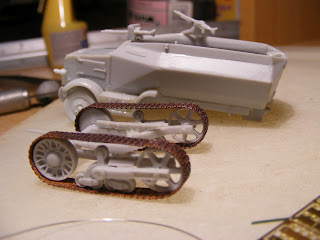 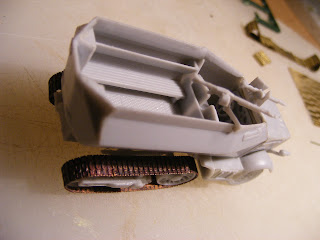 The track assembly is straightforward the only "must do" is to hold the metal etch tracks over a flame with a pair of rubber handled pliers till they are red hot for a count of 10. Then allow to cool naturally. This takes the spring out of the etch and its much easier to get smooth bends. I "preform" them  by wrapping the track around an object the same diameter as the wheel sprockets (such as a marker pen barrel) before attaching them to the halftrack assembly. Very important not to put a sag in the tracks as these were solid rubber, not metal, and did not sag. I cut 1.5 segments out of each track to ensure they formed a nice oval, and stuck them with liquid super glue. 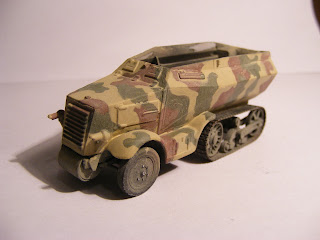 I started off making this as as 'combat taxi' but changed my mind to make it an ambulance, so removed the MGs & repainted it. Base coat was Floquil enamel, camo pattern is with Lifecolor Acrylics. 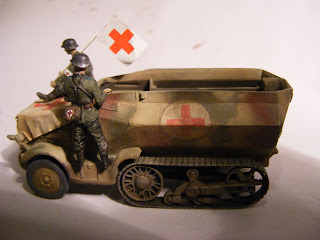 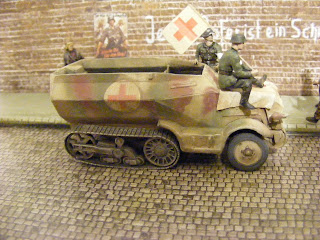