Kit Construction Comments. This kit is a smooth build, no real problems. One thing to watch is the rear axle which goes on top of the rear leaf springs, not under it, as per most vehicles.

To facilitate interior painting and adding of windows, after final exterior paint job was done I did not attach the body to the chassis until almost all assembly & painting & window affixing  was completed. The interior includes a dashboard and multiple passenger seats (not attached yet in this picture) 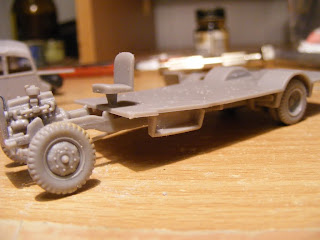 I initially used the metal etch frame provided in the kit for the roof rack and rear ladder - it was easy enough to bend to shape, and I drilled small holes to attach it. 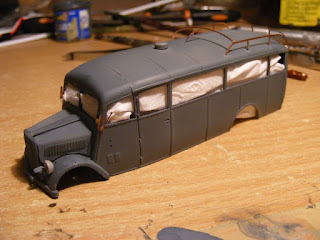 However it looked too flat. (click photos to enlarge) I bent some wire to shape, & replaced the etch, fastening it with liquid superglue. 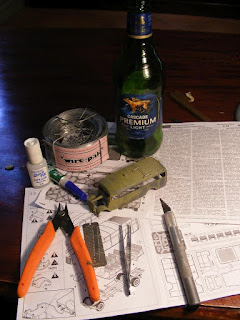 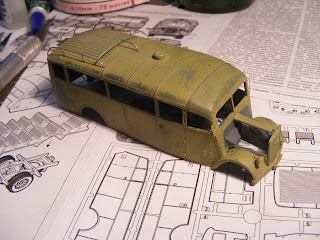 I built this one with one side of the bonnet open to show some of the engine which is quite detailed. The only tweaks I did was to add a radiator hose (made from wire) between the top of the radiator and the engine head. The radiator shroud had to be filed down so that I could get the body shell to fit onto the chassis.

When all inside and outside painting was completed, and windows attached, I joined the body shell to the base. The only problem with this was the drivers seat was in the way. I got around this by cutting off the seat at its base, then gluing a wire to the drivers seat base, & drilling a small hole in the floor exactly where the seat should be, and threading the wire through the floor, and when the body and chassis was joined, pulling the wire through a hole in the floor so that the driver's seat sat upright, then applied a drop of liquid superglue to the hole where the wire entered, & snipped the excess wire off.  Another way might be to not attach the roof to allow access to all the interior for painting and window affixing, then attaching the roof panel last.

Initial grey paint was with a grey Humbrol Enamel, next coat was Lifecolor Gelbbraun acrylic. This was rubbed off in places with a cotton bud to give a worn look, then a light overspray of Lifecolor Sandgrau acrylic was applied over that, in varying depths. Tyre hub details picked out with Citadel wash, Badab Black. 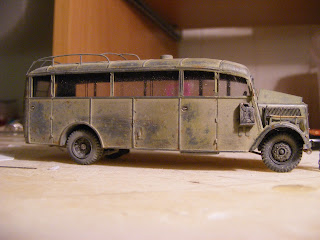 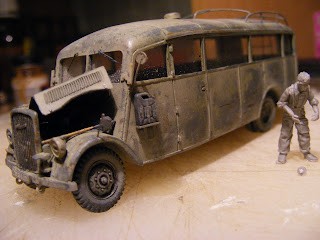 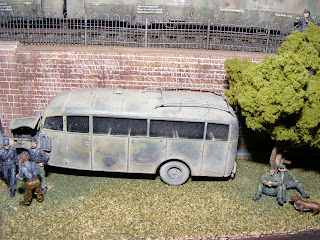