Hello. I've had this kit in my stash for a while. I really like odd and unusual vehicles, and this one fits the bill for me. I was a bit put off making a start on this one for some time, as MW kits can be a bit of extra work, so it sat unwanted in my stash.

But the recent GAZ-42 build reminded me that A bit of extra effort is well worth it. So with a glass of something calming to sip on, and a good movie on the TV for distraction, I decided to get the build underway.

The Build. Like all MW kits, some parts can be cast quite thick, with cast marks around the edges & can be very firmly attached to the sprues, so care needs to be taken removing the parts, then a bit of time is needed to scrape and sand the edges to remove the cast lines and attachment stubs. I use nippers to carefully cut all but the fragile parts from the sprues.

The Chassis is essentially a GAZ AAA, with a new armoured body built on it. The chassis was said to be strengthened.  The rear wheel springs, axle and differential assembly differs to that on the GAZ AAA truck, being heavier and more complex. Edit - GAZ-AAA chassis was found to be not strong enough foir the armoured body, so a Ford Timken chassis was used, this explains the different rear axle/suspension assembly.

The Body is made up of several pieces and straight away it was evident that there would be fit issues. This is mainly due to the thickness of the pieces. I carved away at the inside edges of some joins with an exacto blade to get a closer fit. Despite this, every join still needed a careful application of filler (I like Testors Contour Putty  for these tiny fill jobs).  When dried all the joins had to be carefully sanded with a fine thin jeweller's file.

Rivets. The vehicle parts in the kit have a number of rivets. However looking at photos of surviving Ba-27M vehicles in museums, its evident that there should be many more rivets. Some of the cast on kit rivets are a bit misshapen too. I intend to resolve this with Archer rivets, I have a sheet of these ready to go. No further building until all rivets are applied, to allow good access to all panel edges for rivetting purposes...

Below the body parts are joined and filled, waiting for the putty to dry before they can be carefully sanded 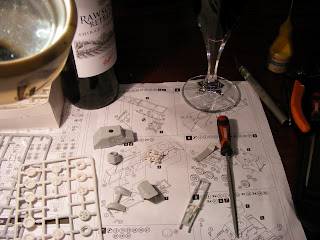 After careful sanding the body parts were spray painted Light gray (Modelmaster enamel) to check how neat the joins are, some still need a tiny bit more filler and another careful touch up with a file. 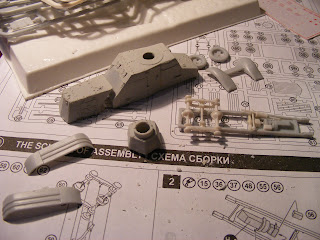 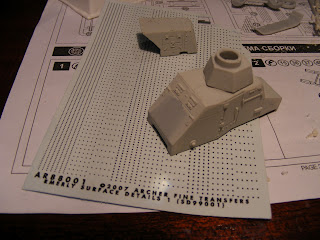 Update 30 July. A start has been made on the rivetting. This required cutting out of the decals into thin strips, soak a few seconds in water, then applying along almost all panel joins (from checking plans & photos of this vehicle). Unfortunately the thin strips tend to snap into rows of 2 to 5 rivets & the decal glue is not very effective, so to seal these on I'm using matt lacquer which does a great job, doesn't leave a visible layer and dries totally invisible. Only a few hundred more rivets to cut out and apply............... 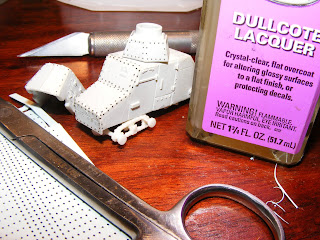 Update 03 August. Most rivets are now in place. Body just needs a bit of tidying up, then ready to apply some paint. Applying the rivets took a fair while, though should be worth it, the film they are printed on is very thin, so should be invisible when painted, just leaving the subtle rivet head showing 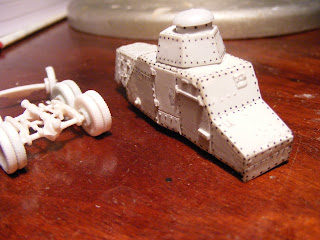 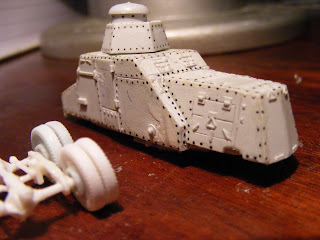 Body is resting on axle assemblies in the below picture, final assembly won't occur until the vehicle has been painted 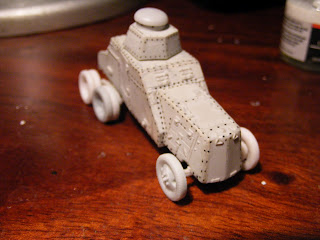 Update 05 August 2012. Vehicle has been partly sprayed with Revell Enamel Matt 68. An uneven coat was intentionally given so as to create a contrast when an overspray is later done with another shade of green. Body is not attached to the axles and wheels at this stage. 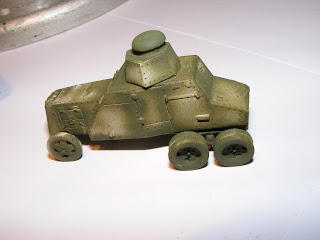 Update 12 August 2012. Vehicle completely oversprayed with Humbrol Matt 226 enamel green, a few days ago. Today I sprayed Model Master 'Italian Sand' matt enamel on the underside & lower surfaces to simulate the appearance of the vehicle having been over wet and dirty roads (but not heavily muddy as in spring or autumn)

Vehicle not fully assembled in below picture to allow easier access to spray some light mud splashes. The rear axle assembly is different & much heavier than on the GAZ AAA, according to printed sources, this is because a Ford Timken chassis was used, which was stronger than the GAZ-AAA 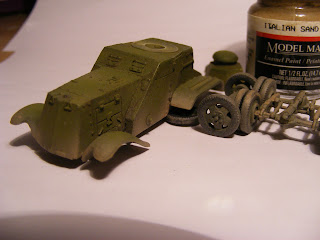 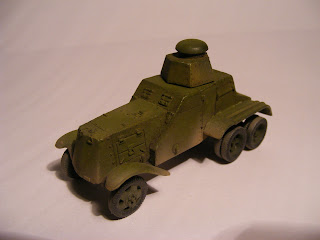 Update 14 August 2012. The armament & view port have been added to the turret. Front and rear tow hooks added, and spare wheels.  Headlights were attached to wire, and mounted on body via drilled holes. 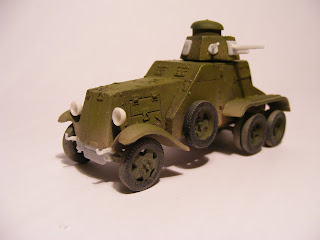 Update 26 August 2012. I had been a bit short of spare time since the last update, but today I have completed this build. The newly added parts since the last update have been painted green, and the headlights have been completed (painted silver inside, the filled with liquid 'window maker' (which seem to be diluted white wood working glue). The rivets can actually be seen after I lightly rubbed over them with the tip of an eraser, which removed some of the paint, to allow them to 'pop' out a bit. Then more light dried dust was sprayed on the lower areas.

Below are pictures from multiple angles of the vehicle. The only thing I have not added to this vehicle are the shovels & any decals. Pictures I could find of this vehicle on the web show no shovels, or markings when in soviet service (except a few captured ones in german service have german crosses). This model was built from kit except Archer rivets and door handles made from wire (as kit ones are jusr solid blocks. Gun barrel drilled out, and headlights filled with liquid 'window maker' 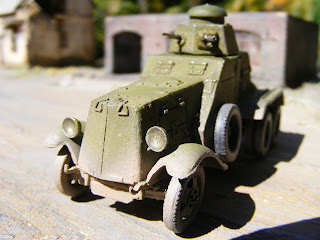 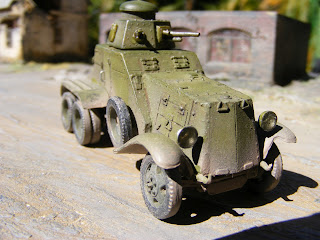 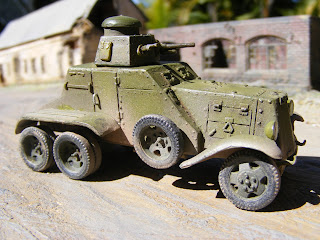 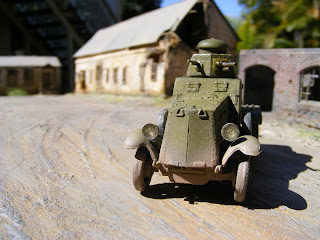 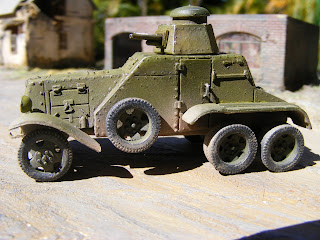 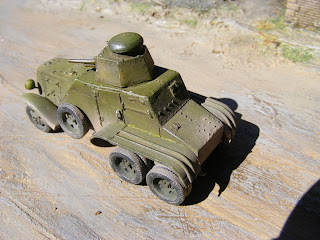 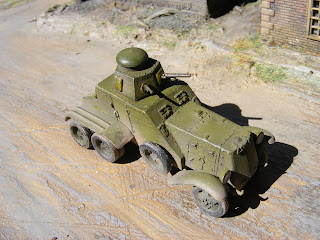 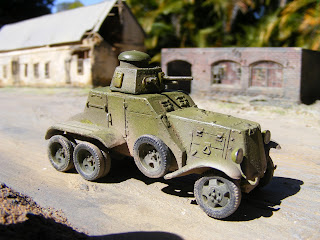 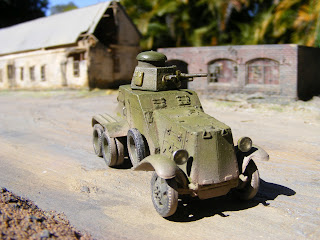 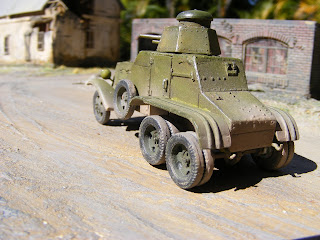 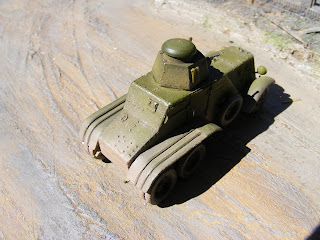 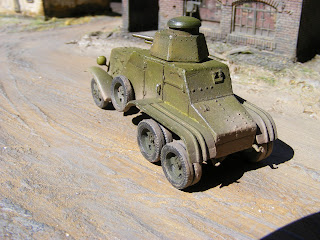 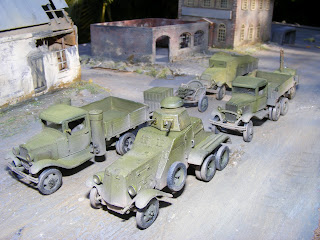 While the vehicle is complete, the kit comes with a diorama base. I will complete and paint the base soon.