Here is the 3rd of my current build project - the Autoblinda AB 40 Ferrovaria. This will be another OOB build as I don't have any comprehensive reference material for this vehicle. I have obtained 2 kits so one will be with "rubber" tyres, the other with "steel" rail wheels.

This vehicle differs from the later AB 41 by virtue or a different turret and armament. And this model has been converted for rail use, with rail wheels, and sand boxes fitted front and rear. Sand boxes have been fitted to locomotives for many years, including up to the present day. The purpose of the sand box is to release fine grain dry sand onto the rail just in front of the wheel, so that the wheel can gain a grip, as a smooth steel wheel on a smooth steel rail can slip, particularly when starting from a standing stop, where an uphill grade is present, or when the rail is wet or icy.

The Kit. Two sprues, a set of instructions, and a small decal sheet make up the contents in the box. One sprue is very similar to the AB 41 kit, (but not identical as has different turret compenents and differing tyres. A separate sprue for the parts that make the rail version, and the sleepers (or ties) and rails to make a length of track to sit the model on. As with the AB 41, all parts are crisply cast, with almost non existent flash and cast lines. 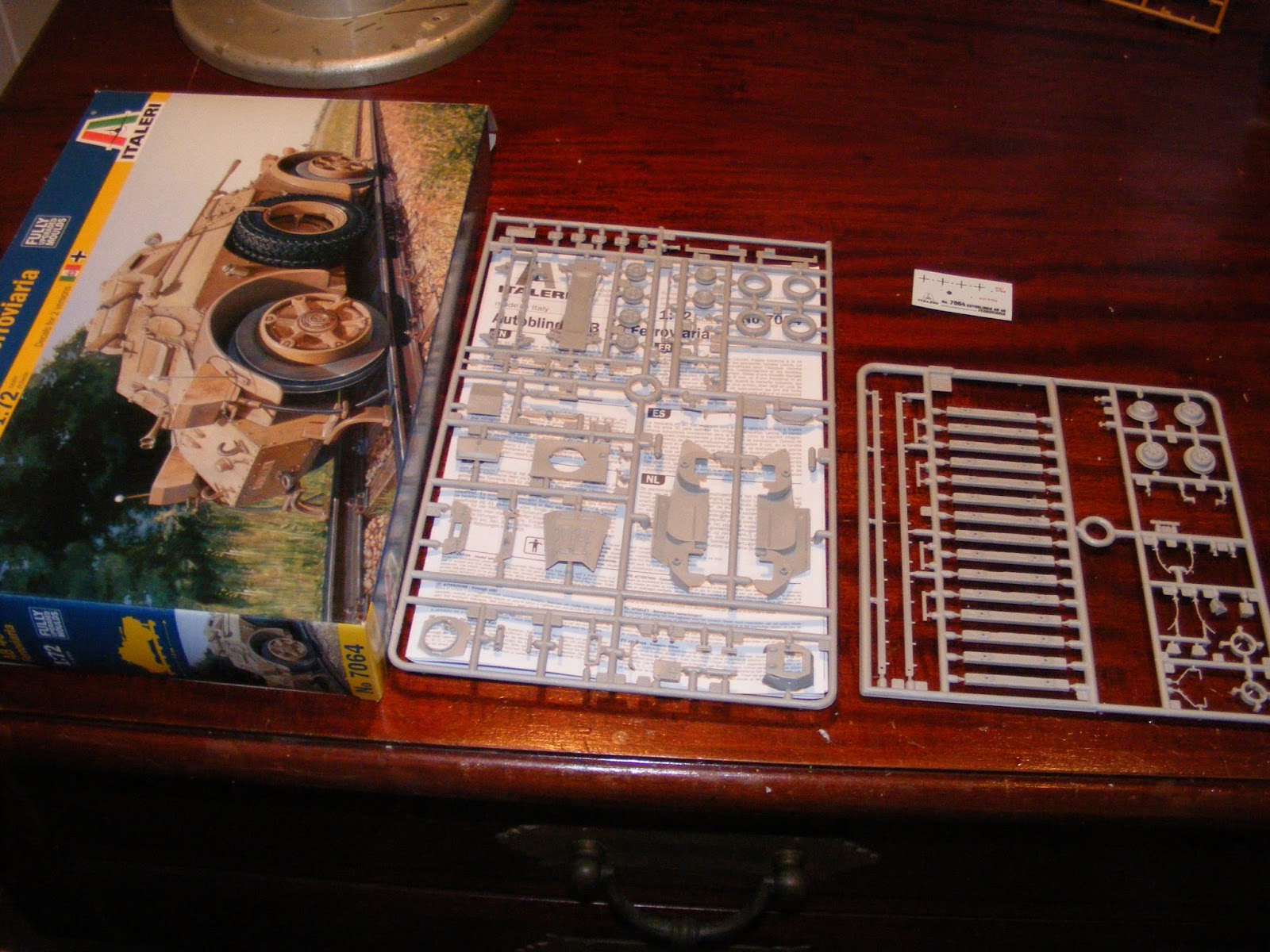 The Build. Again very straightforward. Steps 1 through 6 are the same as the AB 41, being the body construction. Again 5 holes have to be drilled to attach some parts to the body and underchassis. 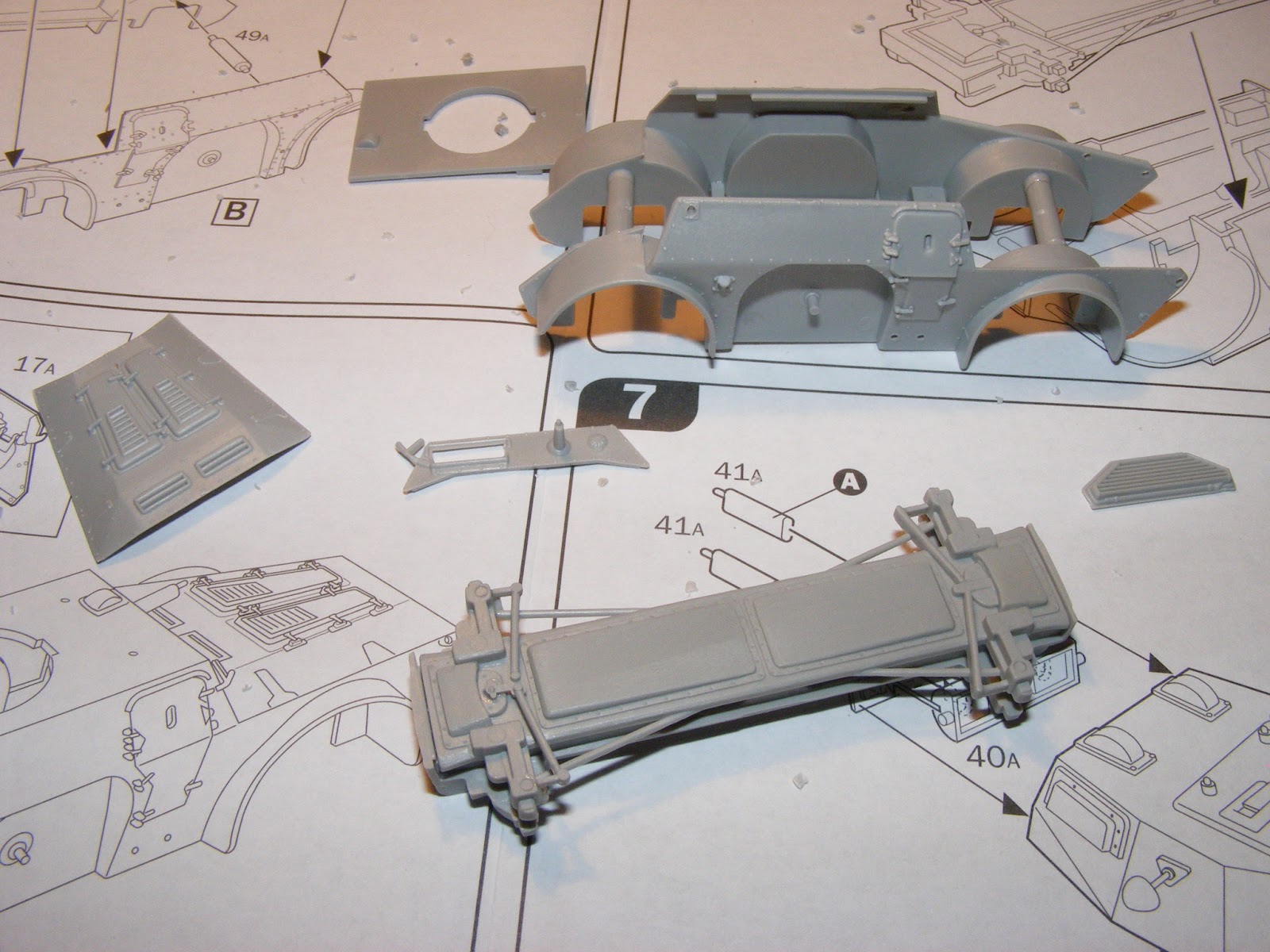 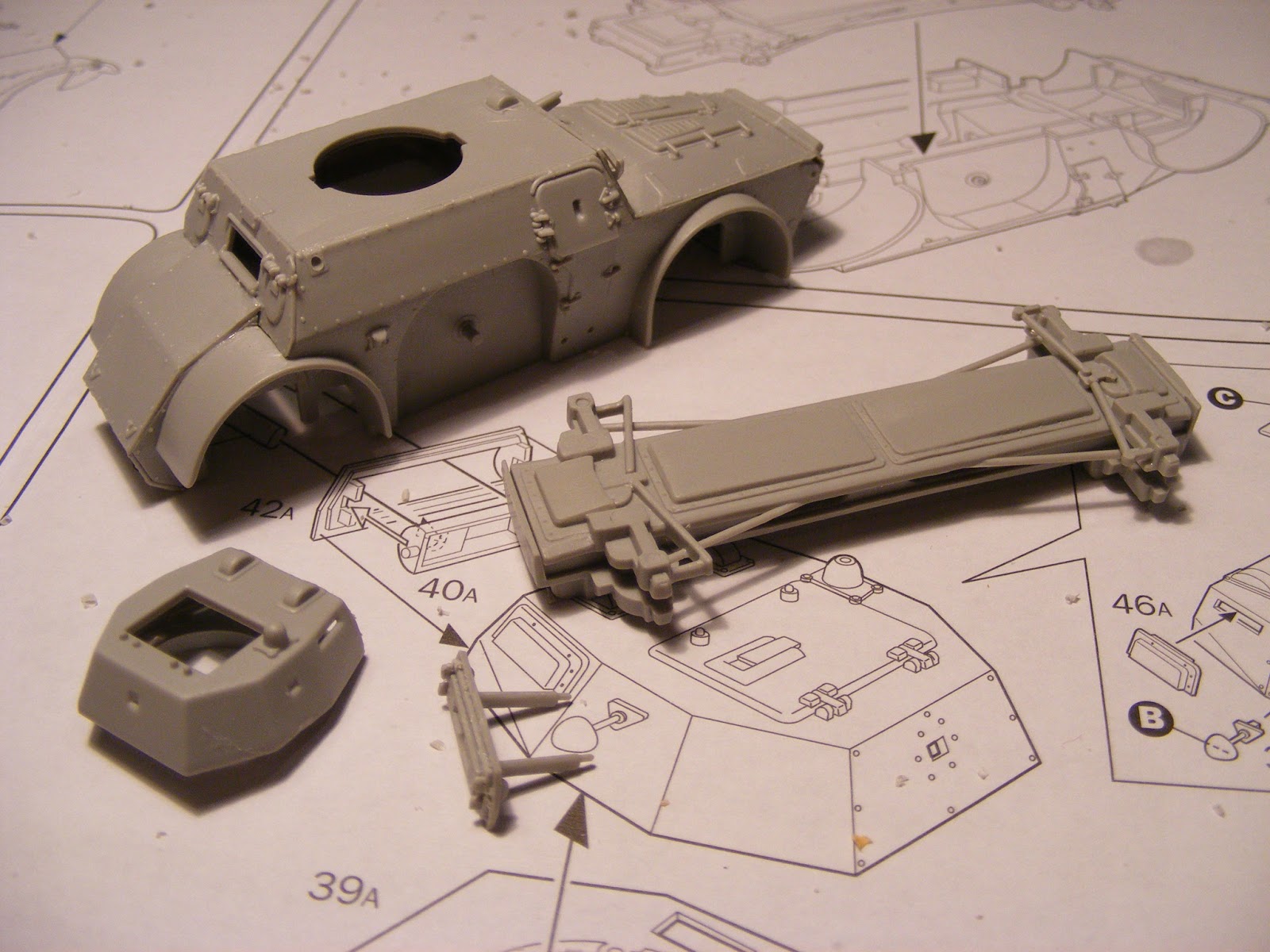 Fitting of the front sand boxes and pipes.  The instructions are a little vague regarding exact placement, and no markings on the body or mudguard where these should exactly be mounted. Browsing the web for close up pictures assisted with placement. The pipes extend very close to the top of the rail which looks a bit odd, but is prototypical, as the pipe has to be very close to direct the sand accurately. The rear box and pipe assembly was more straightforward. 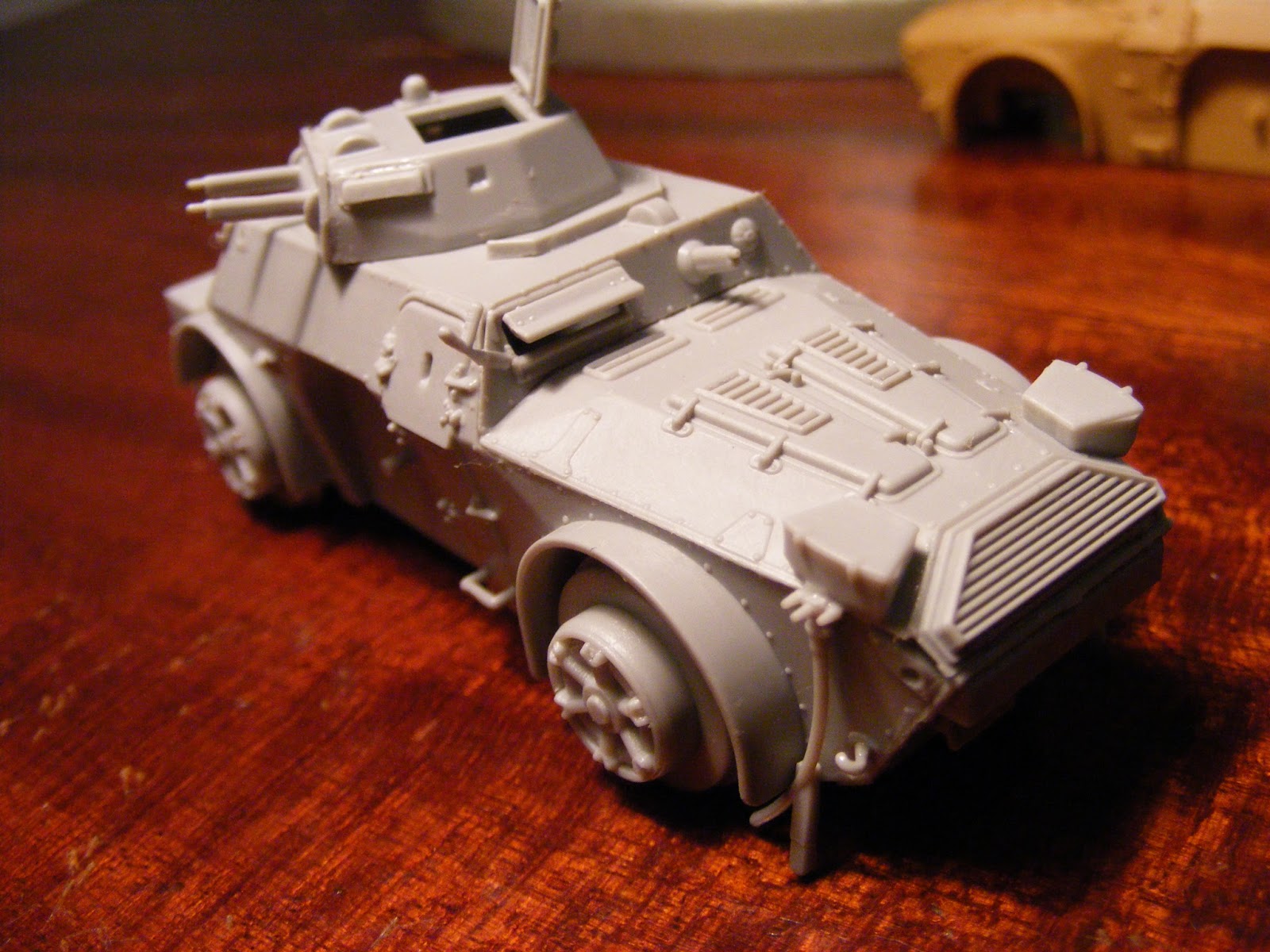 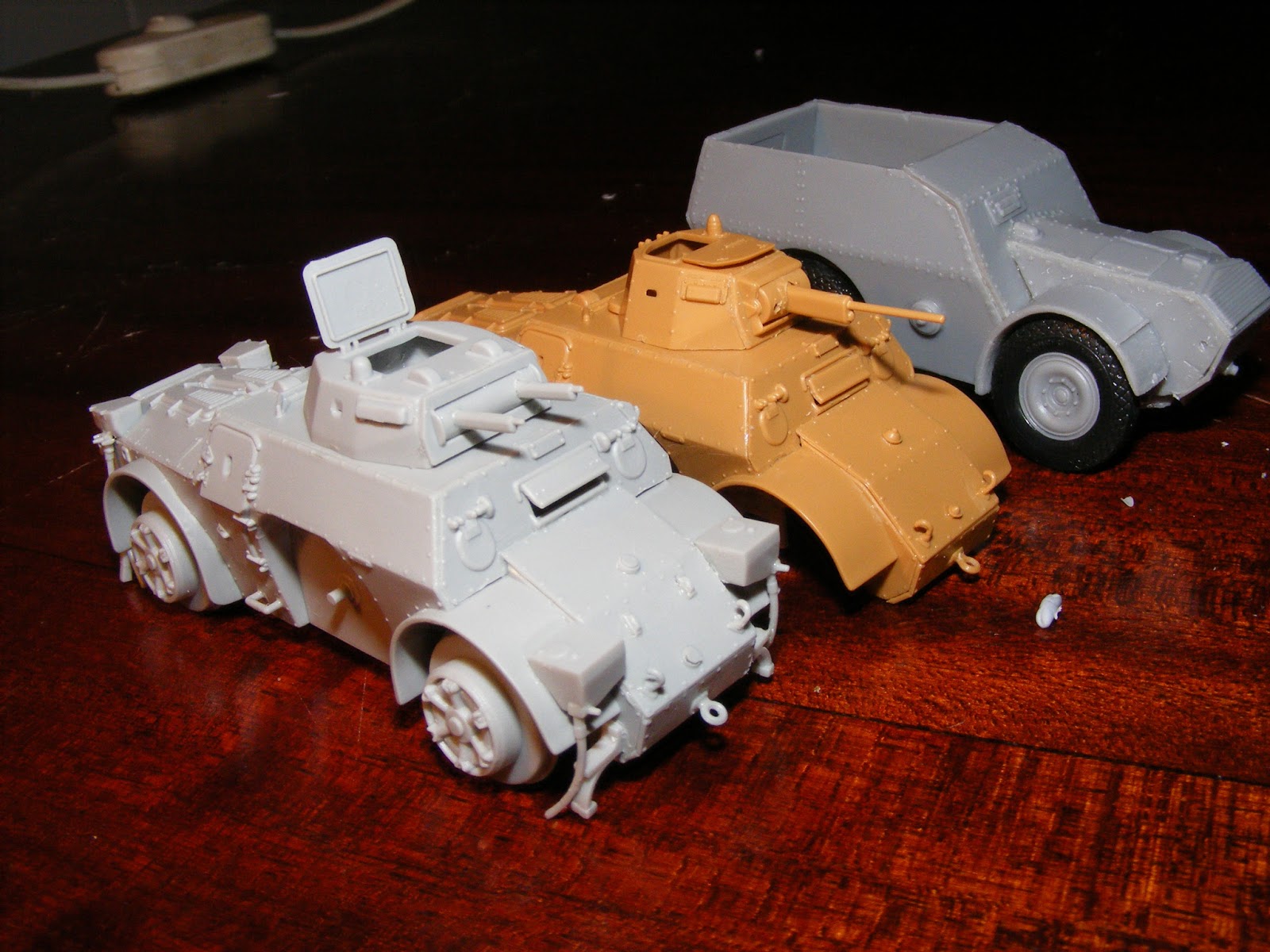 Update Thursday 31 January 2013. I have repositioned the rear louvred panel on all the AB series, as I believe I had it incorrect in the earlier picture. I have also obtained another AB 40 which will be the 'rubber wheeled' version

I am also now checking and filling hair line gaps, prior to the next job, which will be undercoating 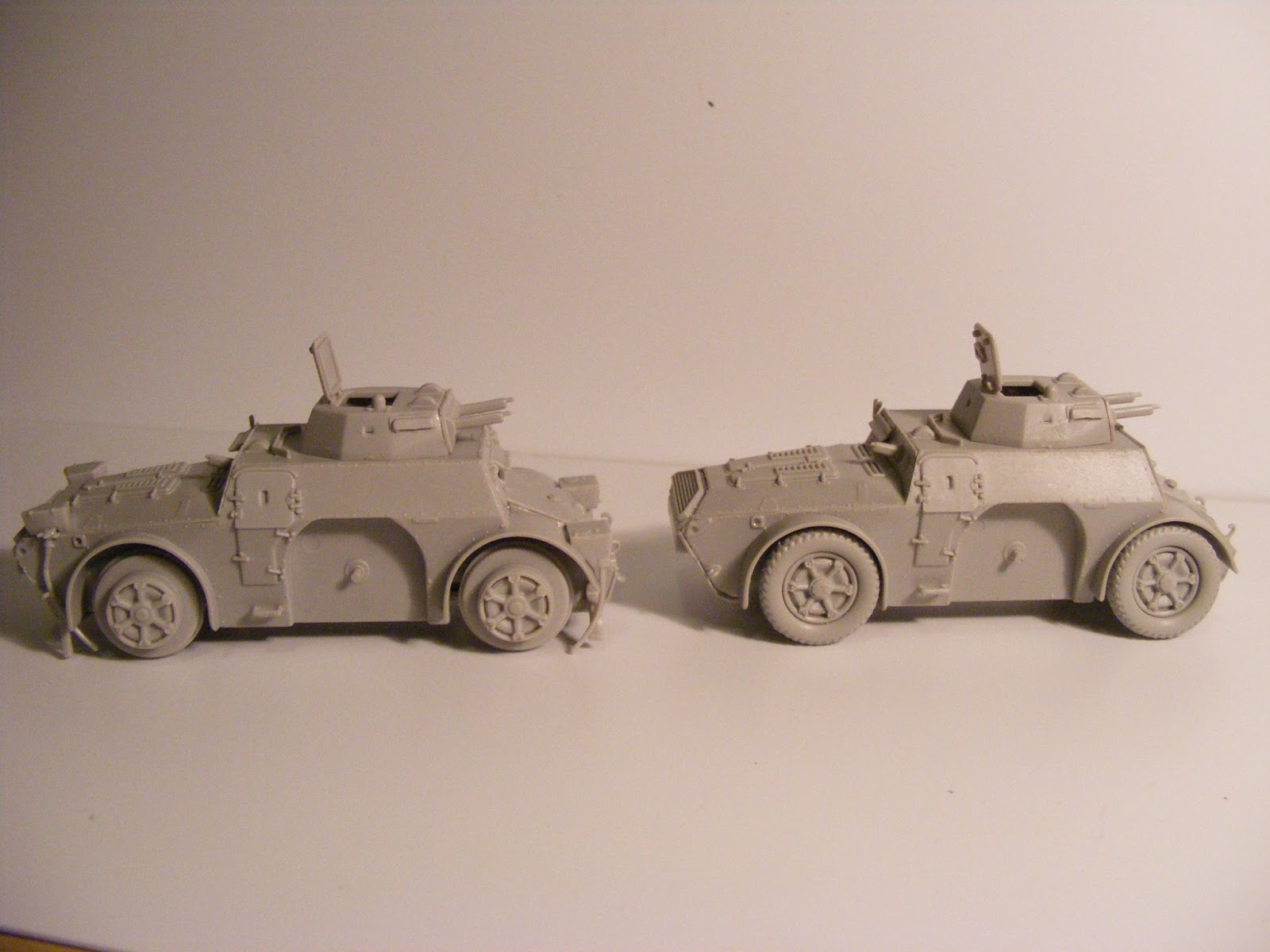 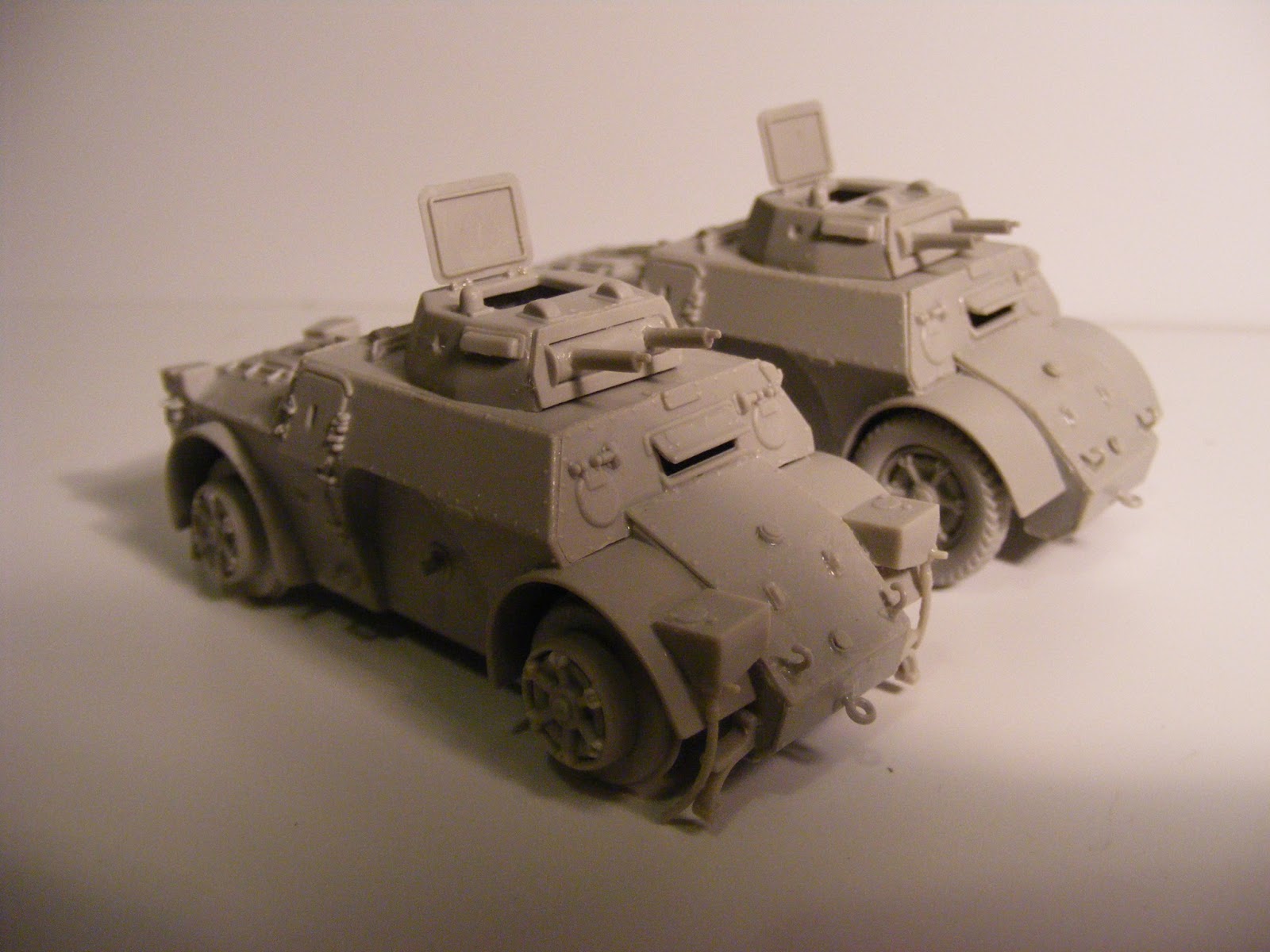 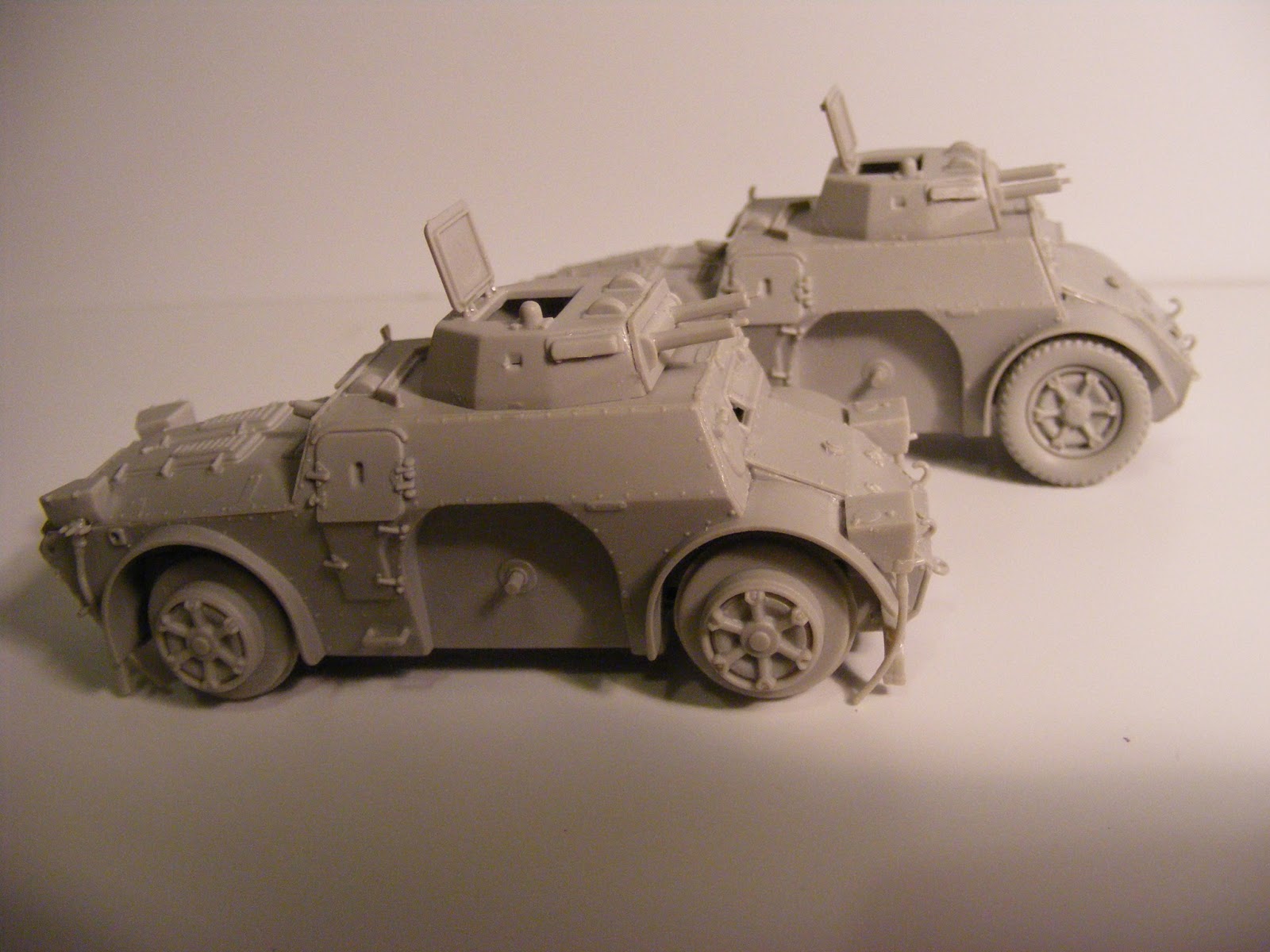 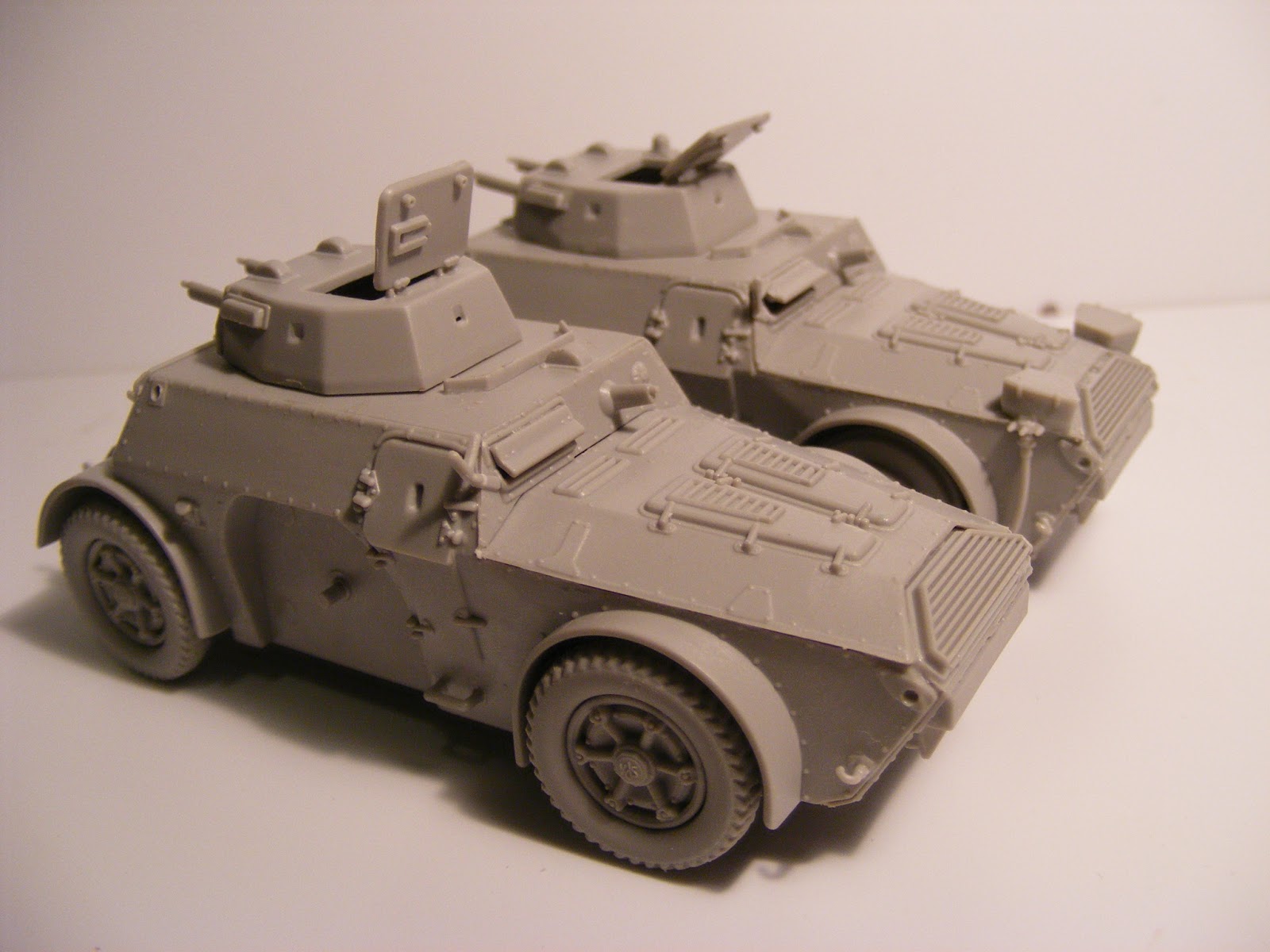 Update Sunday 03 February 2013. Painting has commenced. First the vehicles were given a pre shading spray of Tamiya Flat Black Enamel. I personally feel this is essential in small scale as the models are so tiny that realistic light effects caused by angles which provide shaded (therefore darker) areas have little opportunity to exist in a model a few centimetres long.

After the flat black was dry (a few hours) I then gently sprayed Humbrol Enamel Matt 94, being careful to only very lightly spray in the areas of natural shadows and join lines, keeping most paint towards the centre of each panel. 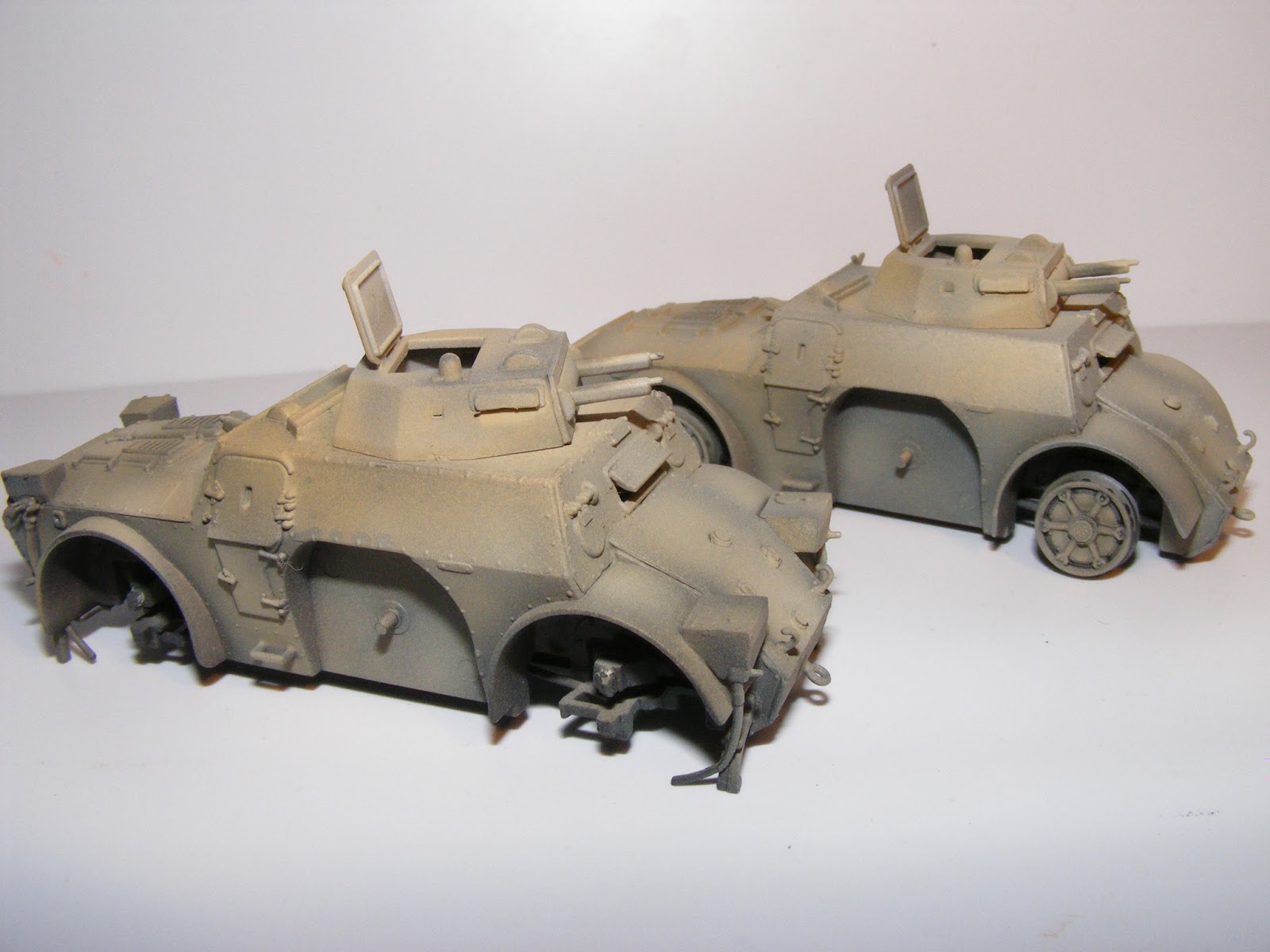 When that was dry (a few hours) a light overspray of Humbrol Enamel Matt 148 (which is lighter than the Matt 94) was carefully sprayed mainly in the middle of each panel. 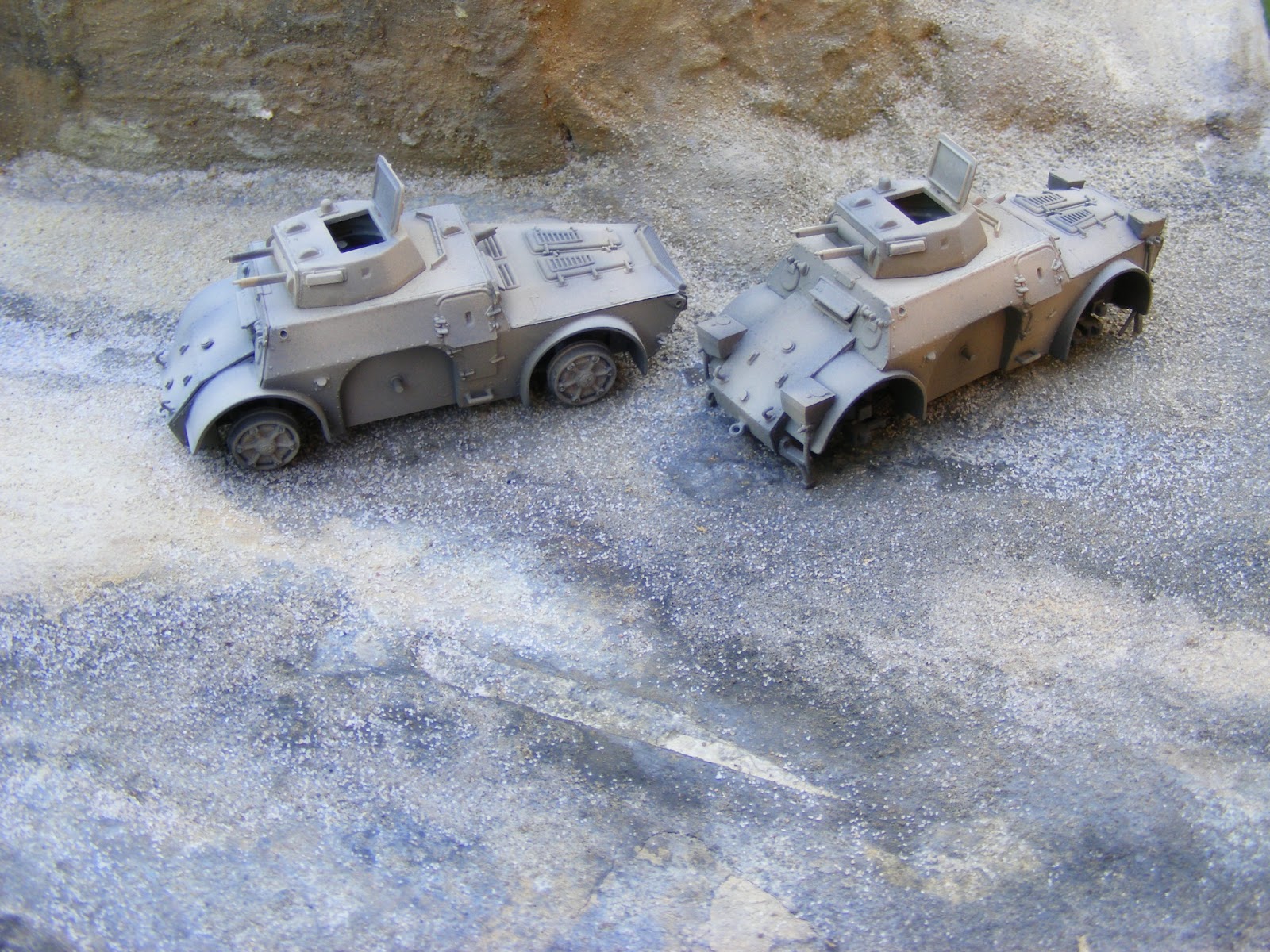 Update Sunday 03 March 2013. I have painted one of these in a 3 colour camo, similar to what is seen in many period photos, using Lifecolor Rot Braun (Red Brown)and Olivgrun (Olive Green) acrylics, brush painted. Then a wash of Citadel Agrax Earthshade and a light spray of Modelmaster Italian Sand on the lower edges to simulate dust/grime. I haven't added all the tools, or the large side mounted aerial, as period photos show these were not always fitted, particularly when in german use. I also added the 'Libia' sand tyres that come with the AB-41, just for fun. One source on the internet (beute.narod.ru) advises that the sand tyres were in plentiful supply even late in the war, and photos exist also of them commonly being used as the spare wheels, on vehicles fitted with the rugged tread 'european' tyres. Some dislike the sand tyres for ebing lacking in detail. The general shape is about right, the 'lines' on the wheels are very faint on the outer sidewalls, and about none existent on the face of the tread. I guess these could be said to represent very worn tyres. 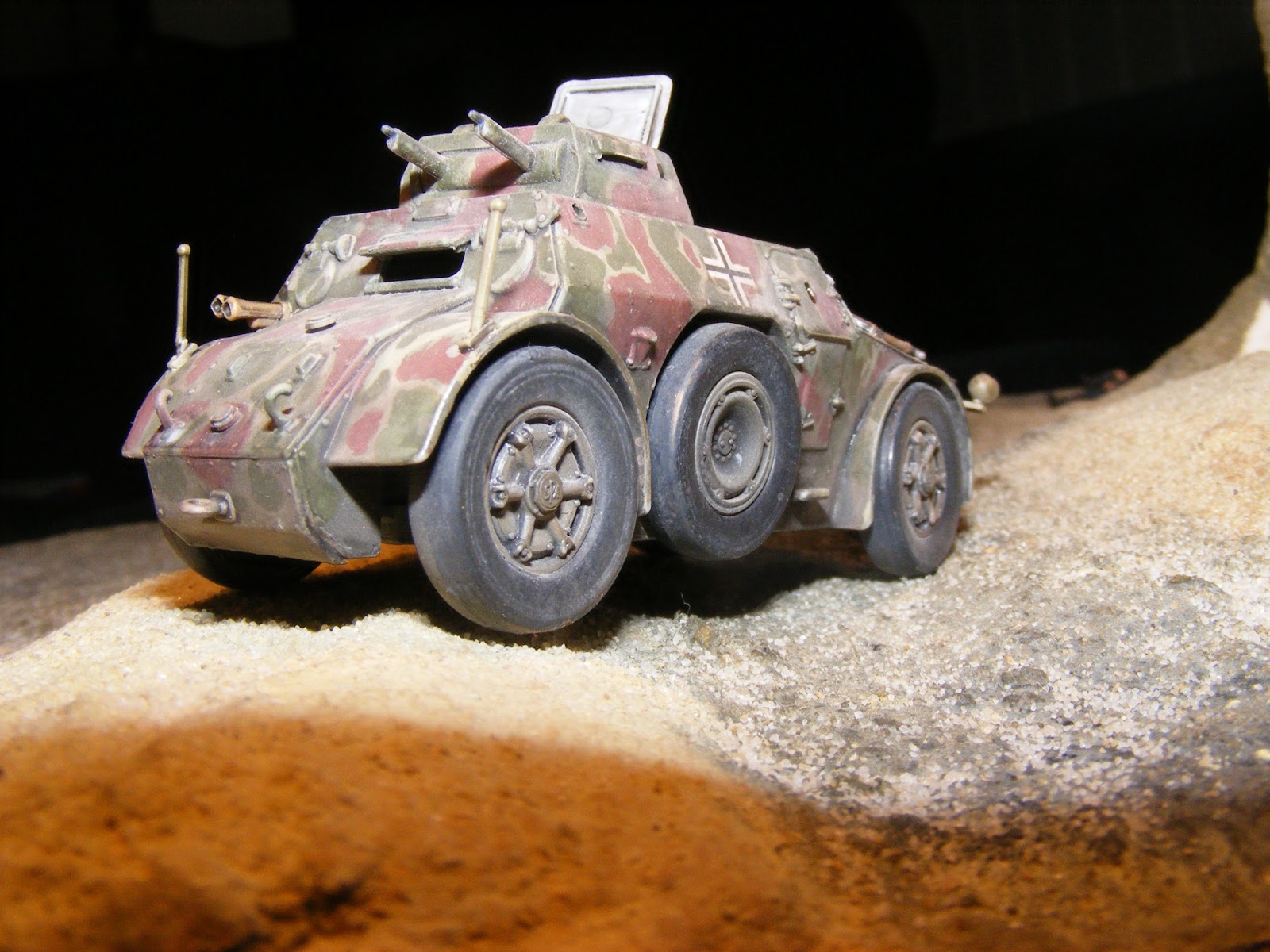 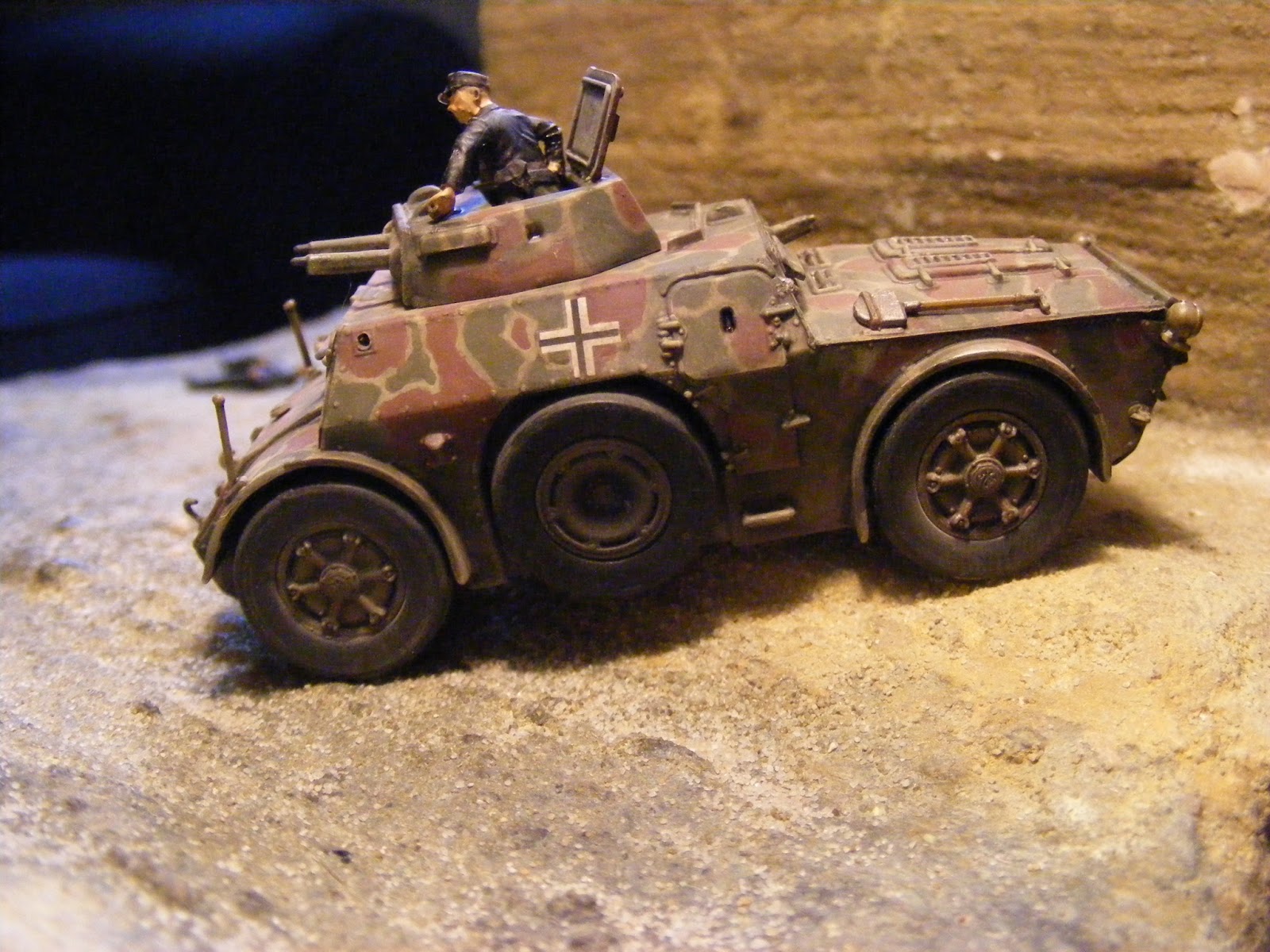 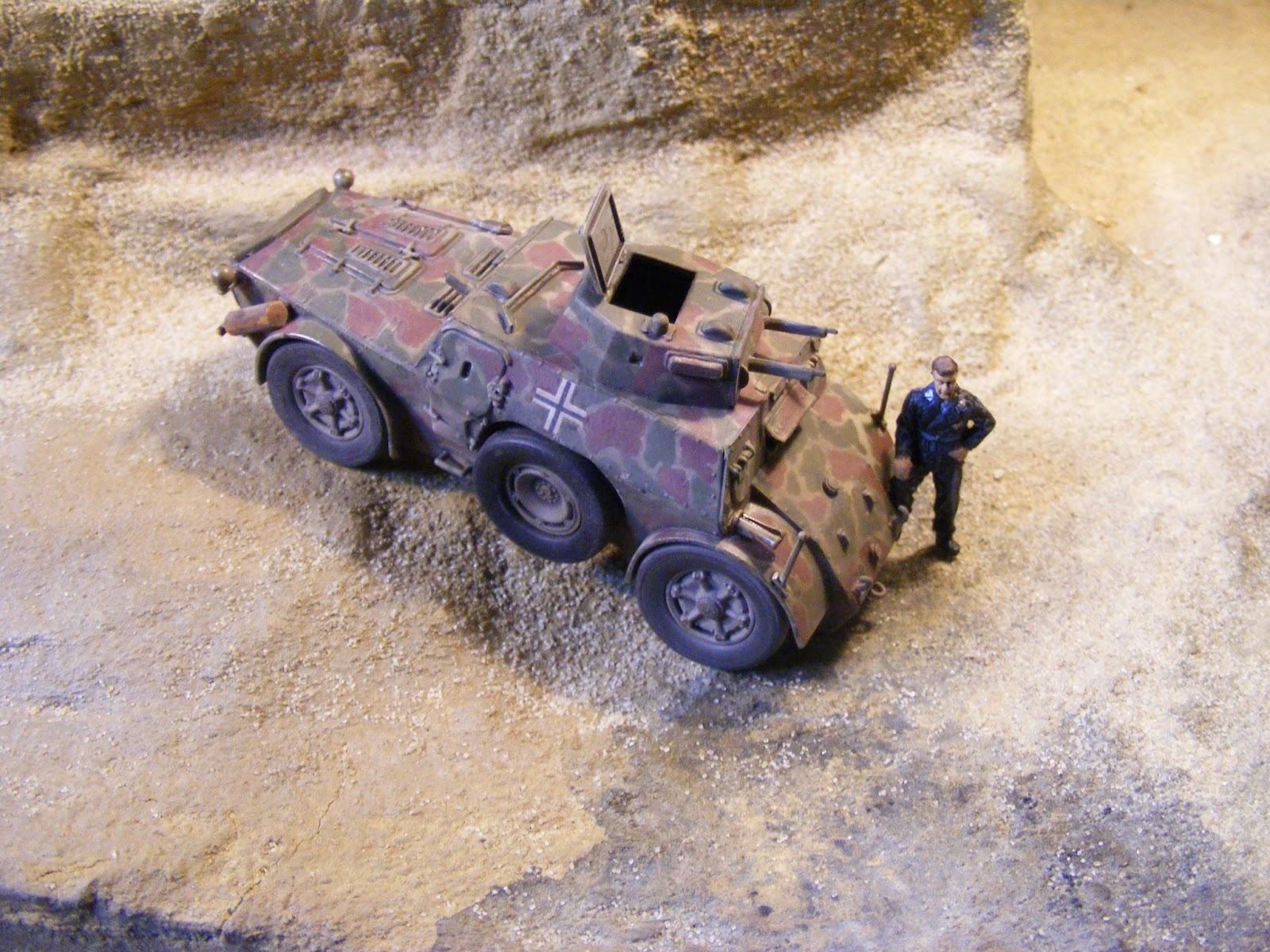 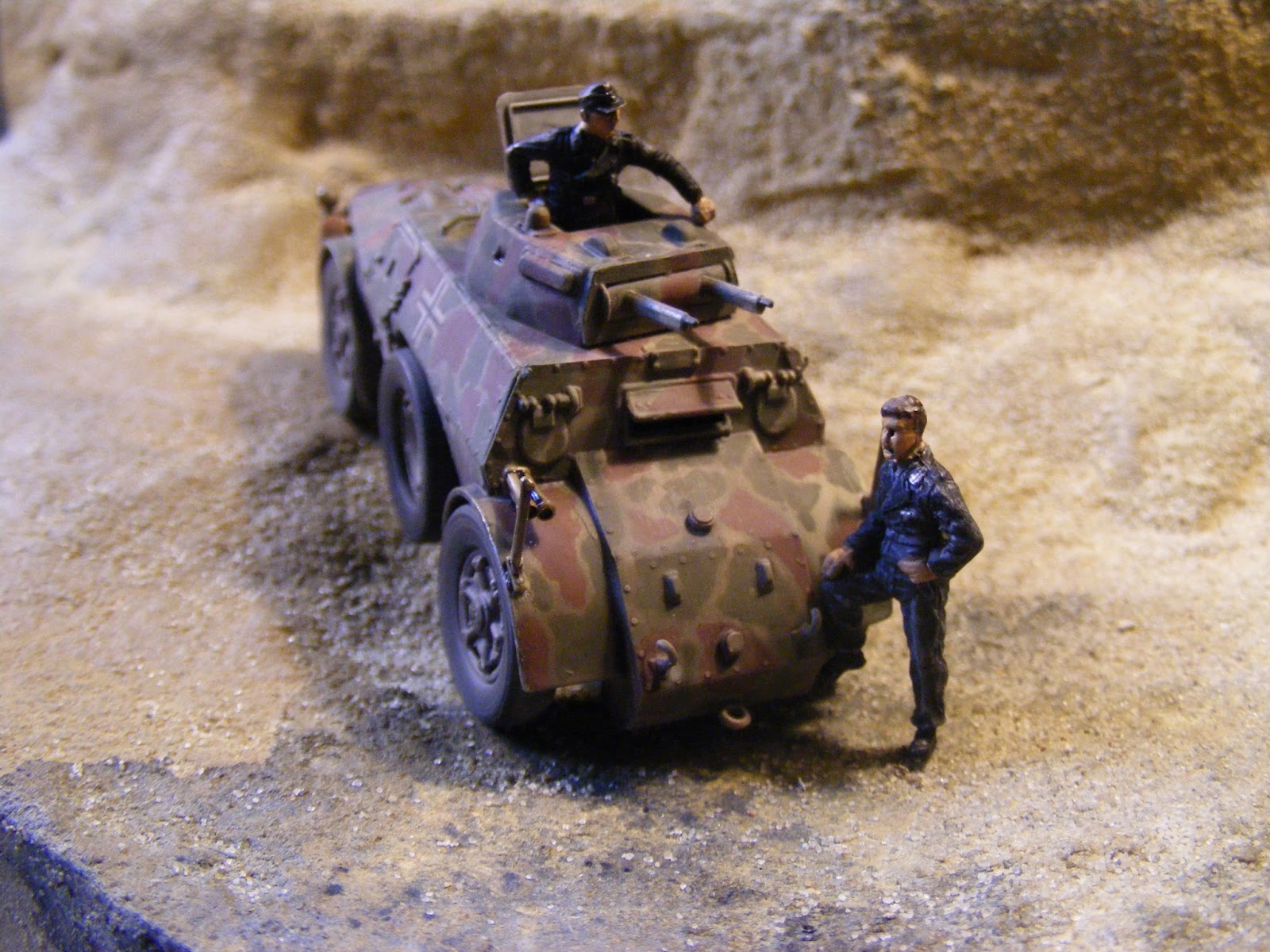 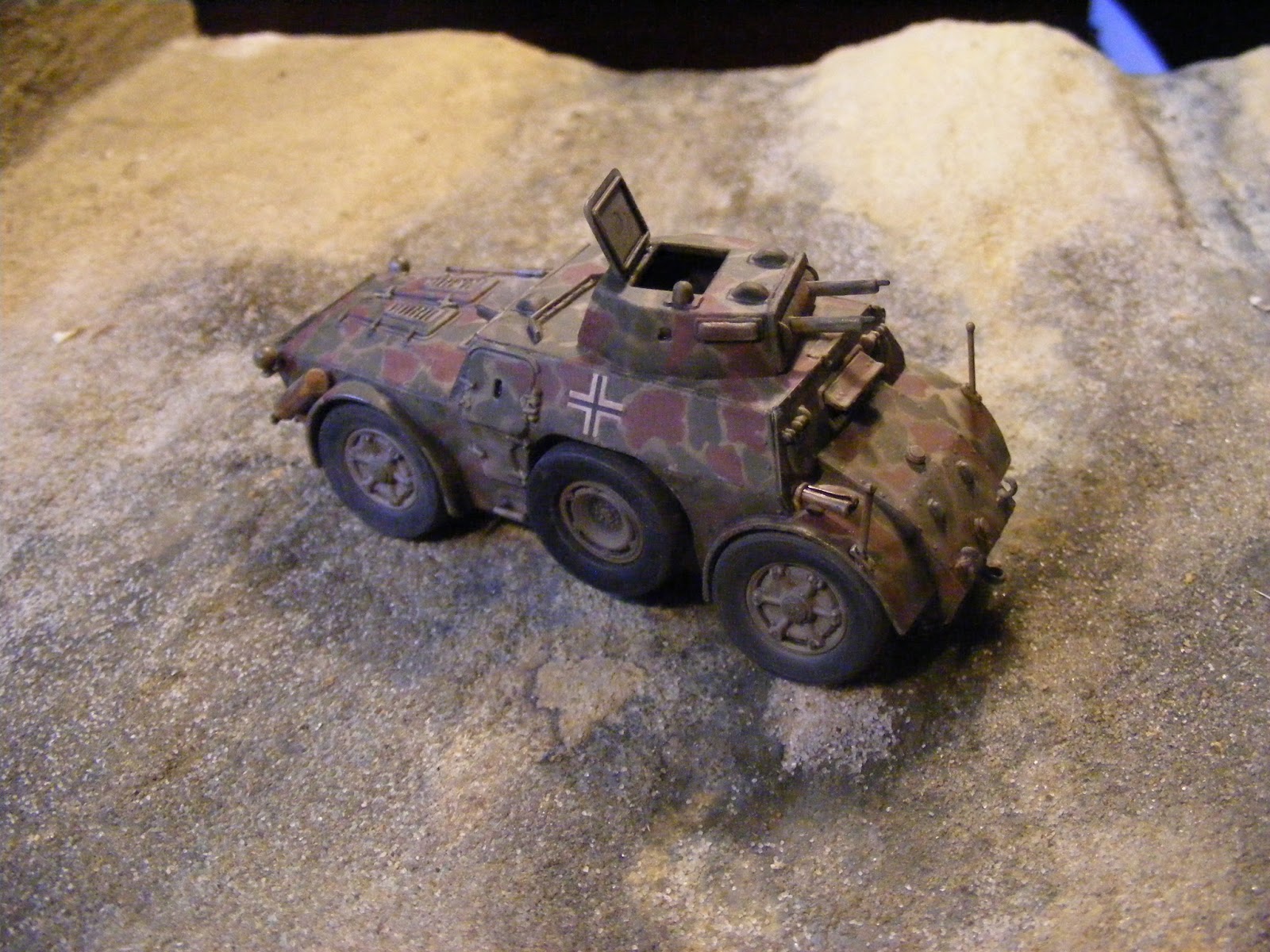 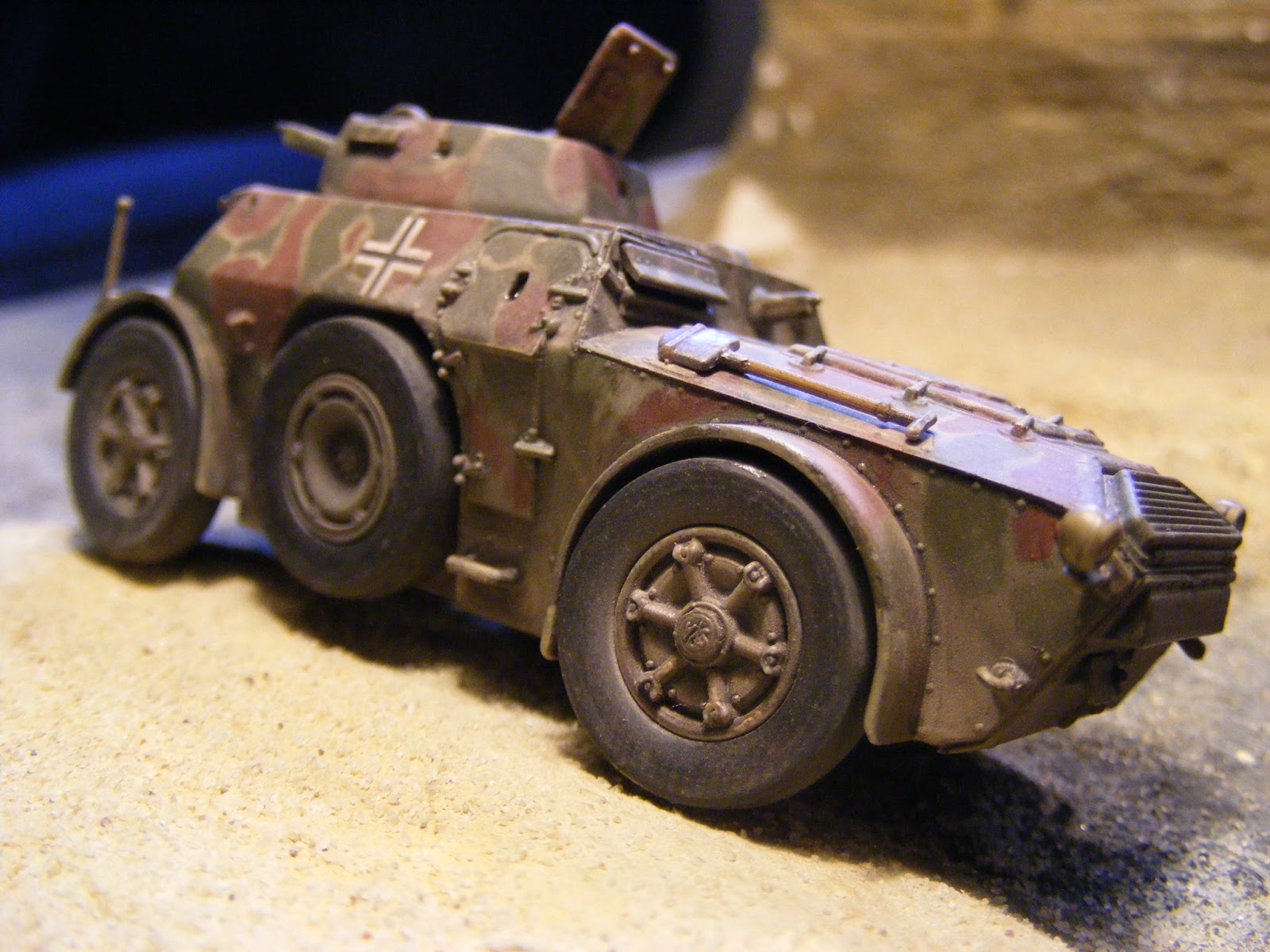 The rail version was left in an overall sand colour. I fitted the long side aerial to this one, pics below 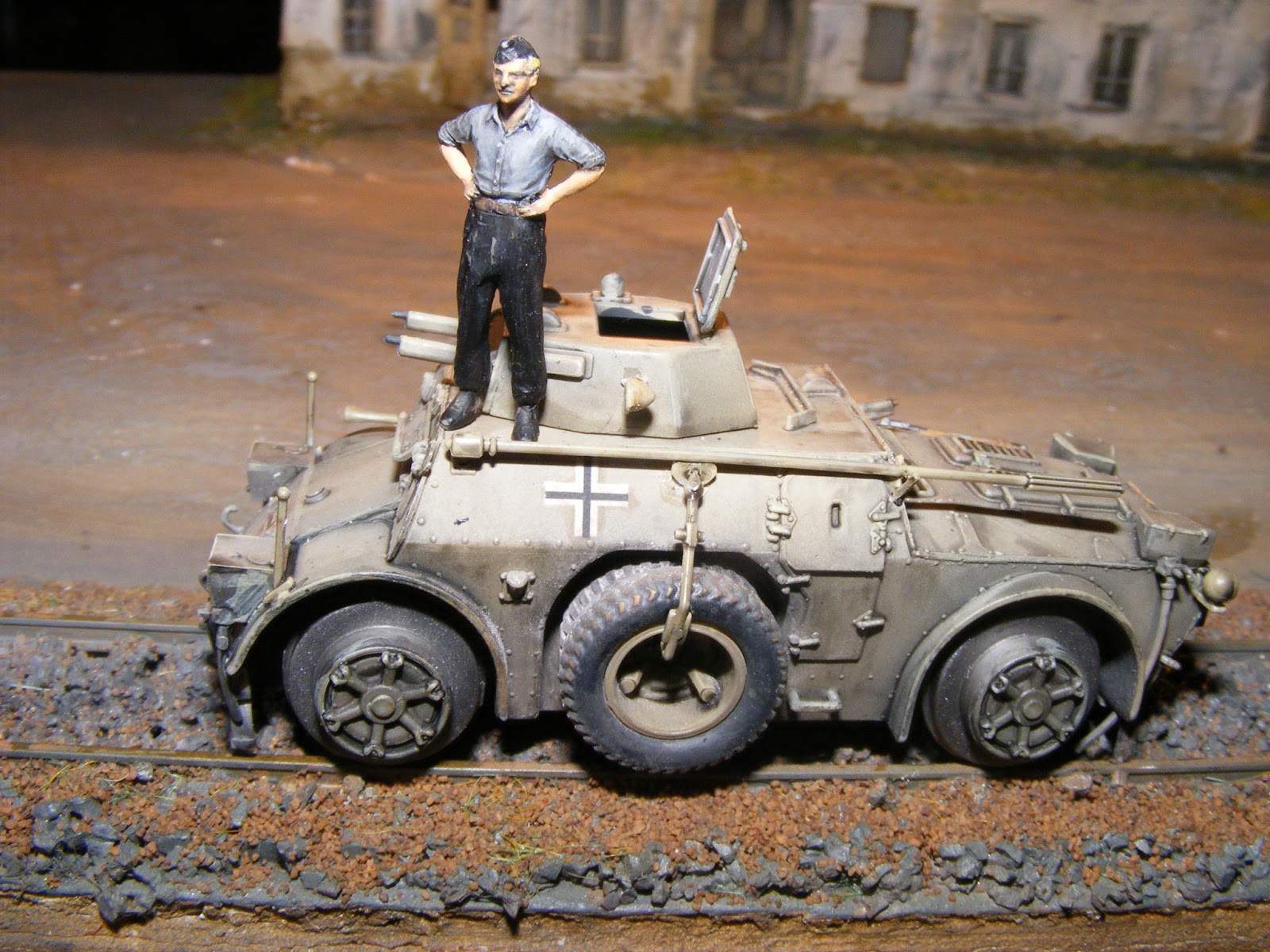 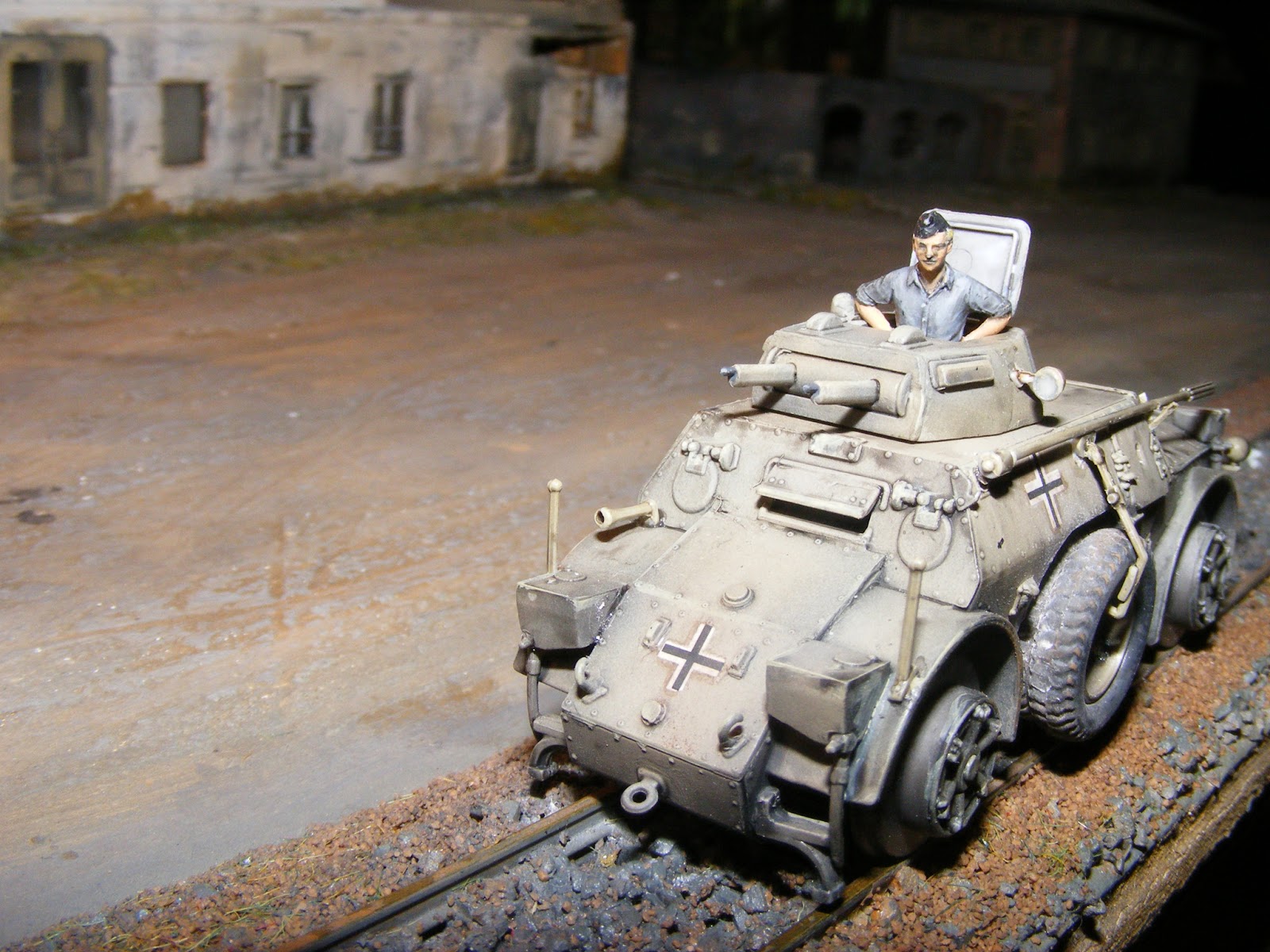 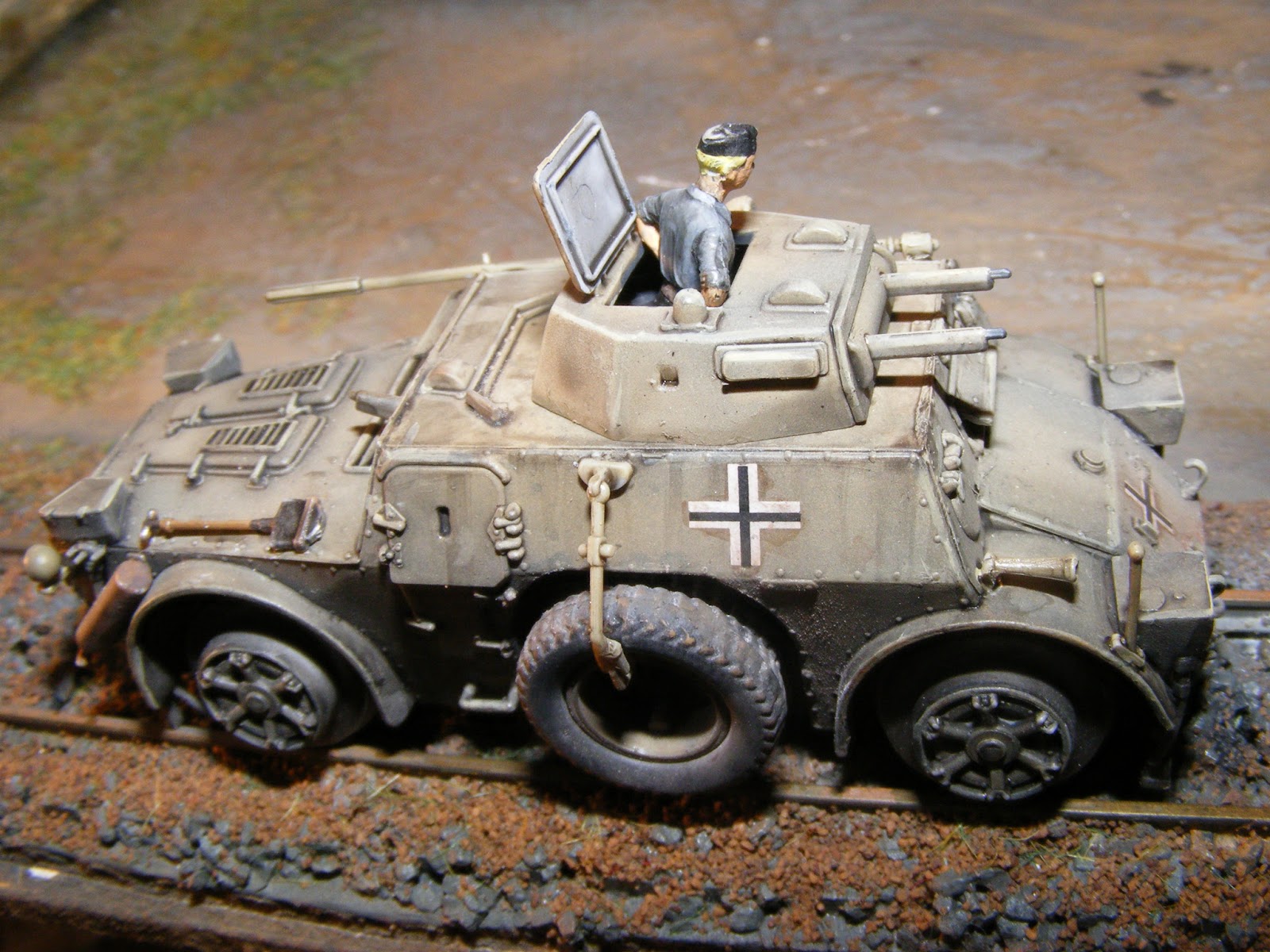 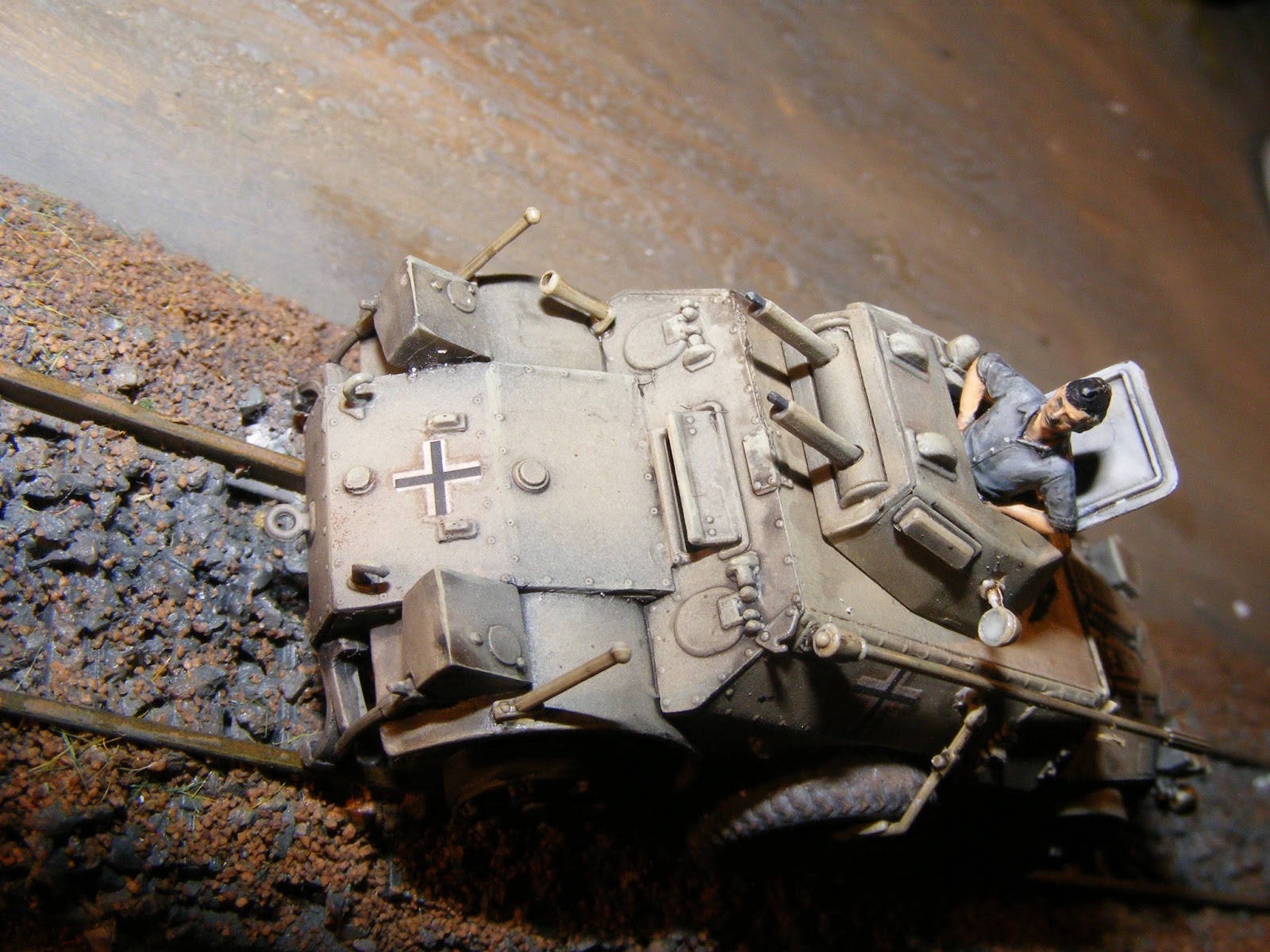 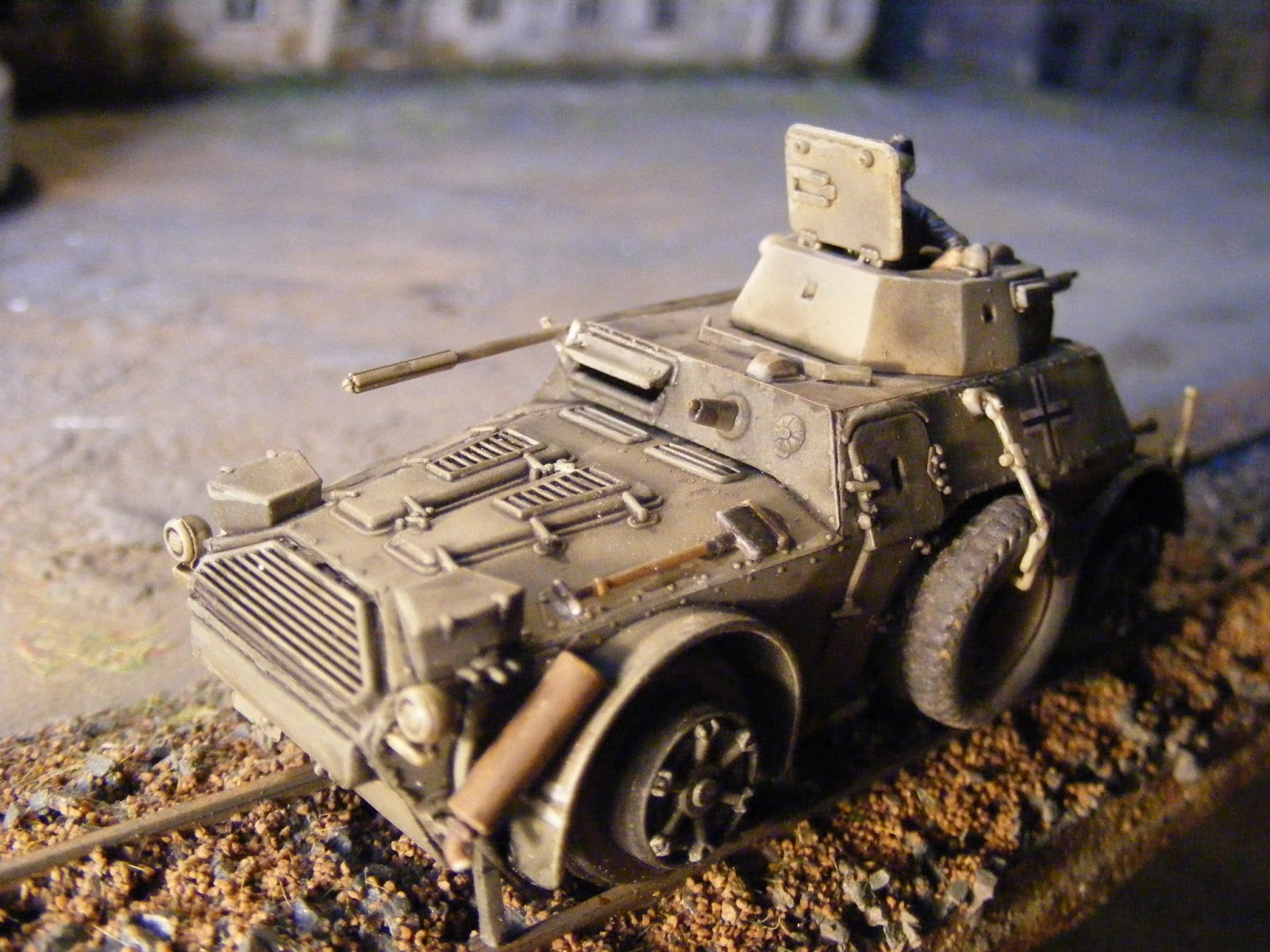 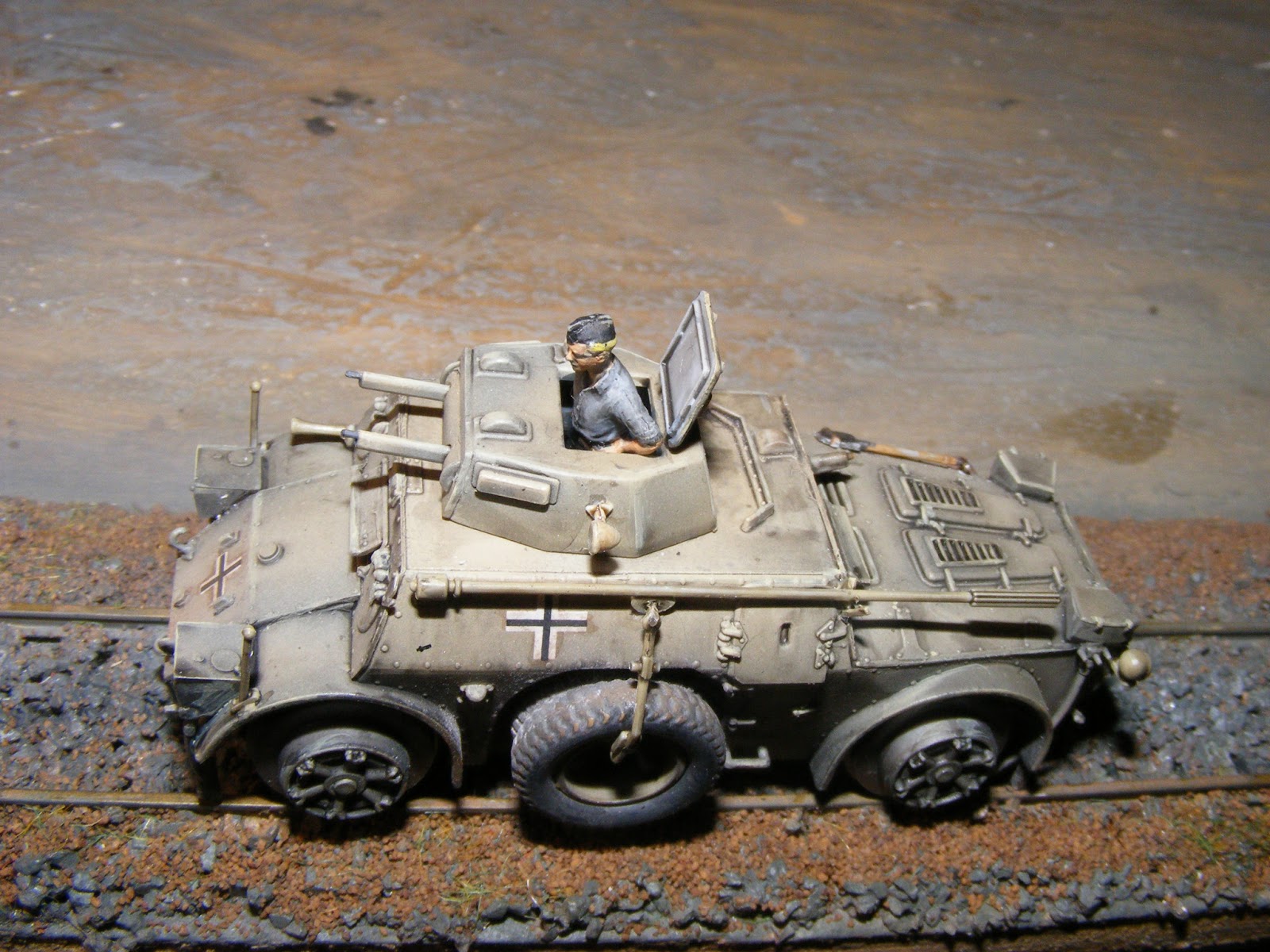