I bought this kit years ago, soon after it was released, and it has sat untouched ever since it arrived. Having recently built the S Models Kfz 13, I decided to dust off the box and get this one underway also, for interest and comparison.

The Kfz 14. This vehicle is virtually identical to the Kfz 13. Difference being that the pedestal mounted MG was removed, and a radio was installed, with a large frame aerial, and radio operators chair.

The Kit. The box contains 3 sprues of plastic parts, 1 sheet of decals, 1 set of instructions. 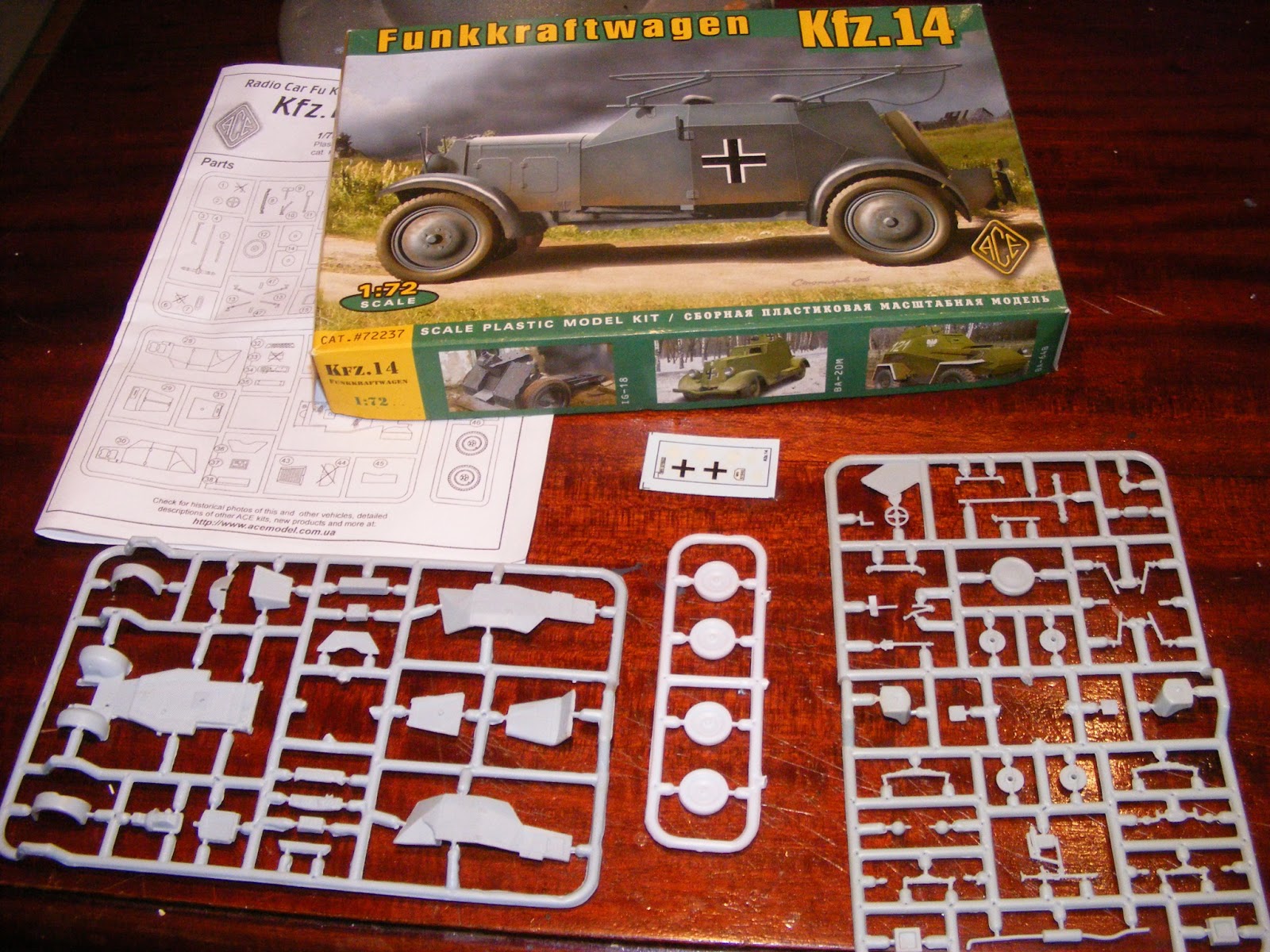 Assembly. As seems standard with ACE, assembly begins with the underchassis - axles, wheels, suspension and drive train. Most of these parts have a fairly pronounced seam line, similar to whats found on other ACE kits with chassis, so some cleanup with a knife blade required. I found the rear axle springs needed a small piece of evergreen rod (about 1.5mm) added to where they join the chassis frame. This is to ensure the vehicle sits level, and does not sit low in the rear. 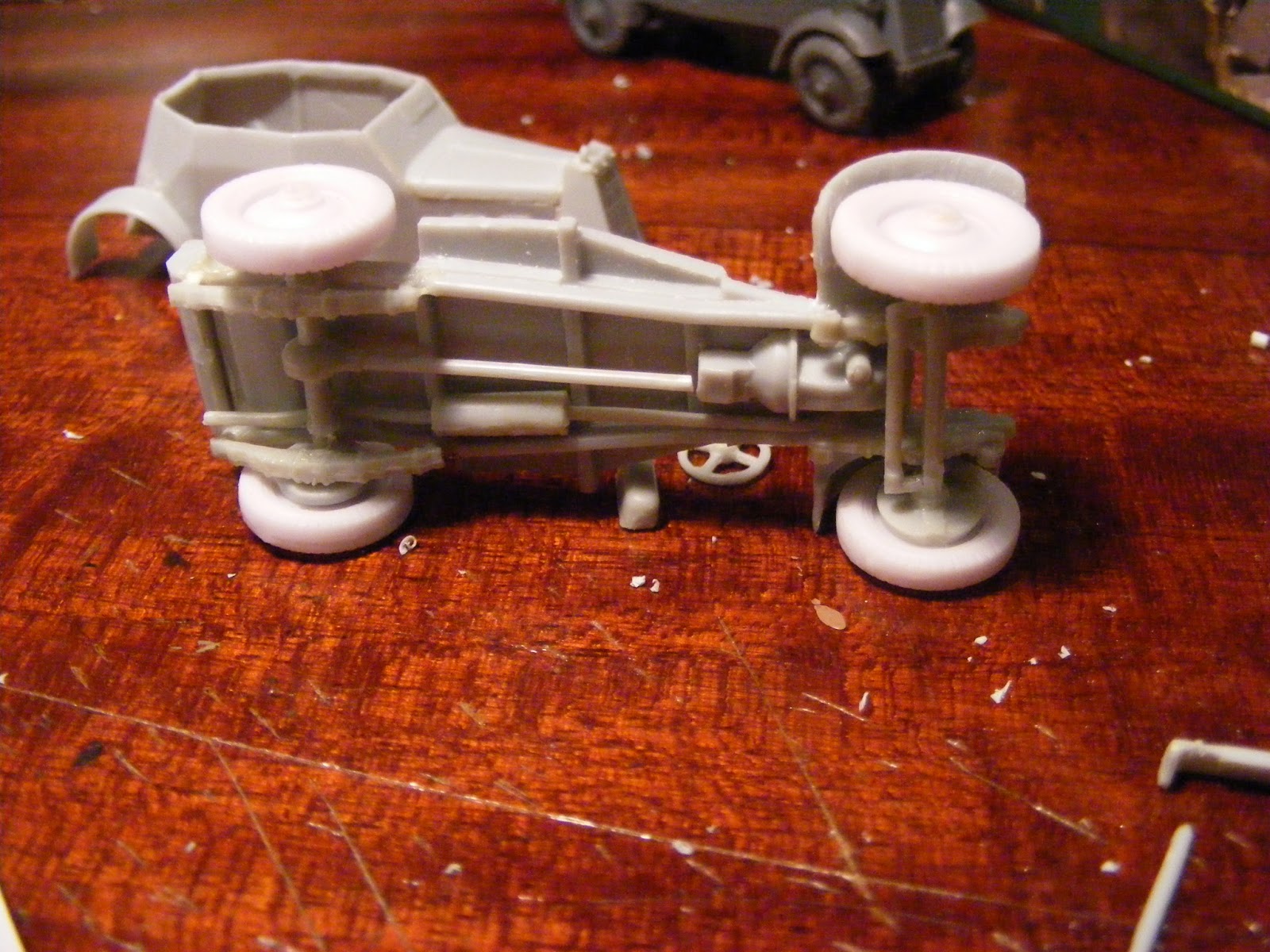 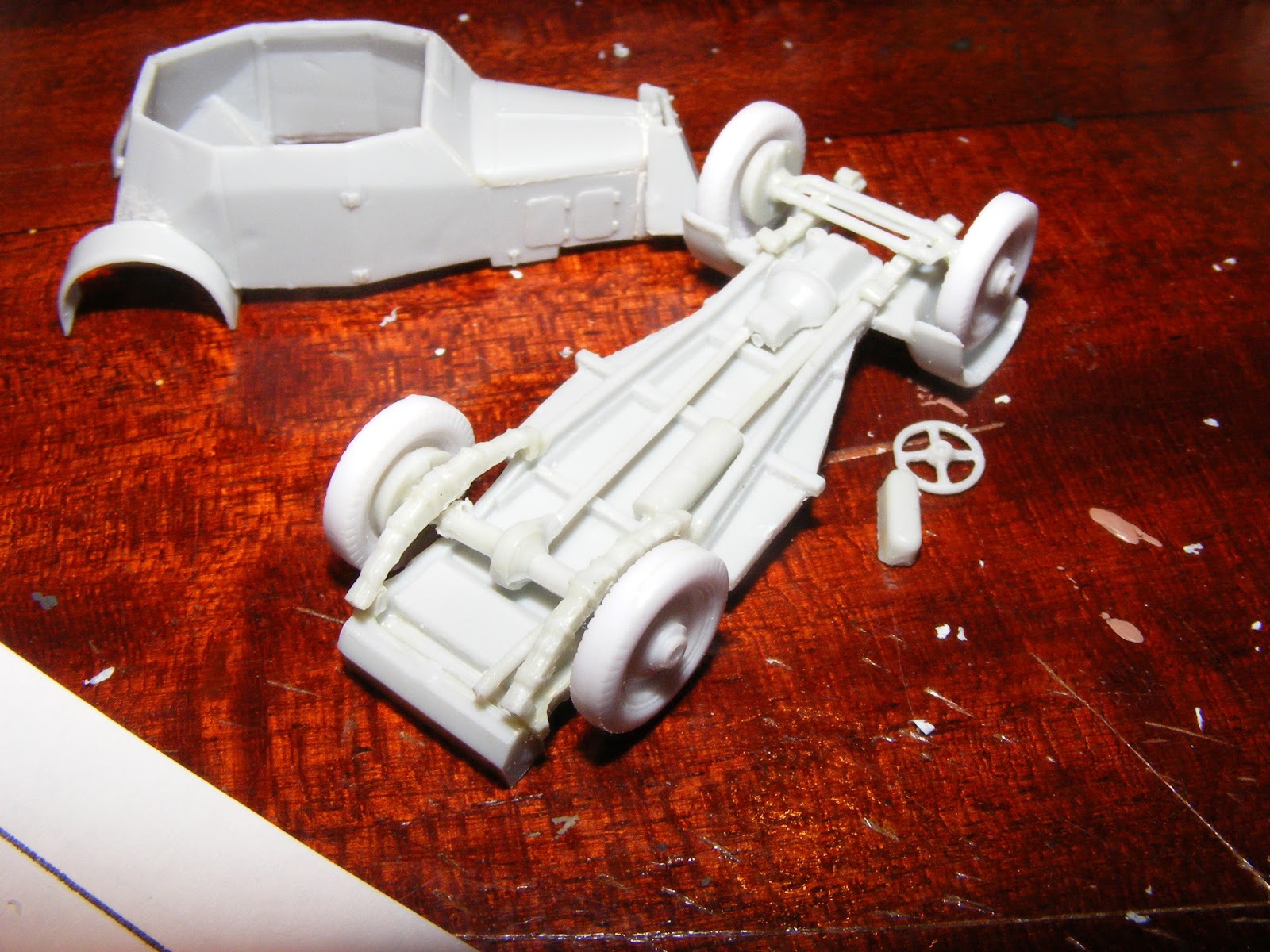 The front and rear mudguards are quite thick in profile. I slimmed these down by careful scraping of the inside edge with a sharp blade, and then ensured the smooth inner curve was retained by careful sanding with some fine paper. This improved the fit of the wheels inside the mudguards and the appearance of the mudguards. I also slimmed down the edges of the panels that make up the top edge of the cabin, to improve the appearance when looking down into the vehicle.

The actual fit of the body panels is quite good - better than most ACE kits. A tiny bit of filler and sanding was needed where the sides met the front drivers panel and the rear panel, though the rear panel joins are almost obscured by the spare wheel anyway. 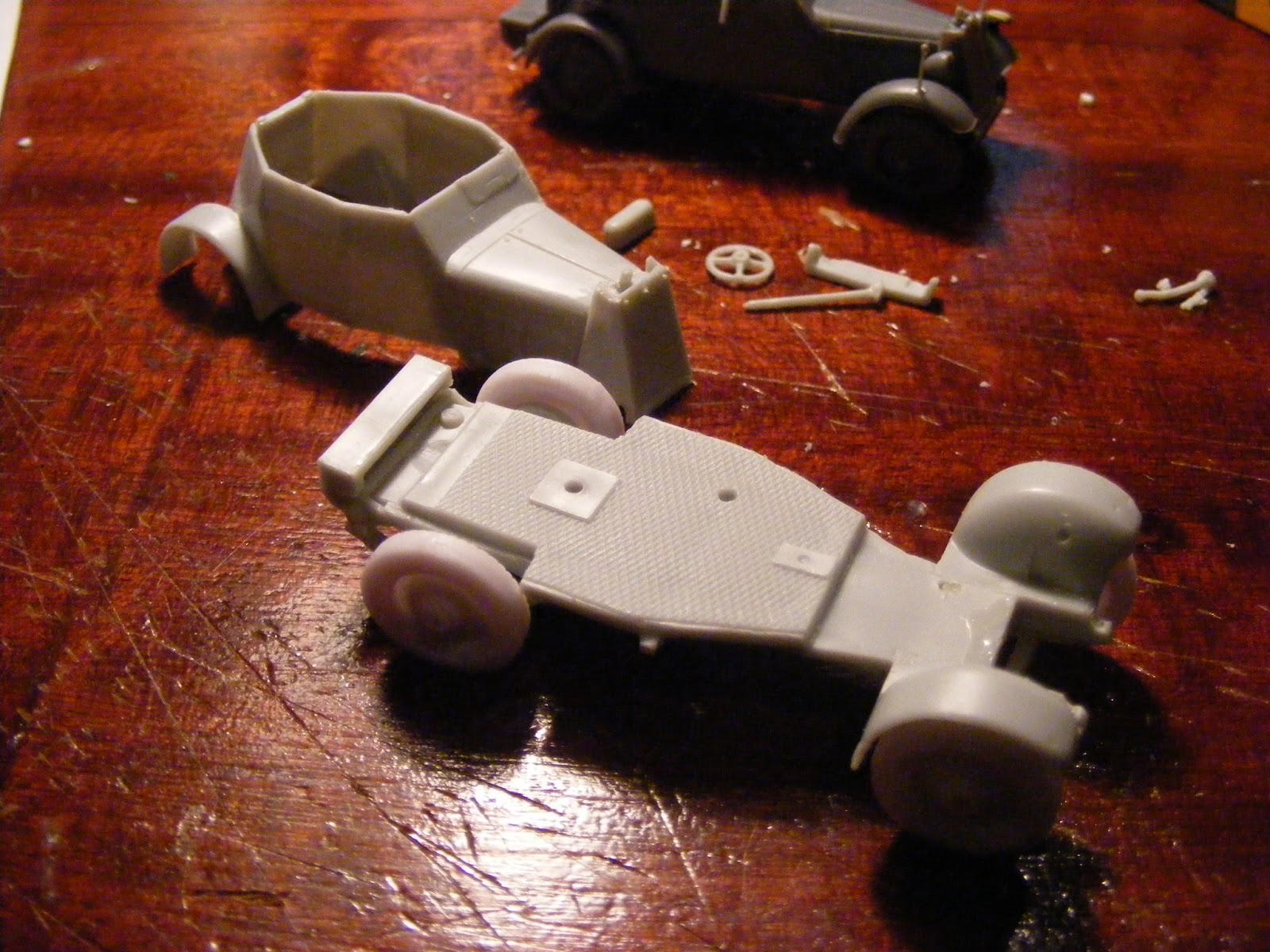 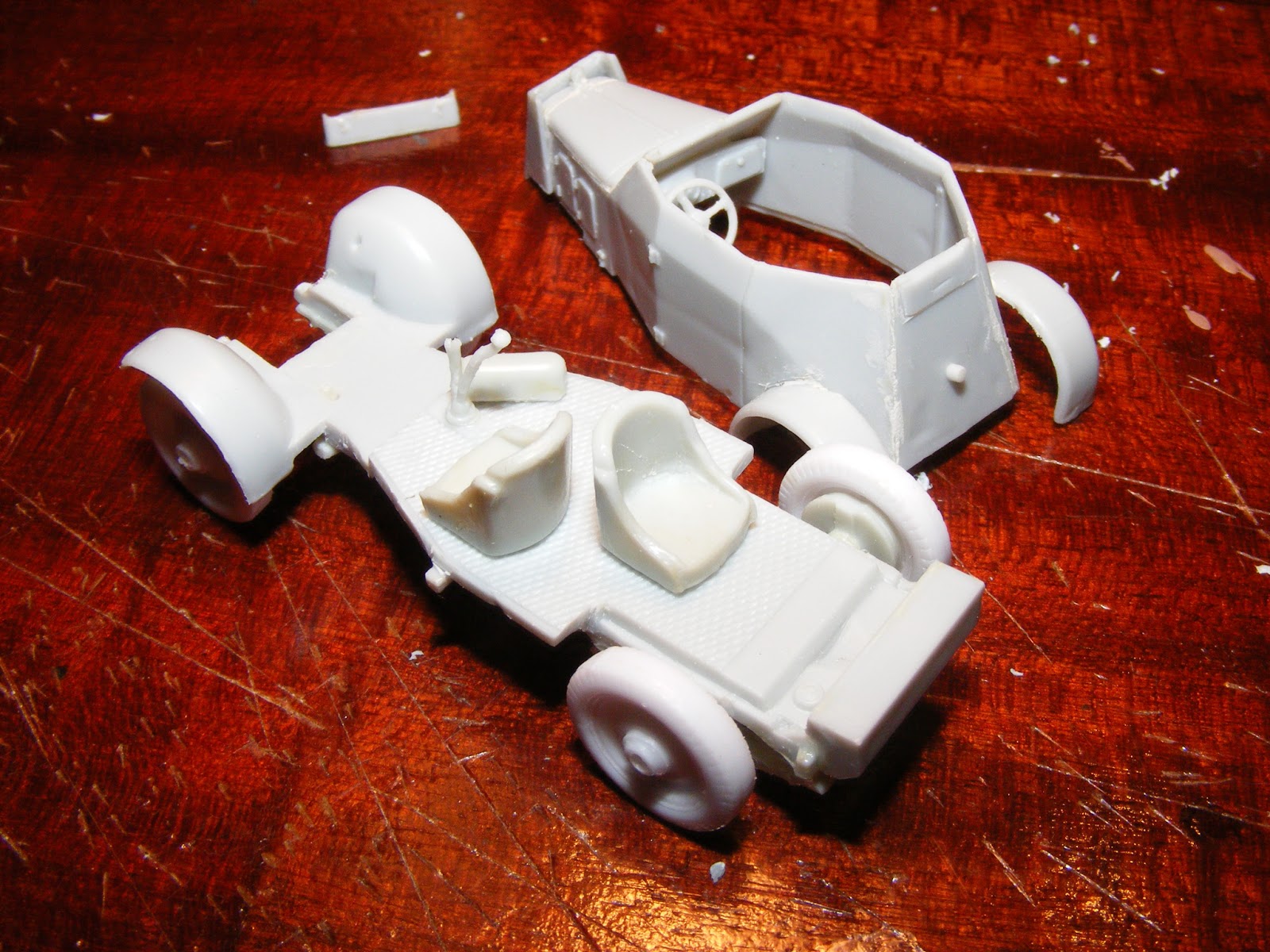 The kit comes with the turn indicators, rear storage boxes, dashboard with details, and exhaust assembly & tread plate moulded into cabin floor - all pieces that don't come with the S Model Kfz 13 kit.

Omissions. The 4 support legs for the aerial are supplied, and the modeller is advised to make an aerial from 1mm wire (not supplied). Also no front width markers or rear view mirror is supplied - the instructions advise to use pins to make the markers.

I made the aerial from Evergreen 0.5 mm rod bent with tweezers into a rectangle shape then glued, then affixed to the support arms (which were first attached to the vehicle). I'd suggest that 1.0mm would look a little too heavy for the aerial. I added a single strand of thin copper wire from the aerial to the radio. The wire strand was taken from a multi strand copper cable from an old broken TV set.

If you decide to skip the aerial, the pedestal machine gun is included on the sprues, so the vehicle can be assembled as a Kfz 13.

I made width markers and rear view mirror support from stretched sprue with a ball atop each one sourced from a Brita Water Filter. Each filter contains thousands of tiny balls of varying diameters - perfect for Braille Scale projects. The round mirror was made from a thin slice of evergreen rod, the hole filled with Testors Window Maker which also holds the mirror to its rod.

The internal grab rail across the front was made with 0.50mm rod curved and glued in place.

Wheel hub stubs were supplied in the kit. I chose to use Evergreen rod as I found it easier and a bit tidier looking. 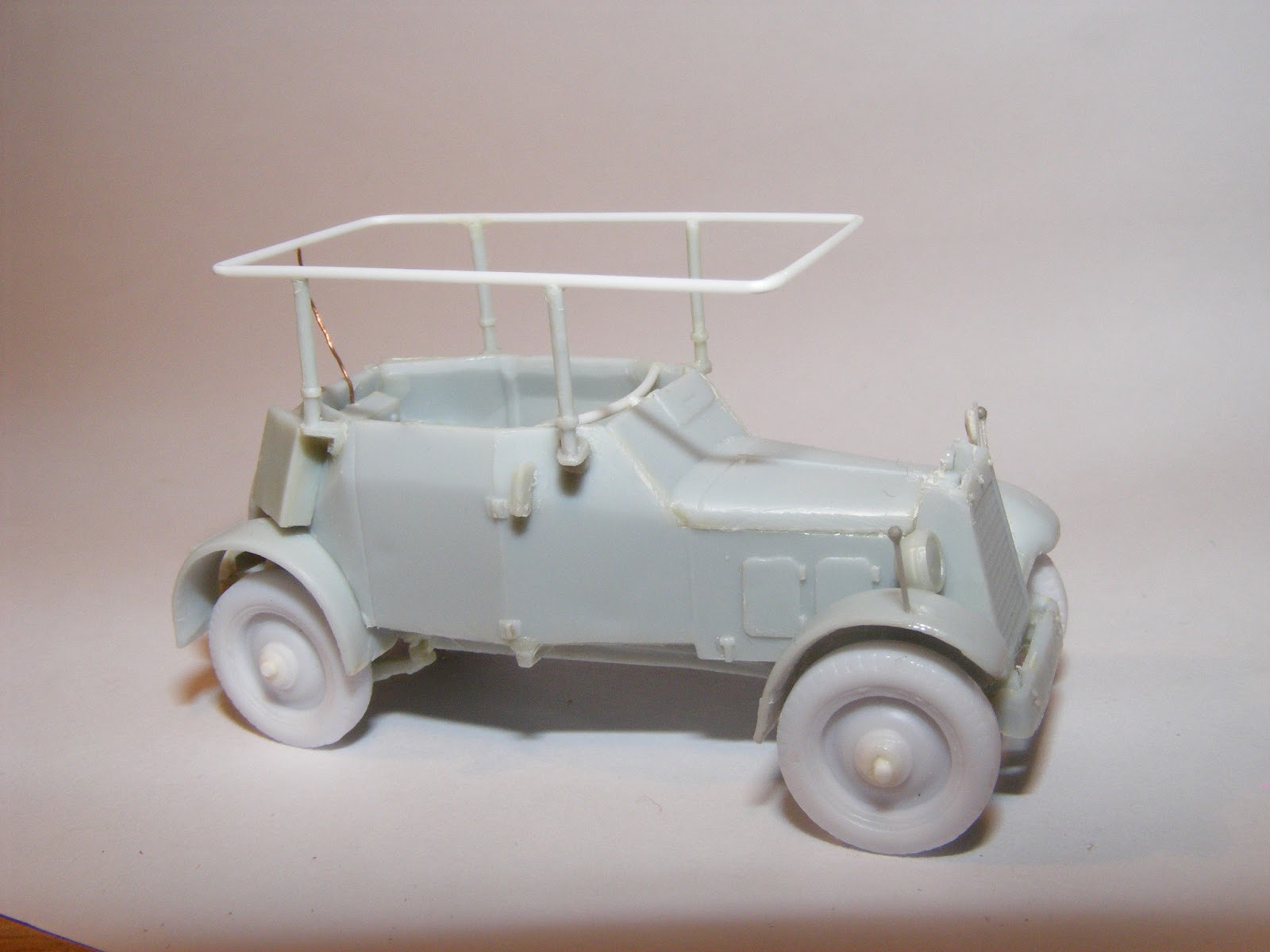 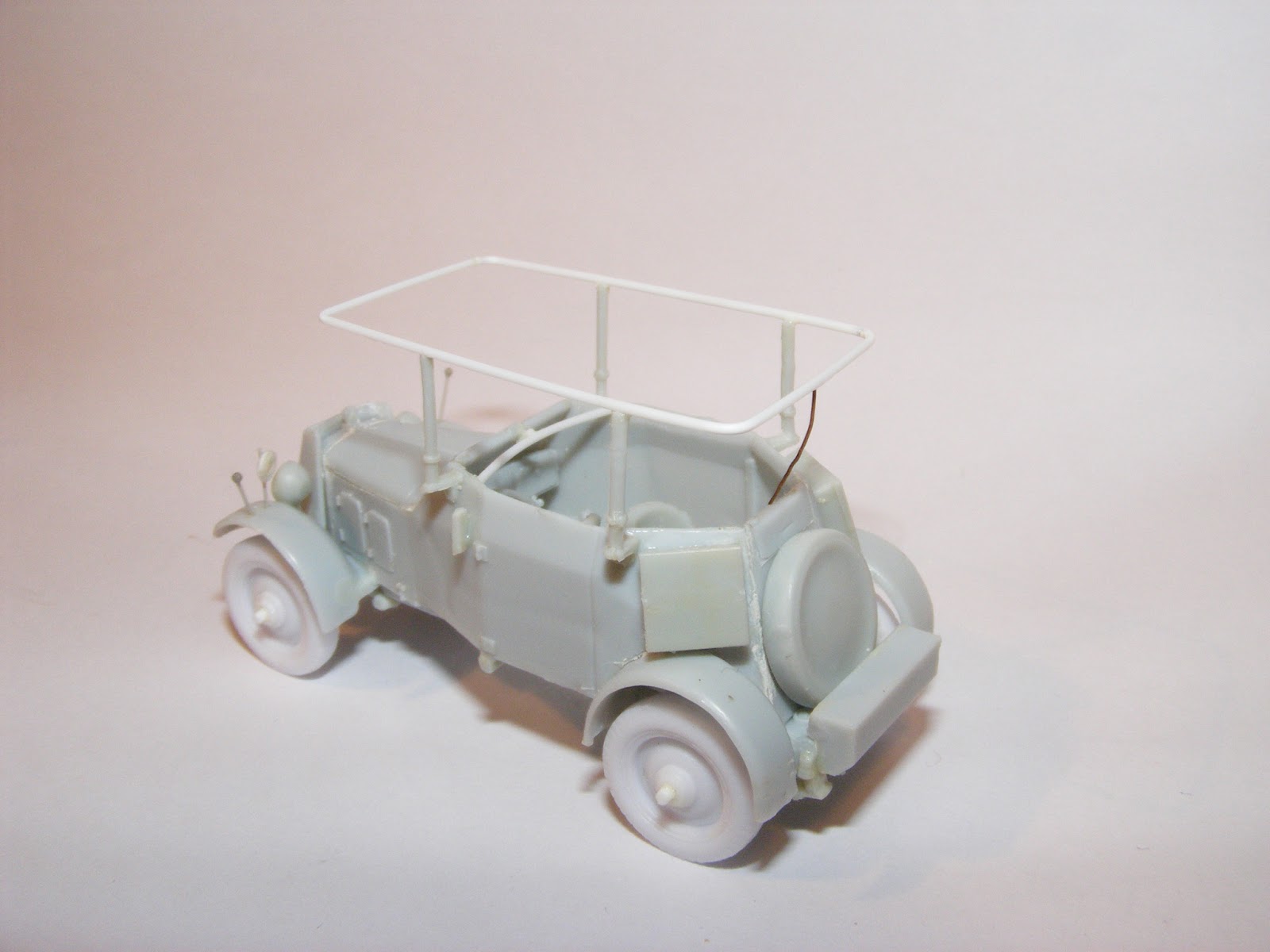 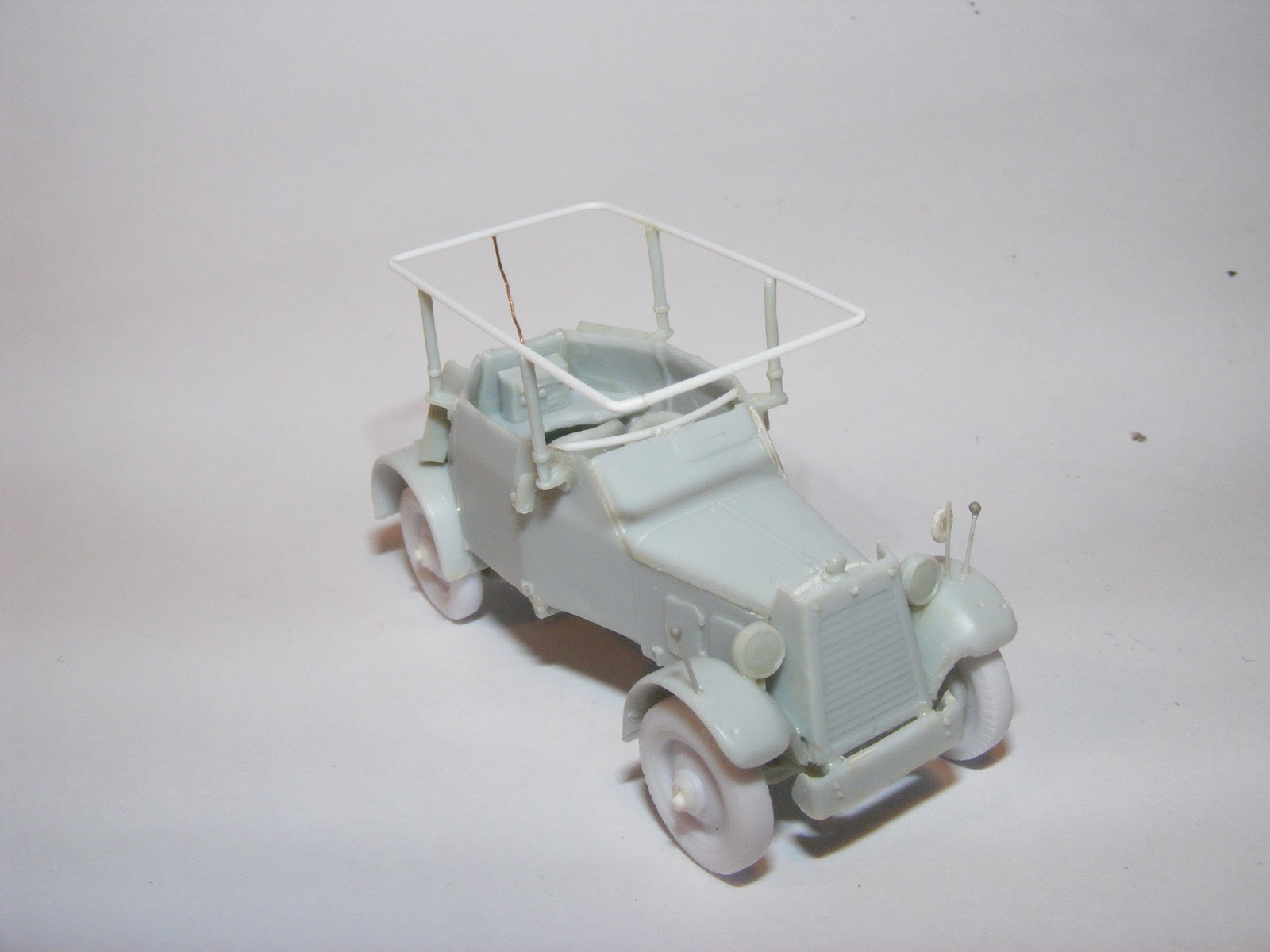 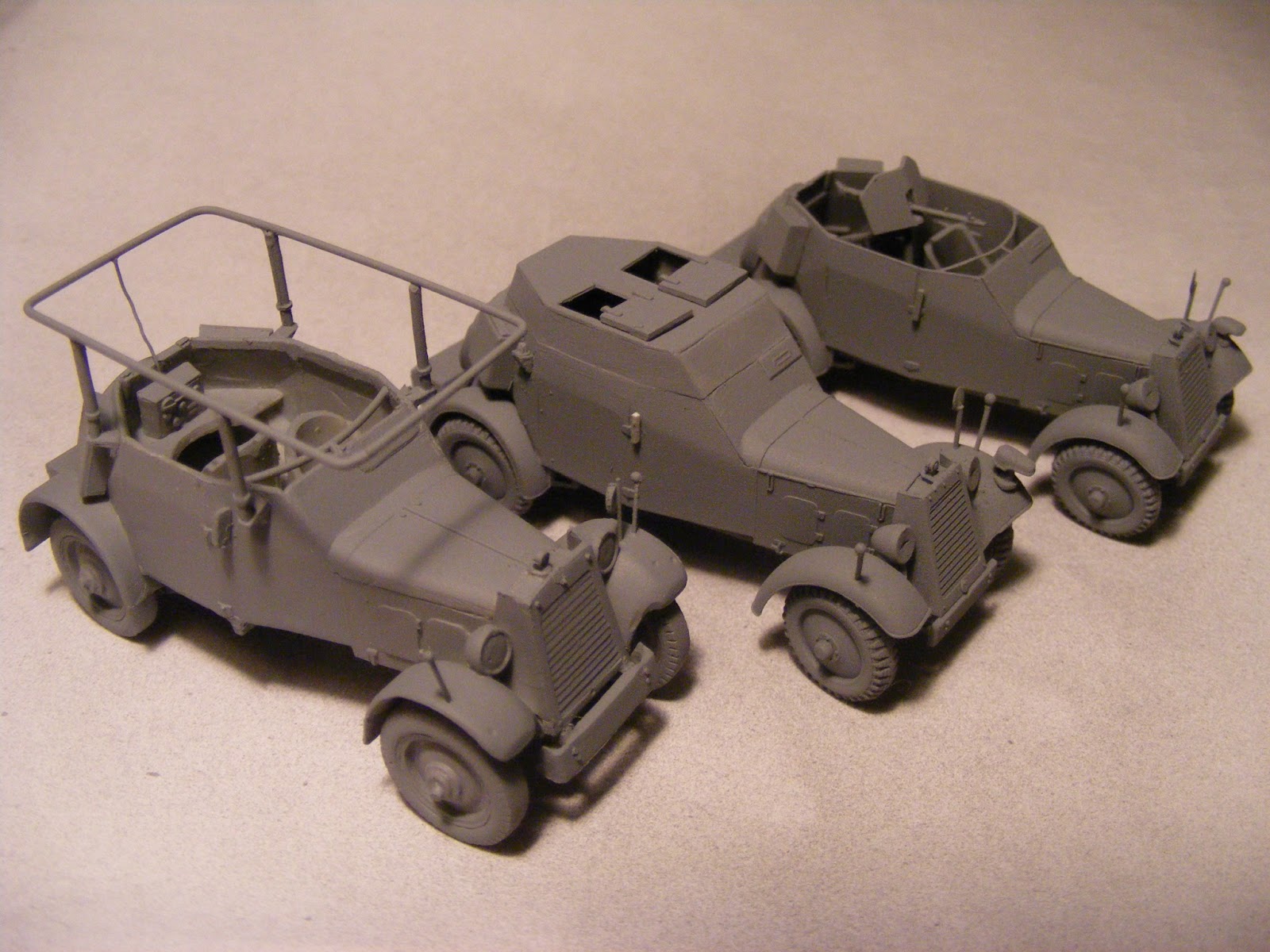